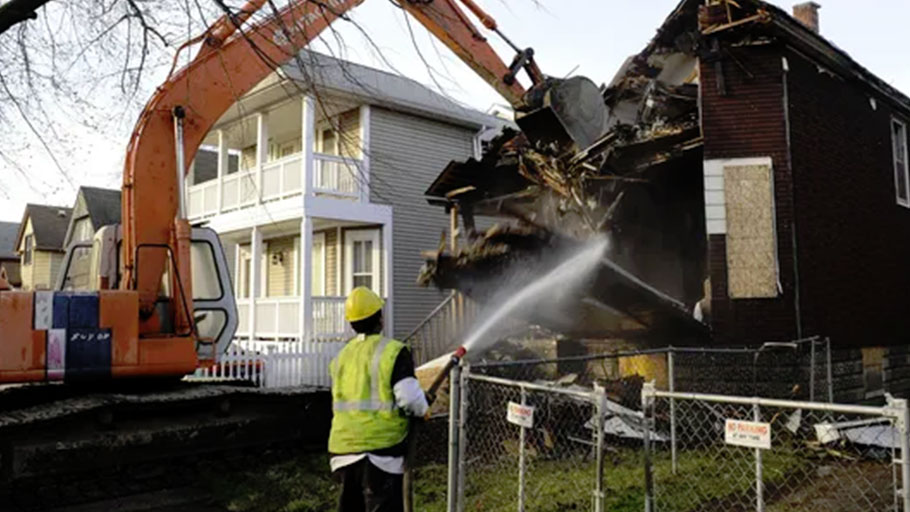 You Are Here: Home » Blog » Commentaries/Opinions » ‘The Divided City’ warns of Detroit’s inequality

In Michigan, which accounts for nearly half of all committed federal funds for blight demolition, the average cost paid with federal dollars increased by 90 percent in less than three years. (Photo: Detroit News file photo)

Despite the revival taking place in cities like Detroit, Baltimore and Pittsburgh, they are being turned into “places of growing inequality where small, glittering enclaves of prosperity are ringed by larger areas of decline and where millions are relegated to lives of poverty and hopelessness.”

That’s the message historian and author Alan Mallach conveys in his new book, “The Divided City: Poverty and Prosperity in Urban America,” which makes him the latest national expert to add his voice to the growing list of those concerned about where things are right now in Detroit.

Mallach will take the stage at the Detroit Economic Club meeting on Tuesday, Feb.12 at the Masonic Temple. He will be joined by Maurice Cox, Detroit’s planning and development director. I will moderate the discussion, which will focus on the economic challenges facing Detroit and other urban cities and what needs to be done to remove the barriers to equality.

“I think massive, concentrated poverty is the single most serious problem facing Detroit today. Detroit is the poorest American major city. It has among the lowest house prices and rents of any major city in America, yet 1 out of 3 Detroit renters spends 50 percent or more of their income in rent,” Mallach said. “Creating opportunities — through job growth and workforce development — for adults to escape poverty, or future opportunities for children to move out of poverty through education, should be, in my opinion, the city’s highest priority. And, for all the excitement about downtown revitalization, that has little effect on the great majority of Detroit residents, particularly the poor ones.”

Mallach’s assessment of the city, which he documents in the 326-page book, is reflective of a growing belief and general understanding among many that we can no longer sugarcoat the recovery of Detroit by ignoring endemic poverty. And we should not be in denial of the “two Detroit” phenomenon even if it does not fit our public relations spin.

Asked if any of the cities featured in his book are taking proactive steps to combat inequality, the author gave a frank answer.

“I think it’s beginning but it hasn’t gone very far yet,” Mallach said. “I see a lot of cities talking about it, and taking small steps, but so far no one with a serious, concerted strategy.”

To tackle the forces of inequality haunting the city’s recovery, we must first admit that there is a large-scale poverty problem in Detroit. Then work to address it no matter how hard the subject is because what is taking place in the city mirrors a national trend.

But it is important for the Detroit Economic Club to bring such a vital discussion about the city’s future before an unlikely audience. The city can’t experience true economic growth for all if those with economic influence are not willing to participate in anti-poverty conversations to determine how we obtain real and decisive progress.

“Urban inequality is one of the most complicated and important issues of our time. Cities that can figure out how to spread booming downtown development to its neighborhoods will win,” DEC president and CEO Steve Grigorian said. “The Detroit Economic Club members are looking forward to hearing Alan Mallach and Maurice Cox talk about policies, tools and plans that can chart a more equitable development path for all Detroit residents.”

The conversations about solutions and determining effective and assertive strategies to tackle the issues should not be infrequent. The challenges are deeper and more pernicious and would require direct and bold actions to make lasting and positive differences in the lives of many Detroiters.

After all, it is also a matter of will to see a systemic change. The alarming statistics about the well being of the city continue to contradict the resurgence taking place because it tells a different story of the recovery.

Catch “Redline with Bankole Thompson,” which is broadcast at noon weekdays on Superstation 910AM.