The hidden hand of the US blockade sparks Cuba protests

You Are Here: Home » Blog » Commentaries/Opinions » The hidden hand of the US blockade sparks Cuba protests 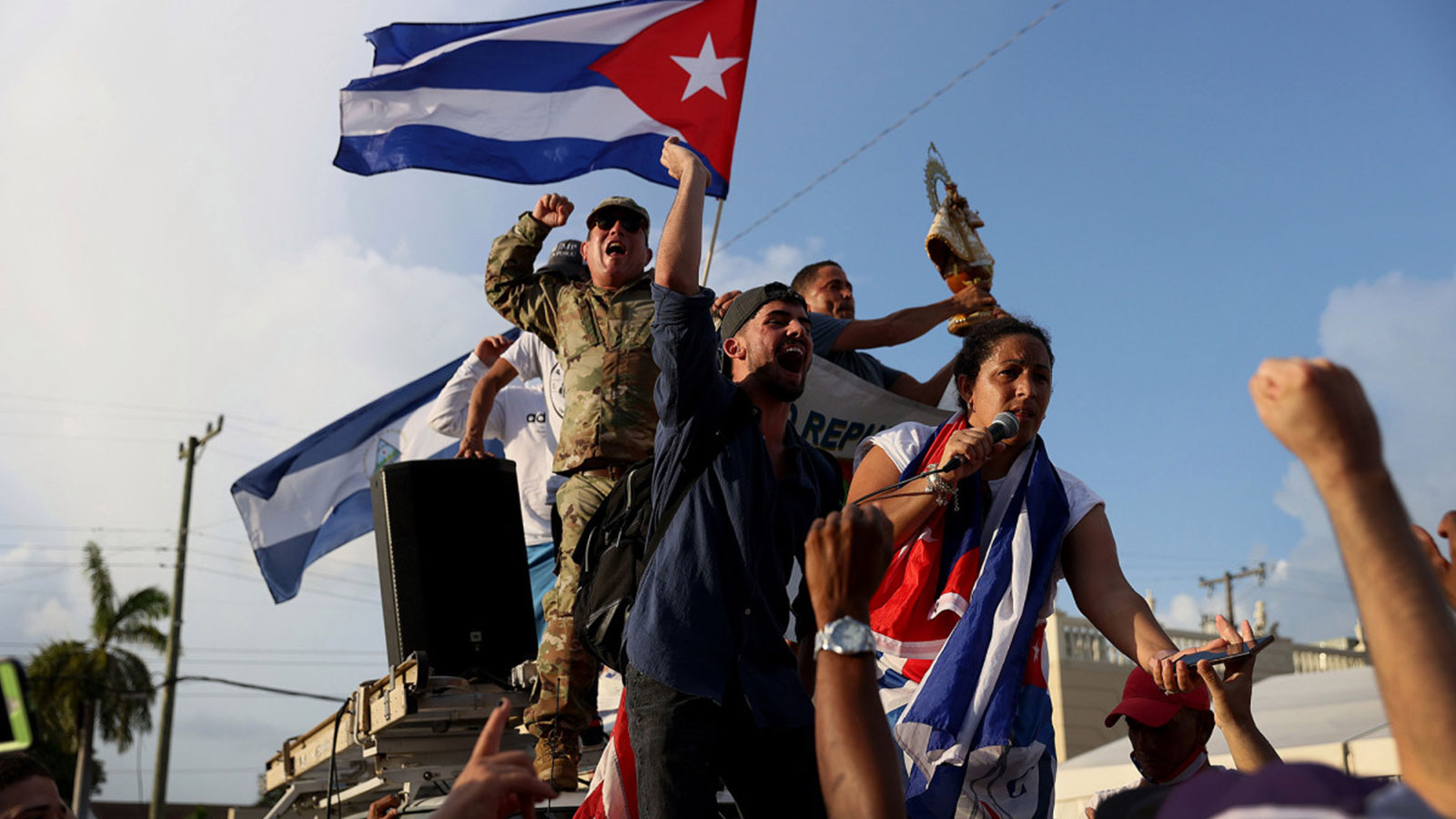 The protests should be understood in the context of a brutal economic war waged by the United States against the island nation for more than 60 years.

Protests erupted in various Cuban cities the weekend of July 11 over dire economic conditions and a surge in Covid-19 cases. They are the biggest protests to hit Cuba in three decades, and they may well continue in the coming weeks. They come on the heels of artists’ protests in Havana at the end of 2020, and have extended to many parts of the island. But their scale has been exaggerated by the Western press and by Cuban Americans who have been predicting, for 60 years, the imminent fall of the Cuban government.

Media outlets like The New York Times wrote about “hundreds of Cubans” while Reuters described them as thousands. In either case, Cuba has a population of 11 million people. The protests pale in comparison, both in terms of turnout and in state repression, to mass mobilizations that have rocked Colombia, Haiti, Chile, Ecuador and other Latin American countries over the past few years—or even Portland, Oregon, or Ferguson, Missouri. Moreover, U.S. media have paid little attention to the counter protesters, who have gone out into the streets to express their support for the government and Cuban Revolution. This includes Cuban President Miguel Díaz-Canel, who marched in the streets of Havana after denouncing the protests as an attempt to “fracture the unity of the people.”

The protests should also be understood in the context of a brutal economic war waged by the United States against the island nation for more than 60 years. This was laid out clearly by the U.S. Deputy Assistant Secretary of State in 1960, when he explicitly called for “denying money and supplies to Cuba, to decrease monetary and real wages, to bring about hunger, desperation and overthrow of government.” This strategy has failed in its goal of regime change for decades, and it is unlikely to be successful now.

There is no denying that Cubans are facing very severe conditions at the moment. The country has been hit by blackouts, as well as shortages of medicine, food and other basic necessities. The food shortages haven’t led to hunger or famine, but people have to wait in long lines to obtain goods—often at inflated prices—and their diet is extremely limited.

In terms of health, even basic medicines and equipment like syringes are difficult to acquire. Additionally, there has been an increase in Covid-19 cases, particularly in the city of Matanzas. However, this surge—as onerous as it is on the people of Matanzas—should also be kept in perspective. Cuba, a nation of roughly 11 million people, has had fewer than 240,000 cases of Covid-19 and 1,537 deaths. By comparison, Ohio, which has a similarly sized population, has had 1.1 million cases and more than 20,000 deaths. Despite the shortages, Cuban health policies have protected the population from the worst of the pandemic. With 139 deaths from Covid-19 per million population, Cuba places among the best performers in the hemisphere, miles ahead of the 1,871 deaths per million in the United States. Furthermore, Cuba has already proven that two of the five Covid-19 vaccines that it is developing are successful in preventing coronavirus infections and has vaccinated over two million people with their locally produced vaccines.

The shortages are being used by proponents of regime change to accuse the Cuban government of failing its citizens. Even the Biden White House called on Cuba’s authorities to “hear their people and serve their needs at this vital moment rather than enriching themselves.” It is unclear who Biden thinks has been “enriching themselves” in Cuba, but any criticism of Cuba that does not include a thorough analysis of the internationally condemned U.S. blockade will miss the most important factor in why Cubans are currently undergoing such hardships.

This grassroots and political pressure might be derailed by a right-wing agenda that will seek to further punish Cubans in the name of saving them.

While the blockade has been in place for over six decades, it was tightened in significant ways under the Trump administration’s policy of “maximum pressure.” This strategy targeted Cuba’s tourism, energy and other key economic sectors. It even restricted the amounts of money Cuban Americans can send home and closed the Cuban branches of Western Union, the main vehicle for sending remittances. These policies have had a disastrous impact on the Cuban economy, especially when the Covid-induced shutdown of the tourist industry has deprived the island of billions of dollars and thousands of jobs. For its part, the Biden administration has been “reviewing” its Cuba policy for six months, all the while continuing Trump’s strategy of economic warfare that is designed precisely to create the shortages Cubans are now experiencing.

U.S. economic warfare on Cuba has always been coupled with other strategies to overthrow the Cuban government. These include assassination attempts, support for terrorists (like Luis Posada Carriles, who blew up a Cuban airliner in 1976, killing 73 people), an attempted invasion and millions of dollars spent on “soft” power. For example, the United States Agency for International Development (USAID) spends about $20 million a year funding dissident groups in Cuba. The U.S.-funded Office of Cuba Broadcasting, which runs the opposition networks Radio and TV Martí, has over 100 employees and an annual budget of about $28 million, broadcasting an endless stream of anti-government propaganda.

This propaganda extends to social media, where the hashtag #SOSCuba began trending in Florida days before the protests began. This suggests that there was a coordinated campaign to target the Cuban government and blame it for the hardships the Cuban people are facing. It is also reminiscent of a scandal that broke in 2020, when CLS Strategies, a company with State Department ties, was found to have flooded social networks with harmful fake news about leftist governments in Latin America.

This social media campaign appears to be working, but not in Cuba. Instead, it has riled up the anti-Cuba lobby and its supporters in Florida. Miami Mayor Francis Suarez has gone so far as to call for U.S. intervention. The truth is that what happens in Florida will likely have more of an impact on the Cuban people than what happens in Cuba itself.

While the protests are very unlikely to topple the Cuban government, they could have the potential to disrupt important progress being made to pressure the Biden administration into lifting the Trump-era sanctions and re-engaging with Cuba, just as the Obama administration did. For example, in March, 80 members of the House of Representatives sent a letter to President Biden urging him to end restrictions on travel and remittances without delay. Right now, a group of Cuban Americans, led by high school teacher and war veteran Carlos Lazo, is walking from Miami to Washington, D.C., to call for an end to the embargo. And as part of this anti-blockade pressure, thousands of Americans have donated about $500,000 to buy syringes for Cuba’s Covid-19 vaccinations.

This grassroots and political pressure might be derailed by a right-wing agenda that will seek to further punish Cubans in the name of saving them. It would not be surprising to see President Biden cave to the right and maintain the cruel sanctions. Judging by the White House statement, President Biden is putting crass political calculations that deal with domestic politics ahead of the well-being of 11 million Cubans.

But by continuing the sanctions, Biden may well find himself dealing with a Cuban migration crisis. Over the past few months, the U.S. Coast Guard has reported an increase in the number of rafts sailing from Cuba to Florida. Nearly 500 would-be migrants have been returned to Cuba by U.S. authorities in 2021, compared to 49 people last year. As long as the Cuban economy continues to be battered by U.S. sanctions, more Cubans will attempt the treacherous overseas journey. This has the potential to become a crisis that will damage the Biden administration, given its recent focus on deterring migration.

With the stroke of a pen, Biden could lift all of the coercive measures that Trump put in place. This would save Cuban lives, and it could begin to reset Biden’s foreign policy on the more diplomatic path that Obama finally started to embrace in his second term, but which Biden has so far rejected toward Cuba, Venezuela, Iran, China and other self-inflicted problem areas in U.S. foreign policy.

Medea Benjamin, co-founder of Global Exchange and CODEPINK: Women for Peace, is the author of the 2018 book, “Inside Iran: The Real History and Politics of the Islamic Republic of Iran.” Her previous books include: “Kingdom of the Unjust: Behind the U.S.-Saudi Connection” (2016); “Drone Warfare: Killing by Remote Control” (2013); “Don’t Be Afraid Gringo: A Honduran Woman Speaks from the Heart” (1989), and (with Jodie Evans) “Stop the Next War Now (Inner Ocean Action Guide)” (2005).

Leonardo Flores is a Latin American policy expert and campaigner with CodePink.