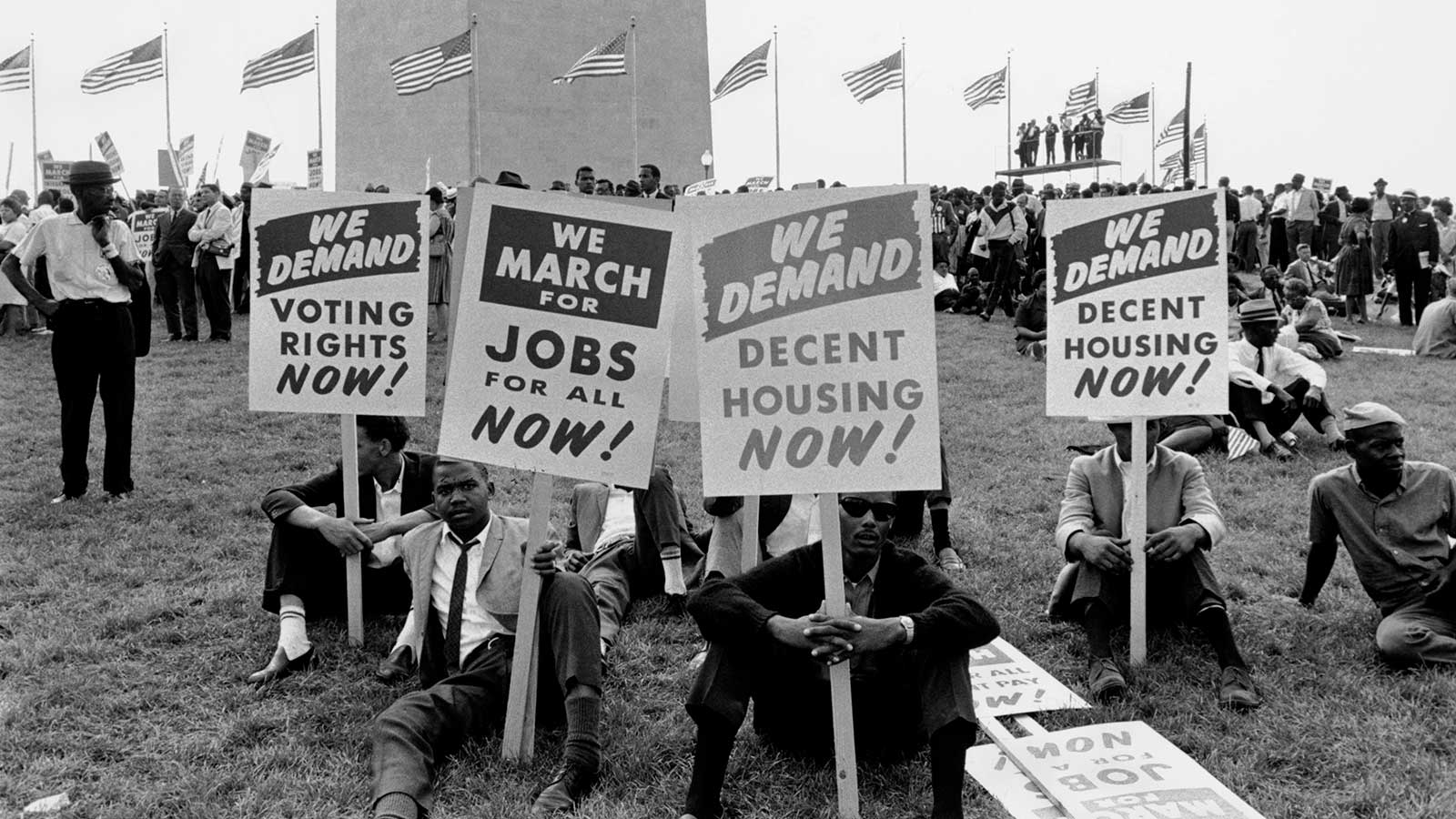 You Are Here: Home » Blog » Commentaries/Opinions » The myth of class-reductionism

The fight for racial and gender justice has always been about economic inequality, too.

Ever since Bernie Sanders’s insurgent run for the Democratic presidential nomination in 2016, a specter has haunted left-liberal debate: the specter of “class reductionism.” Left-identitarians and centrist liberals have used this oversimplified charge not merely to dismiss Sanders but also to cast suspicion on the broad array of universally redistributive policies associated with him and the left flank of the Democratic Party—such as Medicare for All, free public higher education, a living wage, and the right to collective bargaining.

Politics often makes strange bedfellows, but this is no mere marriage of convenience. Centrist Democrats and left-identitarians are bound in shared embrace of a particularist, elite-driven politics. This top-down political vision—long focused on capturing the presidency at the expense of long-term, movement-driven, majoritarian strategies at all levels of government—threatens to preempt hopes of restoring the public-good model of governance that was at the heart of postwar prosperity and foundational to the civil rights movement.

Class reductionism is the supposed view that inequalities apparently attributable to race, gender, or other categories of group identification are either secondary in importance or reducible to generic economic inequality. It thus follows, according to those who hurl the charge, that specifically anti-racist, feminist, or LGBTQ concerns, for example, should be dissolved within demands for economic redistribution.

I know of no one who embraces that position. Like other broad-brush charges that self-styled liberal pragmatists levy against “wish-list economics” and the assault on private health insurance, the class reductionist canard is a bid to shut down debate. Once you summon it, you may safely dismiss your opponents as wild-eyed fomenters of discord without addressing the substance of their disagreements with you on policy proposals.

Although there are no doubt random, dogmatic class reductionists out there, the simple fact is that no serious tendency on the left contends that racial or gender injustices or those affecting LGBTQ people, immigrants, or other groups as such do not exist, are inconsequential, or otherwise should be downplayed or ignored. Nor do any reputable voices on the left seriously argue that racism, sexism, homophobia, and xenophobia are not attitudes and ideologies that persist and cause harm.

“Class reductionism” is, in other words, a myth. It is a caricature rooted in hoary folk imagery, likely as not originating in tales of late-1960s debates during the raucous disintegration of Students for a Democratic Society (SDS), as a clutch of nominal socialists insisted that any distinct focus on racial and gender injustice would undermine the greater political goal of working-class unity. But even at its height, this view only gained currency among a very small cohort of sectarian dogmatists. Throughout the first half of the twentieth century, Communists, Socialists, labor-leftists, and Marxists of all stripes characteristically were in the forefront of struggles for racial and gender justice. And that commitment was natural, because such leftists saw those struggles as inextricable from the more general goal of social transformation along egalitarian lines; they properly understood the battles for racial and gender equity as constitutive elements of the struggle for working-class power. Class reductive leftism is a figment of the political imagination roused by those who have made their peace with neoliberalism.

Black, female, and trans people tend to be disproportionately working class. So any measure to advance broad downward economic redistribution—from Medicare for All to a $15 hourly minimum wage—can’t coherently be said to thwart the interests of women, racial minorities, or other identity groups. What’s more, this brand of class denialism artificially separates race, gender, and other ascriptive identities from the basic dynamics of American capitalism. True, African Americans, Latinos, and women are disproportionately poor or working class due to a long history of racial and gender discrimination in labor and housing markets—conditions that have worsened alongside the postwar deindustrialization of American cities. But this means that these populations would benefit disproportionately from initiatives geared to improve the circumstances of poor and working-class people in general.

That is why, as historian Touré F. Reed (who I should disclose is also my son) points out, mainstream civil rights leaders through the 1930s and 1940s “argued that precisely because most blacks were working class, racial equality could only be achieved through a combination of anti-discrimination policies and social-democratic economic policies.” The rise of Cold War anti-communism

had a chilling effect on class-oriented civil rights politics, setting the stage for analyses of racism that divorced prejudice from economic exploitation—the fundamental reason for slavery and Jim Crow. Indeed, this was the era in which racism was recast as a psychological affliction rather than a product of political economy. As McCarthyism receded by the end of the 1950s, however, mainstream black civil rights leaders once again identified economic opportunity for all—decent-paying jobs and social-democratic policies—as essential to racial equality. The black organizers of the 1963 March on Washington for Jobs and Freedom (it is telling that “Jobs and Freedom” are no longer part of collective reflections on the march), [A. Philip] Randolph and Bayard Rustin—both of them socialists—were very clear about this.… This is why the [march’s] demands included not just anti-discrimination measures but a full-employment economy, jobs programs, and a minimum-wage increase.

As American politics shifted steadily rightward between the Nixon and Clinton presidencies, so, too, did the discourse surrounding race and the country’s political economy. Conservatives attributed black socioeconomic inequalities to bad values; liberals attributed them to bad values and racism. Once it was effectively decoupled from political-economic dynamics, “racism” became increasingly amorphous as a charge or diagnosis—a blur of attitudes, utterances, individual actions, and patterned disparities, an autonomous force that acts outside of historically specific social relations. Today it serves as a single, all-purpose explanation for mass incarceration, the wealth gap, the wage gap, police brutality, racially disproportionate rates of poverty and unemployment, slavery, the Southern Jim Crow regime, health disparities, the drug war, random outbursts of individual bigotry, voter suppression, and more.

The obvious racial disparities are cause for concern, but the way forward is precisely through the kinds of social and economic policies that address black people as workers, students, parents, taxpayers, citizens, people in need of decent jobs, housing, and health care, or concerned with foreign policy—not to homogenize them under a monolithic racial classification. Thanks to this misguided reflex, we now routinely act as though initiatives directed to address working-class concerns can’t suffice for African Americans, since they’re class reductionist and therefore racially exclusionary. Ironically, as Touré Reed also points out, this perspective is race reductionist: It presumes that key policies and initiatives must always and everywhere be tailored to singularly African American-branded issues in order to appear to address African Americans’ needs.

As Cedric Johnson and Dean Robinson have argued, post-civil rights black politics has tended to emphasize an “ethnic group” notion of racial solidarity that masks the face that this race politics is itself a class politics. Black Democratic and other neoliberal elites have shown again and again in their sustained denunciations of the Sanders program since 2016 that they ultimately rely on race-specific arguments to oppose broadly redistributive initiatives that would improve the circumstances of African American working people along with all others. Ironically, this means that the constituencies most affected by economic inequality and disadvantage have the least voice in contemporary policy debates.

Class reductionism, again, is a myth. But like other myths, it reveals a great deal about our deeper systems of belief. Even if it tells us nothing about the people who are accused of it, it tells us a great deal about the accusers—the professional-managerial guardians of elite discourse. Most of all, the class reductionist myth gives powerful expression to the class-bound desire to address the supposed interests of women, racial minorities, and other marginalized populations at the expense of broad, downward economic redistribution. Nothing declares one’s own class allegiances more eloquently, after all, than the accusation that one’s opponents care only about class.