The Radical Practicality of Reparations

You Are Here: Home » Blog » Commentaries/Opinions » The Radical Practicality of Reparations 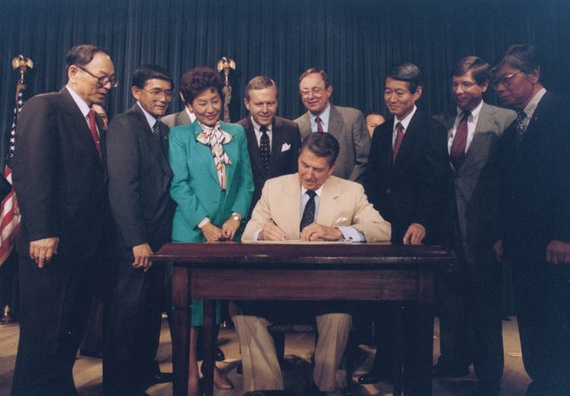 David Frum has posted a rebuttal to my argument in favor of reparations. I appreciate David’s engagement with the issue. I often miss the old days when The Atlantic‘s writers would engage each other in running debate, so I’m happy for the chance to get back into that kind of conversation here.

David grounds his rebuttal in The Philadelphia Plan, an affirmative action program which David believes qualifies as reparations. I disagree. The Philadelphia Plan was an attempt to end job discrimination among firms doing business with the federal government. Originally it was isolated to the building trades in Philadelphia. This was not a mistake. “The NAACP wanted a tougher require; the unions hated the whole thing,” said White House aide John Ehrlichman. “Before long, the AFL-CIO and the NAACP were locked in combat over one of the passionate issues of the day and the Nixon administration was located in the sweet and reasonable middle.”

More importantly, The Philadelphia Plan was focused on ending present racist discrimination, not compensating for the past. In Philadelphia, a city that was 30 percent black, there were 12 minority unionized ironworkers and three black pipe-fitters. There was no black unionized work among the sheet metal trades, elevator constructors, or the stone-masons. From the perspective of reparations, one might calculate how much this discrimination had cost Philadelphia’s black community and then attempt to compensate them. The Philadelphia Plan did not do this. Indeed Fletcher went so far as to declare himself neither interested in compensation nor “a fruitless debate about slavery and its debilitating legacy.” The Philadelphia Plan was no more reparations than school busing was reparations.

The White House’s appetite for these “reparations” proved short lived. In 1970, Nixon took The Philadelphia Plan national, expanding beyond the trades. In 1972, he ran against his own plan. Fletchers was forced out. The Democrats were tarred as the “quota party.” “The zip went out of that integration effort,” said then aide William Safire, “after the hard hats marched in support of Nixon on the war.” So much for “reparations.”

With any program of reparations, likewise, other claimants will come forward. If African Americans are due payment for slavery and subjugation, what about Native Americans, who lost a whole continent? What about Mexican-Americans, who were deprived by the Mexican-American war of the right to migrate into half their former country? Japanese Americans, interned during World War II? Chinese Americans, the victims of coolie labor and the Oriental Exclusion Acts? Members of these groups may concede that they were not maltreated in the same way as African Americans—and may not be entitled to exactly the same consideration. But if black Americans are entitled to almost a trillion dollars in compensation (Coates suggests a figure of $34 billion a year “for a decade or two”) surely these other maltreated groups must be entitled at least to something?

People who take up reparations arguments should especially know it because it presents us with some provocative questions.  The collective ills of housing segregation—block-busting, redlining, segregated public-housing, the G.I. Bill, terrorism—continued long after Japanese-American internment. A serious interlocutor of reparations can not thoughtlessly muster a melange of historical wrongs, but must directly explain why the Japanese-American case is compelling, but the more recent African-American case is not.

Slippery slopes will not do. The “If we give them one, they’ll all have one” argument is demonstrably false. This is as it should be. The argument for black reparations is not simply “Hey guys, we did it for the Japanese-Americans so it must be right.” A claim must stand on its arguments. Nothing would please me more than to read a 15,000 word “Case for Native American Reparations.” I say this because we can’t evaluate particular claims without understanding particular history. David, like many who believe reparations to be “impossible,” is anxious to skip the history and leap to implementation. But the questions, themselves, prove that we are not prepared.

“Does a mixed-raced person qualify?” David asks. Probably so, given that there are very few “pure raced” black people who were injured by racism. Indeed, the lack of “purity” is parcel to the injury. Perhaps David wants to ask “Do black people with direct ‘white’ ancestry qualify?” The correct reply to this is “Were black people with direct ‘white’ ancestry victims of racist housing policy?” The answer to that question is knowable. But it is not the question we ask. Instead we focus on the myth of “race,” while ignoring the demonstrable fact of injury.

This species of ignorance—of looking away—is old. In 1884, Harvard scientist Nathaniel Shaler assessed “The Negro Problem” in the pages of this very magazine. Shaler concluded that:

It was their presence here that was the evil, and for this none of the men of our century are responsible … The burden lies on the souls of our dull, greedy ancestors of the seventeenth and eighteenth centuries, who were too stupid to see or too careless to consider anything but immediate gain …

There can be no sort of doubt, that, judged by the light of all experience, these people are a danger to America greater and more insuperable than any of those that menace the other great civilized states of the world. The armies of the Old World, the inheritance of medievalism  in its governments, the chance evils of Ireland and Sicily, are all light burdens when compared with this load of African negro blood that an evil past has imposed upon us.

At the very moment that Shaler was disowning American responsibility for enslavement, there were thousands, perhaps millions, of freedmen alive as well as their enslavers. It had barely been 20 years since enslavement was abolished. It had not been ten years since the rout of Reconstruction. In that time, sensible claims for reparations were being made. The black activist Callie House argued that pensions should be paid to freedmen and freedwomen for unpaid toil. The movement garnered Congressional support. But it failed, largely because, the country believed as Shaler did, that “none of the men of this century” were “responsible.”

A similar moment finds us now. Even if one feels that slavery was too far into the deep past (and I do not, because I view this as a continuum) the immediate past is with us. Identifying the victims of racist housing policy in this country is not hard. Again, we have the maps. We have census. We could set up a claims system for black veterans who were frustrated in their attempt to use the G.I. Bill. We could then decide what remedy we might offer these people and their communities. And there is nothing “impractical” about this.

The problem of reparations has never been practicality. It has always been the awesome ghosts of history. A fear of ghosts has sometimes occupied the pages of the magazine for which David and I now writes. In other times banishment has been our priority. The mature citizen, the hard student, is now called to choose between finding a reason to confront the past, or finding more reasons to hide from it. David thinks HR-40 commits us to a solution. He is correct. The solution is to study. I submit his own article as proof of why such study is so deeply needed.

* The following books were essential to this piece:

Is The Destructive Drug War Being Brought To An End?

Is The Destructive Drug War Being Brought To An End?
We Need Your Support — Donate, Share, Sign-Up Ways to Support