The Trumpification of the Latin American Right

You Are Here: Home » Commentaries/Opinions » The Trumpification of the Latin American Right 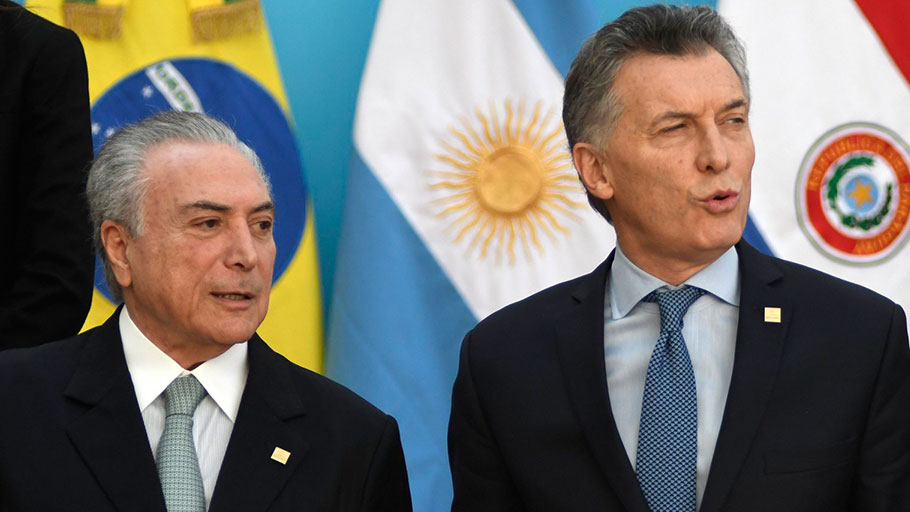 Brazilian president Michel Temer (L) and Argentine President Mauricio Macri arrive to pose for the official picture at the end of the Mercosur Summit in mendoza, 1080 km west of buenos Aires on July 21, 2017. Photo by Andres Larrovere, AFP, Getty Images.

Since Donald Trump became president, much has been said about the “Latin Americanization” of U.S. politics. The Washington Post, remarking on Trump’s nationalist demagoguery, referred to him as “the U.S.’s first Latin American president,” while an essay I wrote in Foreign Affairs shortly after the 2016 election termed Trump “A Caudillo in Washington,” a reference to the prototype of the Latin American strongman.

Decidedly less has been said about the reverse phenomenon: the increasing salience of “Trumpism” in Latin American politics. This is taking place as the right in Latin America is staging a stunning comeback after a long sojourn in the political wilderness. In the last two years alone, right-wing candidates have ascended to the presidency in Brazil, Argentina, and, last month, Chile. For the first time in decades, South America’s three leading economies are in the hands of conservative governments.

To be sure, those leading the right back to power in Latin America stand apart from Trump — they are not impulsive, protectionist, or anti-establishment. But they do share more than a few things with the American president. This includes not just a newfound nativism that borders on xenophobia — expressed, in at least one case, in the desire for a wall at one’s national borders — but also a turn toward evangelicals (rather than Christians more generally) to burnish the social conservative bona fides of their otherwise business-centric backgrounds. These factors are new in Latin American politics.

Like Trump, the recently elected presidents of Argentina and Chile, Mauricio Macri and Sebastián Piñera, are business moguls-turned-politicians who came into office praising the virtues of applying business strategies to the job of governing. This is a stark departure for Latin America, whose right-wing leaders have traditionally been military men on horseback. Macri, the son of business tycoon Francisco Macri, made a fortune in finance, construction, and sports prior to entering politics. Piñera, who previously ruled Chile between 2010 and 2014, is one of the world’s wealthiest politicians. He is worth $2.8 billion, according to Forbes magazine.

Meanwhile, nativist tendencies reminiscent of Trump’s “America First” agenda and its stoking of anti-immigrant sentiments abound in Latin America’s ascendant right. Rio de Janeiro Congressman Jair Bolsonaro, a leading contender for the Brazilian presidency who has gladly accepted the moniker of the Brazilian Trump, has accused Haitian refugees in Brazil of “bringing diseases to the country.” This echoes Trump’s reported claimthat Haitians immigrating to the United States “all have AIDS.” Trump’s charge that Mexico is sending “rapists” and “criminals” into the United States is reflected in the justifications offered by the presidents of Argentina and Chile for curbing immigration. “We cannot continue to allow criminals to keep choosing Argentina as a place to commit offenses,” Macri said at a press conference announcing a 2017 immigration order intended to stop immigrants coming into Argentina from Bolivia, Peru, and Paraguay. During Chile’s 2017 presidential campaign, a recent wave of immigrants from Haiti and Venezuela spurred Piñera to criticize Chilean immigration laws for “importing problems like delinquency, drug trafficking, and organized crime.”

Last February, Argentine legislator Alfredo Olmedo, who hails from the northern province of Salta, which shares a border with Bolivia, made news across Latin America by announcing a proposal for a wall to keep people from poorer Latin American nations from entering Argentina. There was no chance that anyone could miss the overt influence of Trump’s proposal to construct a wall along the U.S.-Mexican border to keep Mexicans from entering the United States on Olmedo’s thinking. Quoted by the Guardian, Olmedo said: “I am 100 percent with Trump. I know that border very well and a wall is the solution. We have to build a wall.” Nor was Trump exempted from the torrent of criticism that Olmedo’s wall proposal received. Bolivian President Evo Morales wrote on Twitter: “We can’t be following the example of the north and its policies, building walls to divide us.”

The Latin American right is also embracing social conservatism more tightly than ever, following the template set by the American Christian right during the 1980s. That’s nowhere more pronounced than in Brazil, with its rapidly growing evangelical population; though Brazil remains the world’s largest Catholic nation, some 30 percent of Brazilians now claim an evangelical identity, up from 10 percent only three decades ago. This movement is now starting to flex its political muscles, with the encouragement of allies on the political right. Evangelical leaders were a formidable force behind the impeachment of Dilma Rousseff, Brazil’s first female president, on corruption charges in 2016, after they grew weary of the social liberalism of Rousseff’s Workers’ Party and its support for abortion, gay rights, and sex education.

Evangelicals are also behind the administration of Michel Temer, Rousseff’s right-wing successor. Like Trump, Temer has sought an alliance with evangelical leaders to blunt the impact of numerous scandals and ethical lapses. Indeed, Temer, a Roman Catholic of Lebanese descent, may well owe his job to the evangelical movement. In 2016, his ascent to the presidency was threatened by a rumor that he was a devil worshiper. Evangelical leaders rushed to Temer’s side to declare in a video message to the nation via social media that Temer was not a Satanist. In exchange for this assistance, Temer named several evangelical leaders to his Cabinet (which was composed exclusively of white men), including a creationist as trade minister (his name was originally floated as head of the ministry of science).

Given Latin America’s right-wing turn’s affinities with Trumpism, it is tempting to see it as part of the global wave of right-wing populism making its way through the United States and Western Europe. Its roots are thought to rest in widespread discontent with globalization, open borders, the “establishment,” and multilateral organizations such the European Union. Among the more notable casualties of this revolt of the masses are Hillary Clinton’s presidential campaign and Britain’s exit from the EU.

But the rise of the right in Latin America is for the most part a homegrown phenomenon. Above all, the right’s rising fortunes are a counter-reaction to the hegemonic dominance of the left in the region’s politics since the end of the Cold War. Indeed, for the better part of the Cold War era, the right all but disappeared from many Latin American countries due to its association with bloodthirsty military dictatorship during the 1970s and 1980s. This was a counter-reaction to the political excesses of the left.

The Workers’ Party, founded by Luiz Inácio Lula da Silva in the twilight of military dictatorship in the late 1970s, controlled Brazil’s main cities and state governments during the 1980s and 1990s, before it had a 13-year run in Brasilia, from 2003 to 2016. The husband and wife team of Néstor Kirchner and Cristina Fernández de Kirchner of the Peronist party ruled Argentina for 13 years (from 2003 to 2015). Carlos Menem, another Peronist, ruled Argentina from 1989 to 1999. Left-wing coalitions and parties have ruled Chile since the dismantling of the Pinochet dictatorship in 1990 — save for 2010 to 2014, when Piñera governed the country — with Socialist Michelle Bachelet elected president twice, in 2006 and late 2013.

Not surprisingly, “left-wing fatigue” is a key explanation behind the demise of the so-called Pink Tide that swept the region beginning in the late 1990s. That fatigue has been intensified by the economic slowdown created by the end of a China-fueled commodities boom. The boom’s end, in 2012, put the left in a jam by making if very difficult to continue to fund the anti-poverty programs that made da Silva, Fernández, and Bachelet so popular. Further complicating things for the left is a mountain of corruption scandals. Earlier this month, da Silva was sent to prison for accepting bribes in exchange for government contracts while in office. This was part of Operation Car Wash, the biggest anti-corruption dragnet in Brazilian history. Fernández has been indicted on fraud charges. Bachelet left office earlier this year with a trail of accusations that her family engaged in shady real estate transactions.

Whatever the case, it seems unlikely that Latin America’s newly elected right-wing governments will veer too far to the right, especially on economic matters. For one thing, the left has already appropriated much of the traditional economic playbook of the right, such as privatizations and austerity measures. Moreover, radical right-wing turns in Latin America are hindered by the continued clout of the left; both Macri and Piñera face strong opposition in Congress by left-wing parties.

Finally, despite the significant progress that the left made in combating poverty within the last decade, rampant inequality continues to define contemporary Latin America. Inequality makes electoral politics in the region structurally difficult for right-wing parties. This explains why Temer and Macri have been slow to dismantle popular anti-poverty programs. Inequality also makes left-wing populism a potent force in Latin American politics. Left-wing populism remains hegemonic in Bolivia, Ecuador, and Venezuela. And it may come to power in Mexico in the next presidential cycle. Clearly, the Latin American left is down but certainly not out.

Omar G. Encarnación is a professor of political studies at Bard College and author of Democracy Without Justice in Spain: The Politics of Forgetting.