The White Nationalists Are Winning

You Are Here: Home » Blog » Commentaries/Opinions » The White Nationalists Are Winning 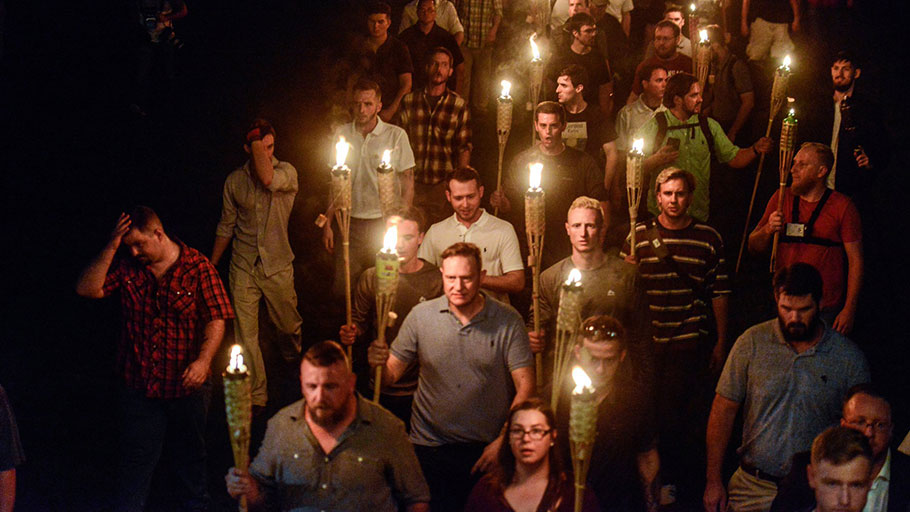 Fox News anchors and high-profile politicians are now openly pushing the racism of the alt-right. The fringe movement’s messages have permeated the mainstream Republican Party.

By Adam Serwer, The Atlantic —

The year since the white-supremacist Unite the Right rally in Charlottesville, Virginia, has been difficult for the rogues gallery of Nazis and pseudo-Nazis who championed it.

Jason Kessler, one of the organizers, was practically run out of town and faces a lawsuit that could force him to name his funders and ideological comrades. Christopher Cantwell, who put on a tough-guy act for Vice cameras but spent a lot of time crying on YouTube after a warrant was issued for his arrest, has turned state’s evidence. The anti-Semitic gadfly Tim “Baked Alaska” Gionet was banned from Twitter and has had difficulty reconstituting his online presence. Richard Spencer, the white-nationalist who lives off his family’s largesse and government subsidies, and is best known for being punched in the face, says his miniature Nuremberg rallies are no longer “fun” because of the leftist militant group Antifa. Matthew Heimbach of the Traditionalist Worker Party was arrested for assaulting his wife and stepfather-in-law after the latter caught Heimbach sleeping with hiswife. Andrew Anglin’s website, The Daily Stormer, has had trouble finding and maintaining a host in the United States and abroad. One by one, several of the white nationalists who participated in the cowardly assault on the black counter-protester DeAndre Harris have pleaded guilty or been convicted.

From the looks of it, the Nazis lost the battle of Charlottesville. After all, Donald Trump’s handling of the aftermath of the rally, in which he said there were “very fine people” on both sides of the protest, drew bipartisan condemnation. The attempted rebranding of white nationalism as the genteel and technologically savvy alt-right failed, the marketing campaign faltering after the murder of the counter-protester Heather Heyer and the attempted murder of several others revealed to the nation the logical conclusion of alt-right beliefs and arguments. The bloody outcome of that day foiled the white nationalists’ attempt to garner sympathy from the mainstream right, and in doing so, make themselves respectable.

But the alt-right and its fellow travelers were never going to be able to assemble a mass movement. Despite the controversy over the rally and its bloody aftermath, the white nationalists’ ideological goals remain a core part of the Trump agenda. As long as that agenda finds a home in one of the two major American political parties, a significant portion of the country will fervently support it. And as an ideological vanguard, the alt-right fulfilled its own purpose in pulling the Republican Party in its direction.

A year after white nationalists in Charlottesville chanted, “You will not replace us!” their message has been taken up and amplified by Fox News personalities. Tucker Carlson tells his audience that “Latin American countries are changing election outcomes here by forcing demographic change on this country.” Laura Ingraham says that “the America that we know and love doesn’t exist anymore” because of “massive demographic changes” as a result of “both illegal and sometimes legal immigration that progressives love.” They echo the white-nationalist claim that America is at risk because the nation is growing more diverse, an argument that treats the mere presence of nonwhite people, citizen or noncitizen, as an existential threat to the country. White nationalists like Cantwell are cheered to hear their beliefs championed on Fox. Cantwell wrote last year that Carlson “is basically telling white America to prepare for war as directly as he can get away with while remaining on Fox News.”

American history is replete with tragedies that are epic in scale, but few are comparable to what has happened to the party of Lincoln, who struck perhaps the most decisive victory against the principle that America is a white man’s country with the proposal and ratification of the Fourteenth Amendment. There is no reason that this new generation of immigrants cannot become loyal Republican voters, much as a previous generation of despised foreign newcomers did. The obstacle is the conservative movement’s growing embrace of a definition of American citizenship that is inherently racial. Where prior conservative champions like George W. Bush or Ronald Reagan might have seen a new generation of Republicans, today many conservatives see only an invasion.

While few sitting Republican legislators echo these sentiments publicly, Republican audiences are now being fed white-nationalist philosophy through mainstream conservative figures with national followings. Unless something changes, conservative constituencies will eventually begin to demand that their representatives adopt those views as well.

White nationalists win by activating white panic, by frightening a sufficient number of white people into believing that their safety and livelihoods can only be protected by defining American citizenship in racial terms, and by convincing them that American politics is a zero-sum game in which white people only win when people of color lose. While this dynamic has always been present in American politics, it has been decades since the White House has been occupied by a president who so visibly delights in exploiting it, aided by a right-wing media infrastructure that has come to see it as a ratings strategy. It is not just the white nationalists who win when racialized fears surrounding crime, immigration, and terrorism shape the political behavior of white voters. Donald Trump also wins. And both the Trump White House and the men who rallied in Charlottesville for the cause of white power know it.

While liberals may have seen the backlash to Trump’s defense of the rally in Charlottesville as heartening, the incident itself seems to have convinced Trump and his allies that they could survive any controversy over the president’s views on race. Former Trump aides told Politico’s Annie Karni that “the takeaway from Charlottesville is the nihilistic notion that nothing matters except for how things play.” That helps explain why, about a month later, Trump began attacking black athletes for protesting police brutality. After an initial show of defiance, the NFL ultimately forced players to cease their protests or pay fines, allowing the head of state to dictate when Americans are allowed to protest violations of their rights by agents of that state—violations Trump himself has vocally encouraged. As long as the president believes racist demagoguery plays to his advantage, he will not retreat from it, and neither will his most loyal acolytes.

Horror at Charlottesville did not temper the president’s enthusiasm for demonizing religious and ethnic minorities that characterized his 2016 campaign, and has not dampened his administration’s efforts to turn those convictions into policy. The Trump administration has revoked immigration status for hundreds of thousands of black and Latino immigrants; it has turned a blind eye to police abuses of people of color and civil-rights enforcement; it successfully defended its travel ban targeting Muslims before the Supreme Court; it has adopted a border policy that prioritizes the jailing of children over the prosecution of criminals; it abandoned Puerto Rico in the aftermath of Hurricane Maria; it has distorted the census in an effort to dilute the political power of minority voters; and it is now seeking to make it harder for legal immigrants to become American citizens. Emboldened by Trump’s success, a handful of candidates on the Republican ticket are either embracing white-nationalist figures or are white nationalists themselves.

Perhaps Trump would have pursued the same agenda, with the same abandon, had Charlottesville never occurred. Yet the incident and its aftermath ratified his calculation that his base would fervently defend any expression of bigotry against people of color. Trump’s base is not outraged by his mistreatment of religious and ethnic minorities, but by the suggestion that such mistreatment is motivated by prejudice.

So yes, many of the white nationalists associated with the rally in Charlottesville have since suffered disgrace, ridicule, or legal consequences. But their ideological quest to secure white political and cultural hegemony over the United States continues to be championed by the president himself. There’s a reason they’re still wearing their maga hats.

The president remains historically unpopular, and may be politically vulnerable. But there is nothing Trump could say or do to communities of color that would alienate much of white America. From the moment he descended the escalator at Trump Tower calling Mexicans rapists and drug dealers, there has been little sign that the Republican voters he depends on for support find such bigotry disqualifying.

Only when Americans render a political verdict against Trumpism and its racialized vision of American citizenship will that skirmish be won. Until that happens, the white nationalists know that despite their infamy and humiliation, their pathetic adherence to a genetic determinism they desperately hope will rescue their lonely lives from insignificance is slowly succeeding at remaking the country in their image.