They Didn’t Kneel For This

You Are Here: Home » Blog » Commentaries/Opinions » They Didn’t Kneel For This 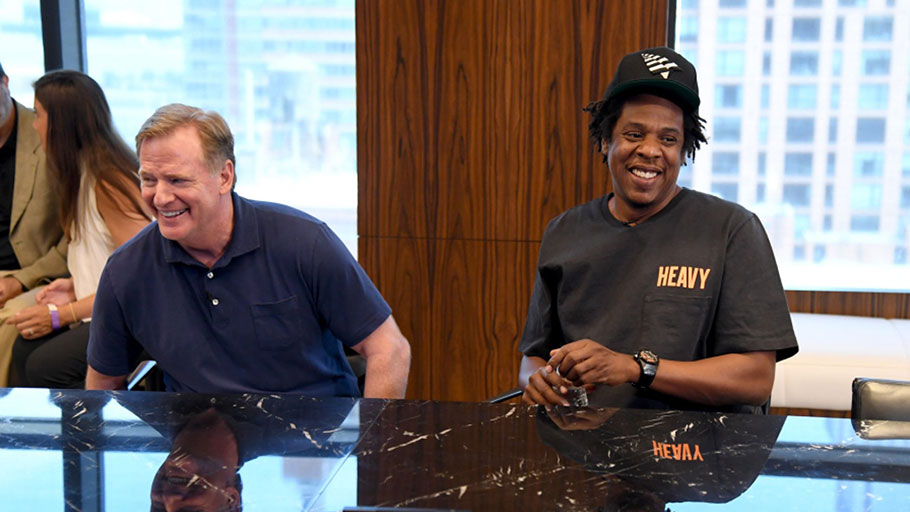 The NFL is Colin Kaepernick’s antagonist. Expecting billionaire team owners to be serious about social justice, with or without Jay-Z, is a mistake.

“Inspire Change” could be something you say if you are trying to make people aware of a particular problem. But with regards to the National Football League and racial injustice, that job is already done. Colin Kaepernick, along with his fellow football players and other athletes from other sports, handled that job starting three years ago this past August, when they began kneeling in protest as the national anthem rang out before their games.

So when the NFL tells us, starting this week, that it is trying to “Inspire Change,” it is clear that two things, primarily, interest NFL Commissioner Roger Goodell and the billionaire owners of the league’s 32 teams — along with Shawn Carter, the artist known as Jay-Z, soon to be a majority team owner himself. Under the guise of philanthropic activism, they are taking credit for Kaepernick’s message — even as they paid him a monetary settlement for continuing to deny him employment because he chose to express it. Even worse, they are flaunting it, showing how unserious they are about embracing his cause.

Last Friday, the league revealed the first fruits of its partnership with Carter and Roc Nation, the rapper’s entertainment company. As anyone with common sense could have expected, those fruits are rancid with commercialism and commodification. When the NFL opens its 100th season, and third straight without Kaepernick, on Thursday night with its annual concert event, the performers won’t just be headliners. Meek Mill, Rapsody, and Meghan Trainor are now “Inspire Change Advocates.”

That isn’t all. While “Songs of the Season” sounds like a Christmas compilation album that you buy off a toll-free line, it’s actually the name that the league chose for a supposedly serious part of its “social enterprise model,” perhaps labeled so because corporations consider words like “racial justice” to be radioactive.

No, instead, they dispatch musicians to create music that the NFL will integrate into promotions, all branded with the feel-good “social justice” message. They’ll also sell “Inspire Change” apparel later this season. (Though the league didn’t say as much last Friday, past experience tells us that these products will end up as mandated sideline gear for players and coaches before too long. What better billboards do you get than the NFL star who scores a touchdown and slaps on an “Inspire Change” cap?)

Proceeds will go to organizations “committed to the key priorities of Inspire Change,” those being “education and economic empowerment, police and community relations, and criminal justice reform.” But the real profit comes from placating white feelings at the expense of black speech and protest.

Music singles, concerts, and clothing. People can engage in all the willful ignorance they like and pretend that they don’t know what Kaepernick’s protest was all about, but I think the average bear could discern that neither he nor his fellow players tried to sell anything while demonstrating.

(That came later, when Kaepernick became a prominent Nike pitchman and the brand once accused of sweatshop abuses put a swoosh next to his face and all of a sudden became conscious.)

People have intellectually honest criticisms of Kaepernick. Even I do, specifically concerning his selfish, wrongheaded declaration in 2016 that he wouldn’t vote. But the fact is that the NFL has not only silenced his antiracist message on the sidelines while denying him employment, but the league has now converted it into something that it can sell. Even better for its owners, they have managed not to suffer many meaningful repercussions from its teams shutting Kaepernick out, often for inferior personnel. In several cases this season alone, teams chose to have poorer quarterback situations by keeping Kaepernick out. Perhaps they either view it too risky a public-relations move to even give him a shot in training camp, or it’s because they don’t want to associate themselves with his ideals. Either way, though the league could still have made him a part of its philanthropic efforts while he was not on a roster, it chose not to do so.

Instead, the NFL presented Carter as validation, as the apotheosis of its wokeness. The league — for which I worked as a Films producer for six years — is most interested in “protecting the shield,” a metaphor for both its logo and its reputation. And it offered up one of the most famous and celebrated black entertainers as a buffer. For a few weeks, it worked. Carter was a cookie for the disbelieving black public to entertain, for a short while, the possibility that it actually gave a damn about racial injustice. The league won either way, whether those black skeptics bought it and muted their criticism of the NFL, or they didn’t and soon focused their ire on Carter.

The swindling of Kaepernick’s protest is all but complete. Since the league once used pink accents on its uniforms to spotlight breast cancer research, the only thing that may be missing from this Susan G. Komen-ing of the fight for racial justice are the black ribbons on its uniforms.

Despite his past activism, Carter’s involvement shouldn’t shock anyone. Back in January, he pinned some of the epidemic of police violence of single-family homes instilling an “adverse feeling toward authority” in the black people who grow up in them. And aside from his politics, Carter is one of these masters of the NFL universe now, and it is a club that he sought to join despite what has been done to Kaepernick. He is an extraordinarily wealthy man, like the team owners, and odds are that he’ll side with them when the chips come down.

It was foolish for any of us to expect otherwise. While corporations are awful at pressing for positive systemic change, they tend to be great at public relations. And the best way they saw to end the Kaepernick mess was to pay up. In 2017, the league committed $89 million over six years to various social-justice causes. Signifying virtue while not angering the overwhelmingly white fan base that buys tickets at stadiums on Sundays was probably at the forefront of their minds, not ending systemic racism with the kind of cultural and financial cachet that the league possesses. The priority is always making money while maintaining a profile clean enough to make that business sustainable.

That is why Carter and the NFL didn’t feel that they could make a partnership official without putting a hasty civil-rights paint job on it. But like so many of us, Kaepernick himself saw what was lying beneath. In a tweet sent Friday afternoon, not long after the “Inspire Change” news broke, the quarterback and activist cited a passage from Robert L. Allen’s 1969 Black Power text, Black Awakening in Capitalist America. It critiqued how people in Carter’s position in the past welded “black communities more firmly into the structure of American corporate capitalism.” The passage charges with malfeasance both the system and the black messengers who, as Kaepernick would argue, make things worse in the end for our people.

“What [they] seek is not an end to oppression, but the transfer of the oppressive apparatus into their own hands. “

That thesis becomes especially apparent when we consider that anywhere from 70% to 80% of the NFL’s labor is made up of black men, many from areas that would benefit the most from advancing racial justice. It makes good financial sense to throw a little bit to the communities that feed the league its talent. But how much? Would it really help the NFL’s bottom line if a player who thinks football is his only way out actually gets a quality education? If wage equality became real and perhaps his family didn’t need to rely upon his NCAA scholarship? If the reality of concussion damage, combined with an increase in options for these young men, meant that fewer of them chose to play the sport, how would the NFL thrive, if not survive?

I don’t actually believe that we’ll ever kill football in the United States, and have made that argument in the past. But the NFL is simply reminding us that they are in the business of entertainment. So is Carter. Thus, we should expect either he or the NFL to display a vested interest in the status quo. After all, this is the America where they were able to become billionaires.

If this “Inspire Change” campaign ends up sending difference-making money to organizations that need it, that is better than it not happening at all. But who, precisely, are they asking to change? Are they directing this message at police departments under consent decree for brutality and abuse? How about the president? Sending him a t-shirt?

Next time, the NFL should just spare us all this charade and invite a black celebrity to buy into a team without worrying about placating African American fans. The people who Kaepernick was trying to target with his message either don’t need one of the NFL’s marketing gimmicks to validate their cause or aren’t receptive to it in the first place. Either way, the folks who needed that inspiration to make change heard Kaepernick a long time ago.