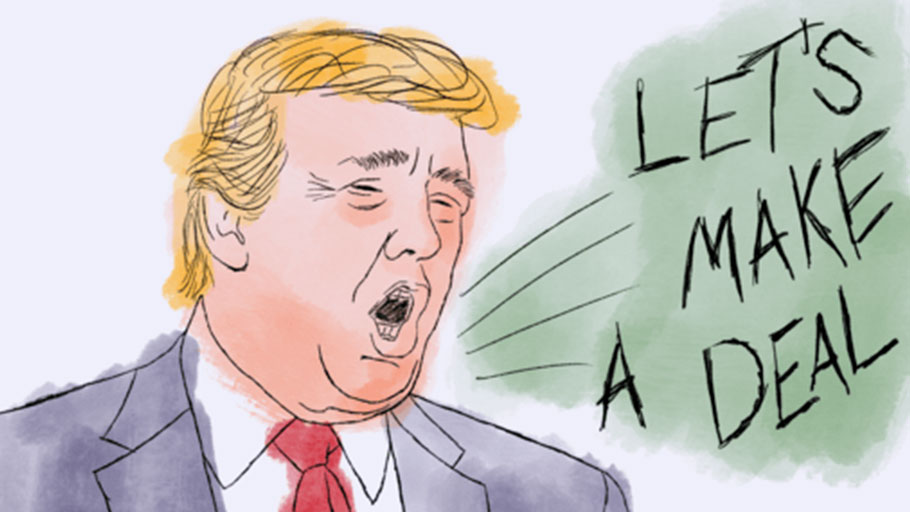 President Donald Trump’s fit over China speaks to the rise of neofascism in American politics, at a time when neither Congress nor the courts are showing any interest in rolling back presidential power. Trump’s unique brand of neofascism first emerged in the form of his attempt to crack down on journalistic critics for “treason,” and via the onset of his white ethno-nationalist, which he declared via a “state of emergency” that allowed him to criminalize immigrants in “concentration camp”-style detainment settings, and to confiscate taxpayer funds to build a wall with Mexico that was never authorized by Congress. This nascent fascism is quickly morphing into full-blown fascism, via Trump’s efforts to dictate the rules of investment to U.S. corporations, and in relation to his emerging trade war with China.

In late August, Trump announced he would intensify the trade war against China, with the imposition of an additional 5 percent duty on $250 billion in Chinese goods, reaching a 30 percent tax by October 1st, coupled with a 15 percent tax – over his previous 10 percent planned rate – on another $300 billion of imports, to take effect on September 1st. The major controversy is not Trump’s saber-rattling with China, but his attempt to unilaterally require that American corporations no longer do business in China. As Trump announced on Twitter, “Our great American companies are hereby ordered to immediately start looking for an alternative to China, including bringing our companies HOME and making your products in the USA.” This “order” was political in motivation, in line with Trump’s “America First” agenda, and as reflected in his announcement that “We don’t need China and, frankly, would be far better off without them.”

For those who would defend the neofascist in chief for making merely “tongue and cheek” comments by “ordering” U.S. corporations around, the president was having none of it. He elaborated via Twitter that his mandate to American corporations was permissible under the International Emergency Economic Powers Act of 1977, a law the New York Times reports “has been used mainly to target terrorists” and “drug traffickers,” and “originally meant to enable a president to isolate criminal regimes, not sever economic ties with a major trading partner over a tariff dispute.” In a sign of just how much further Trump has come from the authoritarian politics of the Bush-“war on terror” years, George W. Bush’s former international economic advisor warned that “Any invocation of the International Emergency Economic Powers Act in these circumstances and for these purposes would be an abuse…The act is intended to address extraordinary national security threats and true national emergencies not fits of presidential pique.” But Trump was not deterred. In relation to his “emergency” powers, he claimed: “For all the Fake News Reporters that don’t have a clue as to what the law is relative to Presidential powers, China, etc, try looking at the Emergency Economic Powers Act of 1977. Case closed!”

It should be no surprise that Trump sees this as a “case closed” issue of presidential authority, considering his longstanding contempt for the rule of law, and his routine dismissal of the courts and Congress, both of which he has shown little interest in consulting with regard to his presidential acts and orders. This president believes in ruling by decree, and he isn’t going to let inconvenient obstacles like Constitutionalism and judicial or Congressional oversight get in his way.

A closer look at the 1977 law that Trump cites reveals that it does, in fact, grant presidents the power to regulate foreign commerce in times of emergency. But the law is not what the president claims it to be. It allows the executive to “prohibit” the “importation or exportation” of goods and “any transactions in foreign exchange” “in which any foreign country or national thereof has any interest,” during periods of “unusual and extraordinary threat,” as related to national security and the economy. The key point of emphasis here is that this power exists during periods of “unusual and extraordinary threat,” which would not under any rational interpretation include simple trade disputes between competing heads of state. Nor would it include trade disputes occurring under an economy which Trump himself heralded last week as “strong and good,” and commented within the last month that it is the “best it has ever been.”

Trump would have his cake and eat it too, speaking out of both sides of his mouth by declaring a national economic emergency on the one hand, while celebrating the nation’s economic vitality and growth on the other. But make no mistake: he realizes there is a very real danger of an emerging recession as a result of his escalating trade war with China. The problem is that he is too arrogant and vain to ever admit that rising economic instability is a result of his own actions, and to reverse course to avoid a possible recession.

In his growing desperation and in response to a self-imposed “crisis,” Trump has taken to demonizing domestic political figures. Consider, for example, hisattack the head of the Federal Reserve, Jay Powell, after he refused to immediately lower interest rates to pull the economy back from further volatility, following numerous hits to the stock market due to the onset of Trump’s trade war. Trump hyper-ventilated on Twitter, asking: “who is our bigger enemy, Jay Powell or Chairman Xi?” following Powell’s announcement that the Federal Reserve was limited in its powers to stimulate the economy due to the uncertainty and volatility imposed by Trump’s trade war.

The risk of a declining economy to Trump’s political future shouldn’t be dismissed. A president with a 40 percent approval rating cannot afford to lose much by way of public support if he hopes to be re-elected in 2020. And a full-blown economic recession will almost certainly mean a significant decline in Trump’s already tenuous job approval, likely putting him out of reach of a second term if economic conditions continue to deteriorate in late 2019 and 2020. Despite Trump’s bloviating about enemies at home and abroad, the ultimate irony in this case is that he is his own worst enemy, and an emerging recession, if it does come, will be of his own making.

Recent political events do suggest that the United States is entering a state of emergency, although it is not one that’s driven by an economic downturn. Rather, the cancer that afflicts the nation is neofascism. By neofascism, I am referring specifically to a system of politics that is marked by extreme nationalism, racism and xenophobia, authoritarian contempt for the rule of law, and most recently, to active government efforts to impose new “rules of the game” on the capitalist economy, contrary to “free market” neoliberal principles. This final aspect of fascism – call it corporatist fascism, was popularized in Nazi Germany under the Third Reich, and places government at the helm in terms of making major investment decisions for private corporations.

U.S. capitalism has long been marked by an authoritarian organizational structure, via corporate hierarchies that exercise power at the expense of working Americans having a say in the workplace, while deterring unionism and democracy in the workplace. But corporatist neofascism, of the variety that Trump seeks to introduce, goes beyond anything we have seen in modern history. Government has historically been the junior partner in reinforcing the plutocratic power of the business class over politics. It is not, under “free market” capitalism, a legitimate guiding force when it comes to dictating the terms of investment to business and the private sector.

Most Americans are reluctant to apply the term “fascism” to Trump’s politics because of longstanding aversion to the notion that the U.S. could ever become a fascist nation. The “It Can’t Happen Here” ethos was well understood more than 80 years ago by novelist Sinclair Lewis, meaning that Americans have historically been blind to the neofascistic elements of politics unfolding before their very eyes. But ultimately, the “fascism-not-fascism” dichotomy is extremely problematic, dangerous, and self-defeating for those who still value principles of democracy and limited government. If Americans wait to discuss the “is it fascism?” question until after a neofascist state has been fully institutionalized, that debate will be merely academic, and utterly meaningless. The time to discuss a fascist threat is as it is emerging, not after it has been implemented.

Time is growing short for those who would reel in Trump’s runaway neofascistic policies, and in terms of re-establishing the rule of law. Congress has it within its authority to countermand Trump’s efforts to impose corporatist-neofascism on the U.S. economy. The very emergency law that Trump cites states that “the president, in every possible instance, shall consult with the Congress before exercising any of the authorities granted” in the emergency law, and that he must “consult regularly with the Congress so long as such authorities are exercised.” He must provide regular updates to the legislative branch on how such emergency powers are being used. Which means that Congress is at liberty to reverse the “state of emergency” Trump has declared by determining that he has abused his political powers by pursuing an authoritarian, self-aggrandizing policy that grants the president unprecedented authority to impose a corporatist-neofascist regime.

Congress should immediately begin impeachment proceedings, under the grounds that Trump is unfit to be commander in chief, following his recent claim that he is God’s “chosen one” with regard to dictating trade policy, and his efforts to claim dictatorial emergency powers in relation to managing his trade war with China. Since, Trump’s neofascist politics have received little pushback thus far, there is growing concern that his recent trade actions will only further empower the president moving forward. There is little standing in this president’s way, short of legislative or judicial action, as he seeks to destroy what remains of the “checks and balances” system under the U.S. Constitution. Short of impeachment or a national strike and mass protests across the country, Trump’s neofascist politics are likely to intensify in the future.

Anthony DiMaggio is an Assistant Professor of Political Science at Lehigh University. He holds a PhD in political communication, and is the author of the newly released: The Politics of Persuasion: Economic Policy and Media Bias in the Modern Era (Paperback, 2018), and Selling War, Selling Hope: Presidential Rhetoric, the News Media, and U.S. Foreign Policy After 9/11 (Paperback: 2016). He can be reached at: anthonydimaggio612@gmail.com