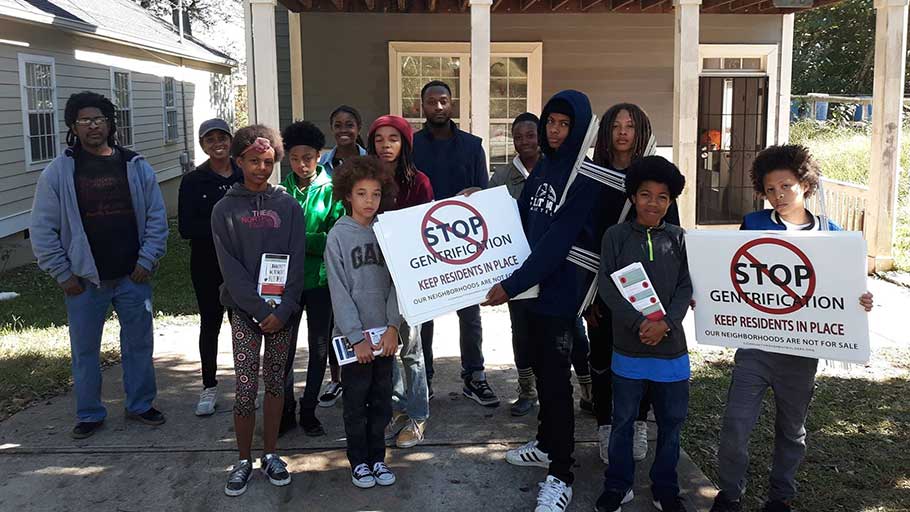 Gentrification has emerged as a major threat to Black communities that have been centers for Black business/economic development, cultural and civic life for generations. Gentrification has become the watch-word for the displacement of Black people and culture. Gentrification is the “Negro Removal Program” of the 21st Century. There is an urgent need for people of African descent to mount a serious offensive to defend Black communities from this insidious onslaught.

During the Civil Rights, Black Power era, the term “Negro Removal” was virtually synonymous with “Urban Renewal,” local, state and federal highway and development projects that often disconnected and destroyed stable Black communities. It was not unusual for a local highway project designed to benefit residents from the suburbs or a component of an Interstate Highway system to be routed through the center of a Black community, uprooting and displacing Black people or permanently weakening businesses, institutions, networks and relationships that bound folks together.  As advocates for Black entrepreneurship correctly urge Black people to create and support Black business districts in our communities, it is useful to remember that Urban Renewal destroyed thriving business districts in Black communities across the country in the latter part of the 20th Century. In fact, there is a historical pattern of marginalizing, subverting or outright destroying Black communities to thwart our ability to achieve full political and economic empowerment and equity in this nation. Gentrification is the latest manifestation of this pattern. 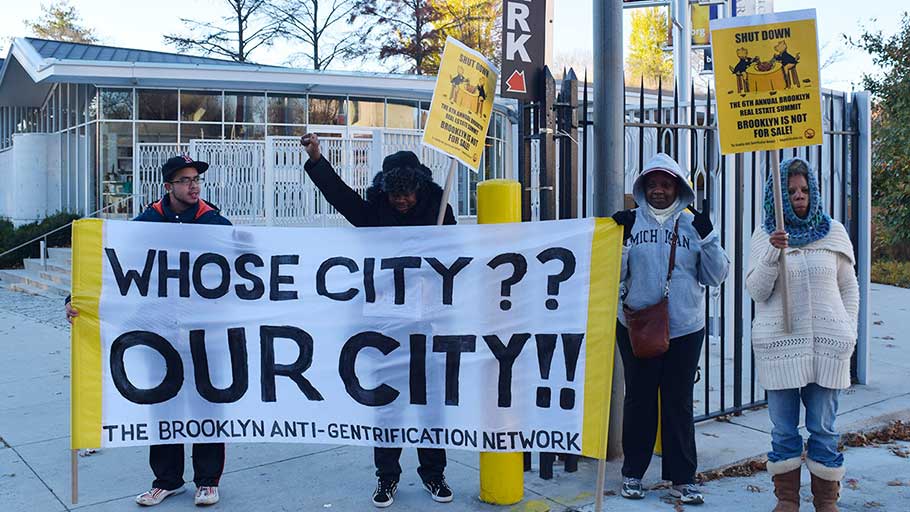 Protesters at the vehicular entrance to the Brooklyn Museum during the 2015 Brooklyn Real Estate Summit. Photo credit: Benjamin Sutton, Hyperallergic

There are a multiplicity of testimonies about this destructive phenomena. The caption of a feature article in the May 2, 2018 edition of the New York Times captured the essence of the crisis confronting Black communities across the country:

“When Home No Longer Looks the Same: Rapid Change in Durham Has Left Many Black Residents Feeling Unwelcome.”

The article details how the revitalization of Durham, N.C. has increasingly meant development/progress for middle and upper-income Whites, but displacement for large numbers of Black working-class and middle-class people who can no longer afford to live in certain sections of the city.  An article in the October 21, 2018 Edition of the Houston Chronicle is also illustrative of the growing concern about gentrification in Black America:

“Historic black neighborhoods disappear all the time. But they don’t have to.”

In Atlanta, the “Black Mecca” of the South, Vine City, the neighborhood where Dr. Martin Luther King, Jr.  and civil rights and political leader Julian Bond lived, no longer exists. It was wiped-out by sports stadium projects. Public housing development after public housing development has been felled by an advancing wave of “progress.” The “Sweet Auburn” District, which was once the home of major Black businesses, is now stagnant. In the face of this onslaught, a youthful group of community advocates called the Community Movement Builders have recently launched an Anti-Gentrification Campaign to mobilize community residents and their allies to address the massive displacement of Black working class and poor people from their neighborhoods. One of their slogans is: “Stop Gentrification: Keep Residents in Place.”

“Development” in Washington, D.C., the original “Chocolate City,” has displaced thousands of Black people, forcing them to move to surrounding suburban areas; the prosperous central city neighborhood and Black business district in Seattle, Washington has vanished as Blacks have been forced to flee to Tacoma and other outlying cities where housing is more affordable;  in Los Angeles, the Crenshaw Subway Coalition is vigorously resisting a subway extension that would spur gentrification in one of the most storied communities in Black America; in neighborhood after neighborhood in New York City, from Brooklyn, Queens, the Bronx to Harlem, gentrification is rapidly displacing hundreds of thousands of Black people. In a few years, Harlem, the cultural-political Capital of Black America, will hardly be recognizable. A Whole Foods Store now stands were Malcolm X once held his legendary rallies! 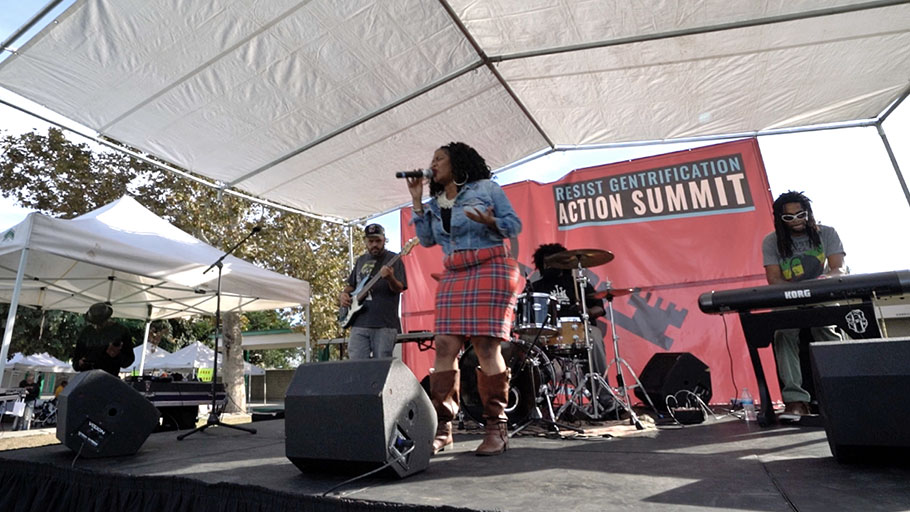 Chocolate Cities, once the domain of Black political and economic power are vanishing as increasing numbers of Whites who in previous generations abandoned urban centers for the suburbs are now returning to establish more comfortable and convenient spaces in closer proximity to their work places.  “Development” to accommodate the newcomers is driving up the cost of housing, especially rental properties in a manner that is unaffordable for large numbers of Black residents. Property taxes are also skyrocketing, putting enormous pressure on Black homeowners as well. As Blacks are displaced and replaced by newcomers, this is inevitably leading to dramatic shifts in political power from neighborhood advisory boards, to city councils and the office of Mayors.  Black power is diminishing.

What is equally egregious are the attitudes of some of the newcomers whom residents of Black communities sometimes characterize as “invaders” or “neo-colonialists.” This is because some newcomers are not content to become a part of the community; they arrogantly attempt to change the rhythms, culture and character of the community.  For decades it has been a well-established and accepted custom that scores of drummers gather on a designated date at a regular time in Marcus Garvey Park in Harlem to play African music. But, once a large number of “invaders” became occupants of a nearby apartment building, they began to complain to the police and petitioned local elected officials, seeking to ban this longstanding weekly ritual.  In Detroit, three White women, who are newcomers to a predominately Black neighborhood, falsely accused a Black man of being a pedophile and demanded that the police file charges against him. The brother in question was starting a community garden on a vacant lot int the neighborhood and the women protested this activity taking place in “their neighborhood.” Fortunately, the Judge dismissed the charges in a case of “gardening while Black!” Reports of these kinds of attitudes and behavior across the country is breeding resentment and hostility towards the “invaders.”

Let me be clear, as a civil right, any person in the United States has the freedom to live wherever they choose. People of African descent have waged a relentless struggle to achieve this precious right. People also have the right to live amongst their own nationality, ethnicity of ethnic group if they choose, hence there are Irish, Italian, Polish, German and Jewish communities in this country. And, occasionally these communities change in composition. “Little Italy” in lower Manhattan in New York is now mostly shops and stores as people of Italian descent have largely chosen to migrant to other neighborhoods. Voluntary migration is one thing, forced displacement is another matter. Time and time again, Black people have faced schemes, targeted policies and outright violence, e.g., Tulsa, Rosewood, to force their removal from neighborhoods and communities they worked and invested in to “develop” as their home.

Black people believe in “development” and no reasonable person would be opposed to improvements or progress that would better their community.  The crucial issue for people of African descent is not development, it is “development” that is displacing Black people and culture.  Therefore, the order and challenge of the day is to achieve “development without displacement.”  The question is, can development strategies be devised that prioritize improving the lives of the current residents and preserving the culture and character of their communities? The answer to that question is yes. The collective brainpower, skill, experience and will exists within Black America to mount an offensive to defend Black communities against gentrification, the “Negro Removal” program of the 21st Century. Therefore, we must gather our brightest and best, the conscious and committed in our brain trust to devise plans and a policy agenda to rescue, preserve Black communities. We possess the collective genius to develop just, safe, viable, vibrant and sustainable Black communities.

To that end, the Institute of the Black World 21st Century (IBW) is issuing an urgent call for a National Emergency Summit on Gentrification to be convened in Newark, NJ, April 4-6, 2019 in conjunction with the annual commemoration of the martyrdom of our beloved Dr. Martin Luther King, Jr.  Newark has been selected because the City’s ambitious development plans incorporate community-based strategies designed to mitigate gentrification. IBW has requested that Ras J. Baraka, the Mayor of Newark, host the Emergency Summit. This gathering is viewed as an extension of the milestone Urban Marshal Plan and Black Economic Development Symposium convened by IBW in Newark in April of this year. We envision anti-gentrification advocates, community economic development practitioners, Mayors, urban planners, faith, civil rights, labor, business and professional leaders attending the Emergency Summit on Gentrification.  The Urban Strategies Program of Faith In Action, National Urban League, Democracy Collaborative and Freedom Caucus of the Center for Community Change have already signaled a willingness to partner with IBW on this crucial undertaking.