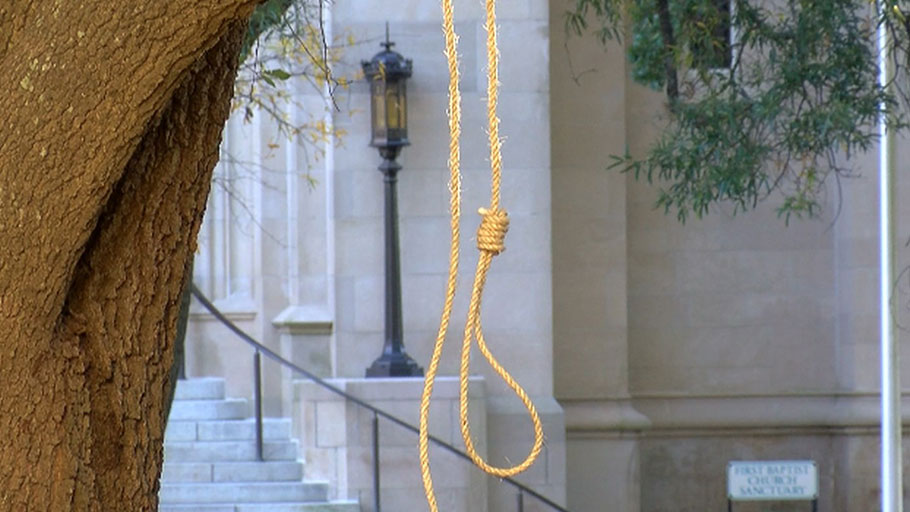 Seven nooses and several signs were found at the Mississippi State Capitol Monday, prompting more nationwide attention and outrage ahead of Tuesday’s election.

Early Monday morning, two nooses were found at the Capitol. According to the Associated Press, five more have been found since. The nooses and signs, referring to the state’s history of lynchings, were found one day before the U.S. Senate runoff between Republican Cindy Hyde-Smith and Democrat Mike Espy.

Hyde-Smith has drawn criticism after a comment she made on the campaign trail referring to “public hanging”.

State Capitol police took the nooses and signs down and are investigating.

“The perpetrators of this act will be identified and prosecuted to the fullest extent of the law. I have contacted the Department of Public Safety and the Federal Bureau of Investigation for assistance.” — Governor Phil Bryant

U.S. Attorney Mike Hurst issued the following statement in response to nooses and hate signs found this morning outside the Mississippi State Capitol:

“With our law enforcement partners, we are actively looking into these acts of hate and intimidation. Let me be perfectly clear – there is absolutely no place in our state for these unacceptable symbols or tactics to intimidate others. If we find evidence beyond a reasonable doubt that a federal crime has occurred, these criminals will be swiftly prosecuted and held accountable. Let us all respond to these despicable acts by voting, working, raising our families, practicing our faith, and pursuing the American dream here in our great state without fear or trepidation and in harmony with our fellow citizens.” — U.S. Attorney Mike Hurst

“I have asked Capitol Police and the Department of Public Safety to fully investigate this reprehensible act and will support the resources necessary to find those responsible,” — Lt. Governor Tate Reeves

The Mississippi State Conference NAACP responded to the discovery saying:

“While much of the information about the incident is still unknown, we firmly believe the current climate of racial and cultural insensitivity has contributed to a decline in civil discourse.

We recognize this moment as further evidence of the need to actively engage in the political process and hold our elected officials accountable for their rhetoric and voting records. We will continue to defend the civil and human rights of everyone in Mississippi and will work diligently to defeat hate wherever or however it materializes.

We are mindful of the vicious cycle of intimidation and divisiveness that has created the current political climate that at best disenfranchises minority voters and at worst is a threat to their wellbeing. We will continue to encourage and support efforts to ensure all Mississippians can participate in the political process and become more civically engaged.”

We will continue to update this developing story — WLBT Jackson, MS 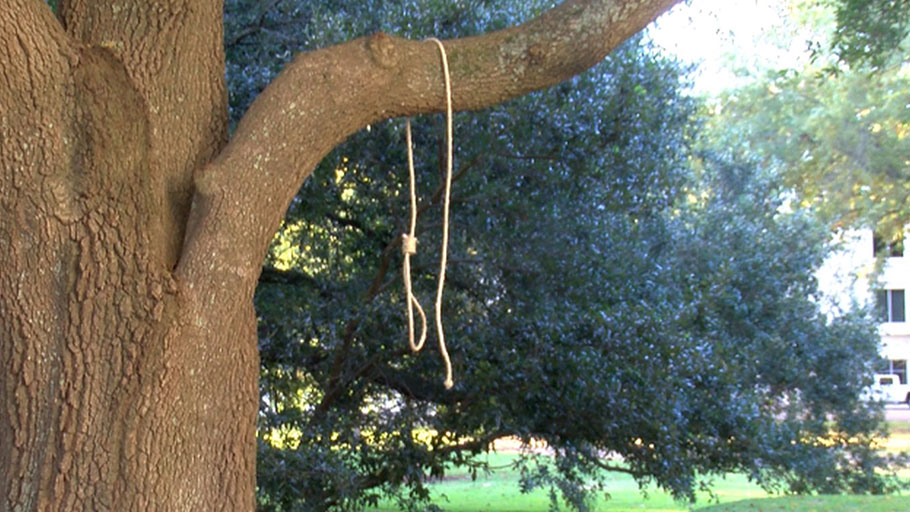 “We’re hanging nooses to remind people that times haven’t changed,” read one of the signs found with the nooses.

Nooses were found hanging outside the Mississippi State Capitol on Monday, along with signs that referenced the racially charged Senate runoff race on Tuesday.

“On Tuesday Nov. 27, thousands of Mississippians will vote for a senator. We need someone who respects the lives of lynch victims,” one sign said, according to a Capitol Police spokesman who read it to NBC News.

The five signs were handwritten on poster board and affixed to the trees on the eve of the runoff Senate election on Tuesday between Democrat Mike Espy, who is black, and Republican Sen. Cindy Hyde-Smith, who has come under fire for her comment about attending a “public hanging” and voter suppression, which her campaign later said was a joke.

Police posted images of the signs on Facebook on Monday afternoon, seeking tips from the community.

One sign recalls the 1955 murder of 14-year-old Emmett Till, who was lynched for allegedly whistling at a white woman, while another says “Willie Jones Jr. lynched for a relationship.”

Jones, a black man, was found hanging from a tree earlier this year outside his white girlfriend’s home in Forest, Mississippi. Local authorities ruled the hanging a suicide, but his family recently teamed up with a local NAACP chapter to call for further investigation. 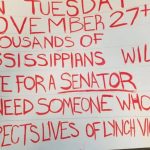 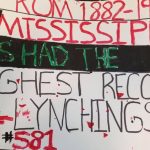 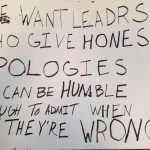 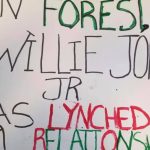 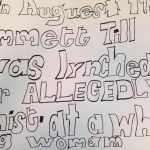 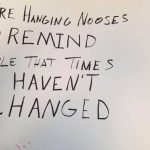 State police were first alerted to the nooses and signs by NBC affiliate WLBT, which received a tip to check out the area, said Chuck McIntosh, communications director for the Mississippi Department of Finance and Administration, which oversees the Capitol grounds.

“As of late this morning, they did not have any suspects,” McIntosh told NBC News, referring to the Capitol police.

Espy told reporters on Monday that he wasn’t linking Hyde-Smith to the nooses.

“I can’t connect that to her. I wouldn’t do that. That’d be unfair,” he said.

The closing weeks of the Senate contest — the last of the lengthy primary season — have been dogged by racial issues.

The Jackson Free-Press reported on Friday that Hyde-Smith had attended Lawrence County Academy in Brookhaven, Mississippi, during the 1970s. The now-shuttered school — one of the so-called “segregation academies” — was founded in 1970 to flout an order to integrate the state’s schools and had a confederate general mascot, according to the local weekly.

In their debate last week, Espy accused Hyde-Smith of having given Mississippi “another black eye” on racial issues.

The Republican incumbent said her public hanging comment “was twisted, was turned into a weapon to be used against me.” If anyone was offended, Hyde-Smith said, “I certainly apologize.”

Because of the state’s racially motivated killings — Mississippi lead the nation for lynchings in the decades after the Civil War — Democrats and civil rights advocates have ripped into Hyde-Smith.

President Donald Trump is scheduled to campaign at two stops for Hyde-Smith later Monday. In a tweet on Sunday encouraging voters to cast their ballots for the GOP candidate, Trump wrote Hyde-Smith is “respected by all. We need her in Washington! Thanks!”