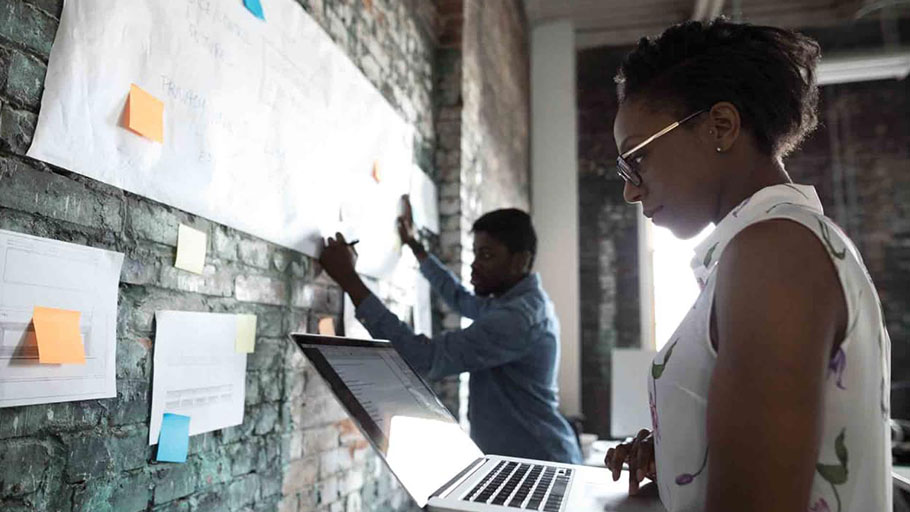 How African-Americans Are Dominating The Digital World

You Are Here: Home » Blog » News & Current Affairs » How African-Americans Are Dominating The Digital World

#Consumers2Creators: How African-Americans Are Dominating The Digital World By Pursuing A ‘For Us, By Us’ Mentality.

Nielsen’s 2018 report, “Consumers to Creators: The Digital Lives of Black Consumers”, revealed that 54 percent of African-Americans are 34 and younger, meaning the majority were born and raised in the era of rapid digital media advancements. The report makes a case that a “Black Renaissance” is taking place within the African-American community, largely due to the community’s access to technological devices and usage.

The Consumers to Creators report highlights how the African-American demographic has largely impacted the way digital content is produced in the United States. Generationally, new technologies inherently change the way we do business and today’s ever-changing digital world is no different. Tech is everywhere; it’s in the palm of our hand and literally a fingertip away significantly altering the way we handle business, consume brands and engage with the world.

With the rising use of digital platforms like social media, podcasts, video streaming and more, African-Americans are now shifting from the role of consumer to successful content creator. These platforms give African-Americans the opportunity to influence, express our culture and become entrepreneurs in our own right.

“We are on the threshold of a new business paradigm,” said Cheryl Grace, senior vice president of U.S. Strategic Community Alliances and Consumer Engagement at Nielsen. “The digital age is transforming not only commerce and the relationship consumers have with companies, but digital know-how among consumers – particularly African Americans – is fostering new levels of independence and financial freedom.”

Because of the significant impact Black Americans are making as media catalysts and creators, we are filling in the gaps that have been unfulfilled by mainstream media and now catering to our own audience through innovation – and with innovation comes opportunity. Since technology has opened the doors for innovation and ownership within our communities, the report states that Black entrepreneurs are developing new platforms, generating new content and marketing new products.
The Nielsen report also states that African-Americans are now identifying gaps in entertainment, product delivery and services. African-Americans are using technology to fill those gaps and bypass barriers to critique, connect, collaborate, create and ultimately compete with companies that have failed to cater and understand our community’s unique needs.

For African-Americans, these advancements and innovations have played integral roles in how Black households have redefined class and navigated socioeconomic status, while also staying up to speed with an evolving American business landscape. Because of this, the black community is open to new opportunities, entrepreneurship and educational advancement which in turn unearths opportunities to establish black-owned businesses and thrive economically.
Actor, activist and entrepreneur Jesse Williams, for example, is one digital creator who personifies the consumer to creator message. Williams co-created the mobile game BLeBRiTY, which celebrates the Black experience. The charades-inspired game targets Black consumers with categories such as ‘Momma Phrases’, ‘Bad and Bougie’ and ‘The 90s.’’ It has gained much success from winning a Webby Award, being selected as “Game of the Day” and featured in the top spot on the iTunes AppStore charts.

“Undisputedly the vanguards and early adopters of popular American cultural trends, African- Americans have fully embraced today’s digitally connected marketplace,” said Andrew McCaskill, SVP of Global Communications and Multicultural Marketing at Nielsen. “Black consumers are engaged and plugged into a digital, multi-platform universe in ways that are redefining the African American experience with an unprecedented sense of community, economic consciousness and digital-native know-how.”
According to Nielsen’s report, since Black consumers are taking a “for us, by us” approach to becoming entrepreneurs by building their own platforms and businesses, new Black financial ecosystems are being created. Some examples of people in the entertainment industry who are taking this approach include musicians Jaden Smith and Ray J. They are taking advantage of the strong online presence by creating and promoting successful businesses in the digital economy. Smith is running an eco-minded plastic recycling company he founded with his dad, Will Smith, and Ray J has an electric transportation start-up.

Many African-Americans have used social media as a platform for content creation, where people have turned their presence online into successful businesses by receiving entertainment contracts and endorsement deals. They have also used social media to celebrate our culture, voice our opinion and promote social justice and political awareness. With their ability to critique and connect, African-Americans are also holding brands accountable on social media platforms. With Twitter specifically, many share their thoughts on past and current issues that are affecting the culture today. Movements such as #BlackLivesMatter and #OscarsSoWhite are making mainstream America more vigilant and aware of the issues that are affecting us today.
And since representation matters for consumers of color, companies such as Netflix, Amazon and Apple are making big investments in Black experience-centered content too, as they’re seeing Black Americans have a big influence on content creation. According to the report, Black communities have a buying power of $1.3 trillion and consumers have used this power to support brands that align with their preferences and give up supporting brands that do the opposite. A recent Nielsen analysis of television viewership found that shows with a predominantly Black cast or a storyline focused on a Black character are drawing substantial non-Black viewership. Networks are seeing that authentic Black storytelling is the key to increase numbers in viewership and loyalty to their companies.

All in all, digital media has changed how African-Americans consume entertainment, communicate and even promote social justice. Since we are a demographic that likes to stay connected with one another, Black Americans have adopted digital formats at a higher rate than the general population and have used the formats as a powerful platform to amplify our voices. The digital world has enabled us to create, share and control our own content while making an impact on not only entertainment, but education and social awareness too.

This piece is brought to you by Nielsen.