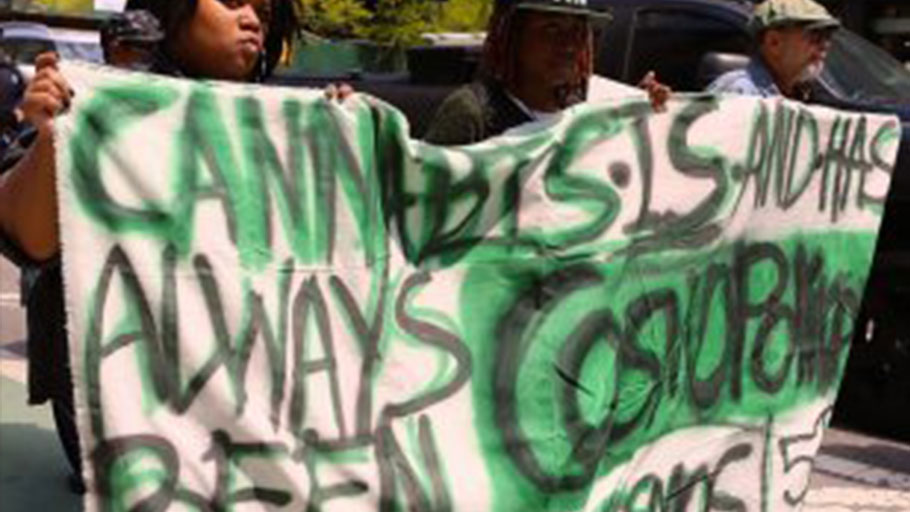 War on Marijuana and Disparate Policing Communities of Color Must End

You Are Here: Home » Blog » Commentaries/Opinions » War on Marijuana and Disparate Policing Communities of Color Must End

The harm that biased marijuana enforcement has on Black, Latino, and low-income communities is real.

I went into law school thinking that I wanted to be a civil rights attorney. As a black queer woman, I understood many of the social injustices experienced by marginalized communities and wanted to use my law degree to fight the many systems of oppression that plagued and terrorized the communities that mattered to me. It wasn’t until my third year of law school, that I that recognized current cannabis policies as a legitimate social justice issue – particularly due to the way marijuana prohibition is enforced.

In the United States, despite similar rates of consumption and sales across racial and ethnic lines, African Americans are 4x more likely to be arrested for a marijuana offense.

According to Michelle Alexander, legal scholar and author of The New Jim Crow, “Nothing has contributed more to the systematic mass incarceration of people of color in the United States than the War on Drugs.” During the past two decades, this war, has been fueled largely by marijuana arrests. A 2010 ACLU report exposed that almost half of all drug arrests were for marijuana and that 88% of those arrests were for marijuana possession only.

For decades police have targeted communities of color, using marijuana laws as their legal excuse to stop, search, arrest, prosecute and criminalize Black and Brown individuals while simultaneously and comparatively ignoring the same conduct happening at similar rates in many white communities. This is what is meant when folks say that the war on marijuana is a war on communities of color.

This, however, should come as no surprise as marijuana prohibition was racist from its inception. Over 80 years ago, America’s first Drug Czar, Harry Anslinger crusaded marijuana’s prohibition claiming that black people and Latinos were the primary users of marijuana, and that it made them forget their place in America’s society.  The same racial stereotypes and race mongering that allowed marijuana to be made illegal are alive and well today.

Although more Americans than ever before want marijuana legalized, communities of color continue to be disproportionately impacted by its illegality. These disparities persist even in states that have made reforms to cannabis policies through decriminalization, medical legalization and adult use legalization. These continued disparities further reinforce the ‘war on communities of color’ narrative.

As long as there are penalties associated with marijuana use, and police officers are able to continue to disproportionately enforce those penalties without accountability, Black, Latino and low-income communities will continue to be harmed by cannabis laws. And make no mistake this harm is real.

In fact, the policing of communities of color for marijuana offenses can be deadly. In July of 2016, St. Anthony, Minnesota Police Officer Jeronimo Yanez killed Philando Castile after Yanez allegedly feared for his life after Castile ‘had the audacity to smoke marijuana’ in front of a 5-year-old child. Apparently Castile’s second-hand marijuana smoke warranted death.

Furthermore, policing often haunts Black and Brown persons alleged to associate with cannabis even after their tragic deaths. Sandra Bland, Trayvon Martin, Freddie Gray and countless other deaths have been further stigmatized by police and media who seek to use past experiences with marijuana to convey criminality and justify what can only rightfully be described as injustice.

Even non-fatal encounters with police carry negative impacts that can last a lifetime. The collateral consequences of a marijuana offense and accompanying record affect eligibility for public housing, student financial aid, employment opportunities, child custody determinations and immigration status. Moreover the experiences that Black and brown communities have with law enforcement officials regarding cannabis have diminished faith in, and respect for the law and those that disproportionately enforce it.

Communities of color are long overdue for relief in this racially enforced war on drugs. Those who care at all about Black and brown communities must too come to realize that past, current and future cannabis policies are a social justice issue and that the war on drugs and the policing of communities of color, particularly for marijuana possession, must come to an end.

This piece first appeared on the Drug Policy Alliance Blog

*Editor’s note: In this monthly blog series, the Drug Policy Alliance will examine the nexus between the war on drugs and law enforcement practices that result in the mass criminalization, incarceration and dehumanization of communities of color. These pieces will reflect on the ways in which the institutions of policing and prosecution – both driven by calls for “law and order” in the wake of the war on drugs – continue to function as instruments of reinforcement for the overarching structural racism on which the drug war was founded.