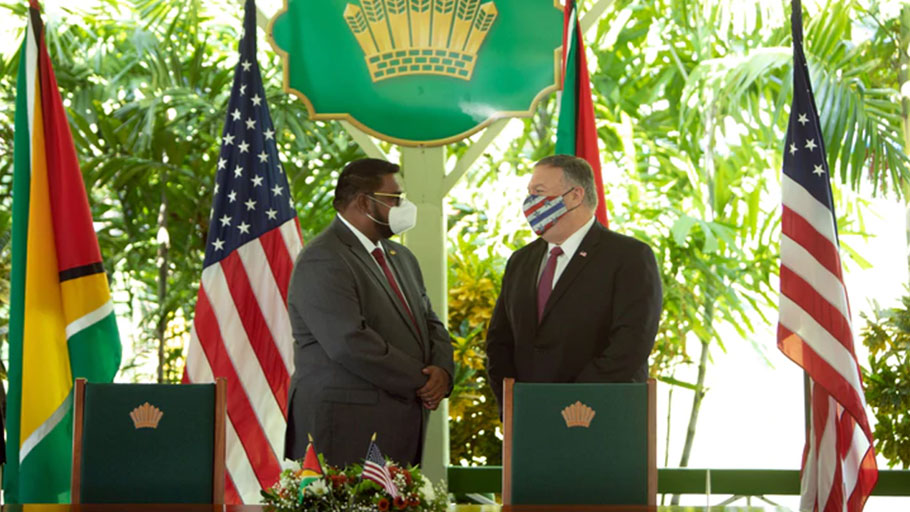 The latest episode of U.S. imperialist intrigue in the Americas deserves our critical attention. On September 17, US Secretary of State Mike Pompeo landed in Suriname, beginning a diplomatic tour of South America that will include additional stops in Guyana, Brazil, and Colombia.

But what is the motivation for Pompeo to visit Guyana, a country demeaned until recently as the “second poorest in the hemisphere?” Guyana, as well as Suriname, is central to the subversion of Venezuela, its neighbor to the west. In recent years, as energy multinationals withdrew from Venezuela under the threat of US economic sanctions, the Guyana-Suriname Basin emerged as a hotbed of offshore oil and gas discoveries totaling over 8 billion barrels of crude oil equivalent. Amidst competing claims to maritime territory by the Bolivarian Republic of Venezuela, the presence of ExxonMobil production vessels in Guyanese waters established a new battleground between US multinational capital and Venezuelan state capital. Instead of brokering peace, Pompeo aims to stir the pot of disruption.

As critical observers, we ask: What is being subverted in the region, national sovereignty or workers’ self-emancipation? We must be precise in our appraisals of US Empire and its consequences for the working people of the Greater Caribbean.

Nation-states and governments are not “peoples.” They are hierarchies of social classes. And it is working people that produce wealth, not nations. In their struggles against US Empire, Caribbean workers cannot passively cast their lot with mercenary political parties or be conscripted into projects of national or racial chauvinism. A new social compact is needed to unite workers across the Americas. Their livelihoods cannot rest at the whims of ruling elites and their partnerships with extractive capital.

While newly elected Guyana President Irfaan Ali and his PPP/C Government prepare to hold court with Pompeo by adorning the capital city of Georgetown with US flags and billboards, the working people of Guyana are confronted once again with the deadly realities of racial violence. The horrific murders of two Afro-Guyanese teens, Isaiah and Joel Henry, and the apparent reprisal killing of a young Indo-Guyanese man, Haresh Singh, have stoked fears of widespread civil conflict. Guyana’s politics, and Venezuela, in a different way, are organized around racial insecurity to legitimate aspiring rulers above society. In their respective outreach to multinational capital, politicians in both parties share a militant hostility to the self-directed liberation of the poor and peasant classes.

As the only English-speaking country in South America, the simmering antagonisms between Afro-Guyanese and Indo-Guyanese have their roots in the scars of bondage wrought by slavery, indentureship, and British colonial rule. The insistence that this conflict is a natural outgrowth of a racially-divided populace is refuted by heroic struggles of Guyanese working people for self-emancipation, socialism, and multiracial unity. Struggles of this variety have been frequently thwarted by the racial patronage politics advanced by both the ruling PPP/C and opposition APNU+AFC. The reticence of Guyanese elites to condemn this violence indicates that their concerns lie with the market futures of ExxonMobil’s offshore investments rather than with the futures of Guyanese toilers.

For Pompeo, the motivations for the summit are clear. After the disputed March 2 election in Guyana, Pompeo threatened incumbent APNU+AFC officials with individual sanctions before a Caribbean Court of Justice ruling confirmed the electoral victory of the PPP/C. In Georgetown he likely sought assurances from Ali that his government will honor the advantageous terms of the product-sharing contract with ExxonMobil despite clamors from Guyanese civil society to renegotiate the meager 2% royalty on all oil sales.

We can speculate as to what followed: Pompeo offers his support to Guyana’s territorial claim so long as he refuses to bow to populist demands for a larger “piece of the action,” as the Trinidadian calypsonian Black Stalin once put it. As the Trump administration leads a bipartisan effort to destabilize the Bolivarian Republic through economic sanctions and the international masquerade of Juan Guaidó as the legitimate sovereign of Venezuela, we must stay alert.

Both Guaidó and his nemesis, Nicolas Maduro, remain conspicuously united in their claims to the disputed “zona en reclamación” along the Guyana-Venezuela border. In exchange for the US State Department’s counsel to Guaidó to back off the border issue, it is not inconceivable that Pompeo will request Ali’s tacit support for Guaidó against Maduro and the PSUV (The United Socialist Party of Venezuela).

Ali’s PPP/C has already given indication it will support Guaidó by showing support for the U.S. nominated leader of the Inter-American Development Bank (IDB), Mauricio Claver-Carone. Claver-Carone will continue the policies of the IDB that wish to destabilize Venezuela’s economy. But the IDB’s opposition to Maduro does not mean that Venezuela’s state capital has not forged compacts with multinationals who have contempt for working people at home and abroad.

Both sides of the US Congressional aisle seek nothing less than total economic domination over the Eastern Venezuela Basin. Our opposition to big stick diplomacy cannot be reduced to the valorization of a postcolonial bourgeoisie as a progressive beacon. State capitalist development on whatever terms is not workers’ self-emancipation.

In Guyana, racial tempers flare as the government lends its assurances to oil multinationals. As anxieties heighten over the impending oil windfall, it is unclear whether this revenue will generate economic opportunities or secure the livelihoods of working people of any race. In Venezuela, the PSUV lines up its supporters behind the jingoist claim to the contested territory of the Essequibo while repressing independent forces on the left in its own country. It wishes to deny self-directed expressions of popular self-emancipation in the communes that are present.

In Trinidad, Venezuelan migrant workers fleeing from the starvation of US sanctions experience harassment and sexual violence. No government or party in the Caribbean region today is charting a path forward beyond national chauvinism toward popular self-management and international solidarity.

What is needed is a new “working people’s alliance.” Today, this must extend beyond the party of the same name organized by Walter Rodney decades ago. Our focus on Guyana, as a firewall against new imperial machinations, must be on mobilizing ordinary people to reject all sides of the “oil war” between nation-states over paltry extractive rents and royalties. We must reject all forms of hierarchy and domination at home and abroad that fear the direct democratic rule of the majority.

Back-channel negotiations between embassies in imperial centers and peripheries, whether the latter express a militant or accommodationist tone, are about containing popular uprisings against all of them. Threats to the Bolivarian state’s efforts to control its own oil do not curb its desire to control and subordinate its own labor. The working people of Guyana, Suriname, and Venezuela will prosper in alliance with the working people of the Americas, not rentier bureaucrats of capitalist or putatively socialist leanings.

The terms of dependent participation in the global economy cannot be transformed without unleashing the power of ordinary people. Therefore, our concern should not merely lie with the current Government of Guyana becoming more hostile to the Venezuelan government in making a greater alliance with the U.S. Though we should slap such allegiances down, our focus must be how do we mobilize the Latin American and Caribbean working people against all hierarchical government and imperialist disruption.

Workers’ emancipation cannot exist so long as national elites are permitted to manage and accumulate capital on their own authority. Empire is built on the exploitation of labor, both in the imperial centers and periphery. Nation-states and their attendant political and linguistic borders are themselves products of European colonialism in the Americas. Genuine workers’ self-emancipation demands that we organize beyond these boundaries rather than seeking liberation in the empowerment of a national bourgeoisie or alternative blocs of capital.

Regional solidarity must be forged by working people themselves, not elite bureaucrats and statesmen. We rally around the toilers in Guyana, Venezuela, Suriname and in the Caribbean region; not its states and ruling classes. A workers’ alliance must be cultivated across racial and national divides for the peoples of the Greater Caribbean and South America.

As the US State Department’s ongoing campaign to starve and isolate Venezuela demonstrates, a rentier petrostate is an unstable foundation on which to build an international labor movement. Rather than a skirmish for contested territory or a greater piece of the multinational action, whether pursued by the rulers of Guyana or Venezuela, our horizon must lead us toward a multiracial and multilingual federation from below of workplace councils and popular assemblies.

The people of Guyana, Suriname, and Venezuela deserve a direct democracy where the majority can oppose the minority that rules above society. We want to organize our own economy and foreign affairs. Alert to social ecology, this international alliance will burst the myth that working people must accept the rentier state or face poverty and starvation.

We must tell Pompeo and the Trump administration that Latin America and the Caribbean are not the backyard of the U.S. from which they can extract resources and exploit our labor. We must tell the statesmen of the “south” that the accumulation of extractive rents does not spell an end to the exploitation of labor by capital. Our struggle must be against imperialist wars and for the emancipation of labor from nationalist feuds and racial antagonisms.

Ryan Cecil Jobson is Assistant Professor of Anthropology at the University of Chicago. Matthew Quest has taught History and Africana Studies most recently at University of Arkansas at Little Rock. See his essay on C.L.R. James and the Haitian Revolution in The Black Jacobins Reade