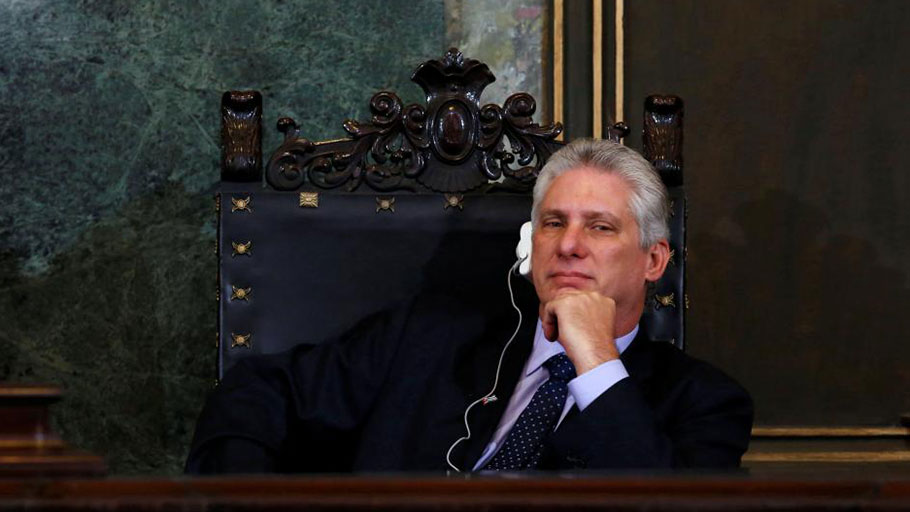 You Are Here: Home » Blog » Commentaries/Opinions » Who Is Miguel Diaz-Canel, Cuba’s New President?

The Cuban National Assembly elected Miguel Mario Diaz-Canel Bermudez, a 57-year-old Cuban born two years after the island’s socialist revolution, as the country’s new head of the Council of State and therefore the president of the Caribbean country. During his speech after he was sworn-in, Diaz-Canel vowed to be faithful to the legacy of late Cuban President Fidel Castro and his revolution.

Two years after Raul began acting as temporary president in 2006 when Fidel became too ill to govern, the younger brother was elected to by the council following a lifelong service to the revolution.

In 1953 Raul fought alongside his brother at the Moncada barracks oust the authoritarian regime of Fulgencio Batista. When the attempt failed they served 22 months as political prisoners together. Raul introduced Fidel to Che Guevara in Mexico and together they launched the famed ship Granma toward Cuba in 1956 and for three years fought a guerrilla campaign from the Sierra Maestra mountains, overthrowing the Batista government in 1959.

Raul was the minister of defense, vice president and second secretary to the party for the 47 years that Fidel served as the nation’s president. While Raul once managed a close relationship with the Soviets, he also managed to strengthen Cuba’s national economy and political sovereignty as the Soviet Union dissolved in 1991.

As president, Raul adopted a less militant stance toward socialism and creating space for individual enterprise. He threw out a measure that banned Cubans from interacting with foreign visitors, made it easier for citizens to buy and sell houses and cell phones.

In 2010 the president reduced the state economy cutting some half a million government sugar, farming, construction, health and tourism jobs saying, saying, “Either we change course or we sink.” Raul, now 87, opened up diplomatic ties with the U.S. during his ten-year administration and owing to an agreement with former president Barack Obama the island is, little by little, getting Internet access.

Even though the probable president was caught on tape accusing the U.S. and various European countries of wanting to dismantle the revolution, experts say the Diaz-Canel will follow the company line.

Diaz-Canel has been working his way up the Communist party hierarchy for nearly 30 years. He was a part of the Communist Youth Union and took part in an international mission in Nicaragua. Between 1994 and 2003 Diaz-Canel was the community party leader of the Villa Clara province, among other party posts. He was promoted to be part of the 14-member Politburo – Cuba’s communist council and acted as the minister of higher education between 2009 and 2012 when he became vice president and Minister of Cuba.

“He’s a man without nuances who doesn’t displease, but neither do people fall in love with him. He’s made it clear he won’t be the man of change and who has gotten where he is by completing orders impeccably,” says Francisco Perdomo, a Cuban professor in international relations.

Though described by some as a yes-man, he also has a reputation for being warm and attentive to both Cubans has worked with as well as foreigners.

John McAuliffe, executive director of the Reconciliation and Development Fund tells La Tercera that he saw Diaz-Canel at a state function while vice president: “enjoying the music of Los Van Van and talking with politicians from the United States and Chile. He was receptive to whoever wanted to take a photo with him. His informality and accessibility indicated he had a personal style different from the withdrawn generation of Cuban leaders.”

Diaz-Canel knows he has a tough task ahead of him. “Society is demandingmore,” he said as vice president. This means expanding Internet to the more than 5 percent of the population that currently has access and creating a more open media environment, measures that Diaz-Canel says he supports. Economically, comments Michael Bustamante, a professor at the Florida International University, the biggest challenge the new head of state faces is to unite the dual-monetary system.

“On Miguel Diaz-Canel falls some of the most complicated economic challenges that the Raul Castro administration couldn’t solve. … Example number one: the dual monetary system. The unification of the Cuban monetary system is critical for its future economic prosperity,” stresses Bustamante to La Tercera. For several years the government has been saying it will converge its two currencies – the Cuban Peso (CUP) and the Convertible Cuban Peso (CUC). Yet, the CUC, initially introduced in 1994 to strengthen the economy and to be limited to tourist use, has since spread to all areas of the economy and created serious divisions in a society known for its equality.

Though academics are saying Diaz-Canel’s presidency would not be a sea change in terms of introducing revolutionary politics, this is a historical generational shift for the island, the revolution and Latin America that has used Cuba as its socialist example.