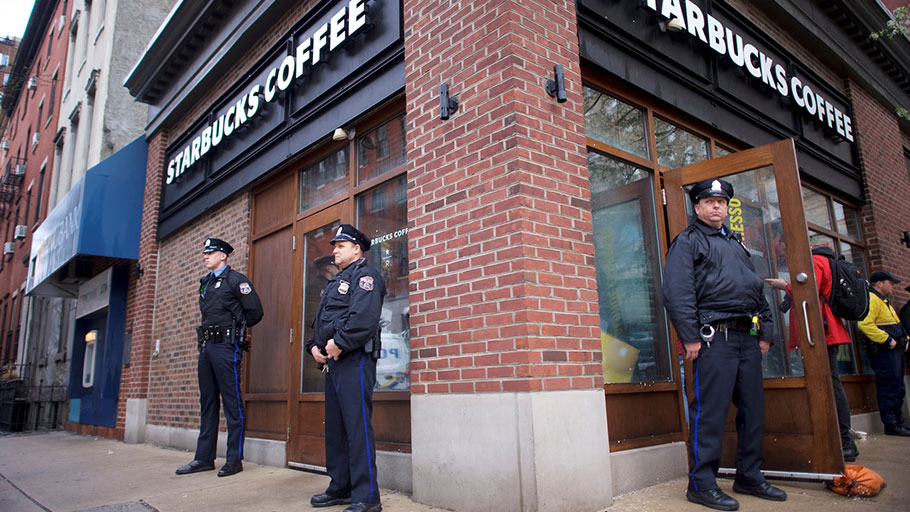 You Are Here: Home » Blog » Commentaries/Opinions » A Starbucks arrest shows how black Americans are robbed of their power

Police officers monitor activity outside as protesters demonstrate inside a Philadelphia Starbucks, where two men were arrested. Photograph by Mark Makela, Reuters

Men arrested for ‘loitering’ had no choice but to keep their heads down, out of fear for their lives. For black people, it’s a familiar situation.

After video footage went viral of two black men being arrested in Starbucks for “loitering”, many were outraged. The two men had entered Starbucks for a meeting and were instead faced with the profiling and discrimination black people experience on a daily basis.

The men spent spent eight hours in jail for a selectively enforced law. But what stood out the most for me about this injustice was the men’s powerless compliance through the entire process.

Starbucks employees have seen white women act out indignantly over missing the caramel on their lattes, and they still receive standard customer service – which does not involve calling any cops. Yet these black men were seen as a threat. In response, they saw no choice but to follow police directions out of fear for their lives.

I have also been left powerless in the face of racism. Recently, I boarded a plane to find a white family sitting in my and another person of color’s seats. Our passes spoke for themselves, but the flight attendants asked if we minded relocating across the aisle. Aware that if the roles were reversed, we would have been asked to move, I was frustrated but complied.

I avoided making a bigger fuss because I was afraid of being labeled as the “angry black woman” who escalated the situation. I felt powerless.

I am well acquainted with this feeling. I felt it when my prenatal care professionals “forgot” to inform me of my son’s health condition despite seeing it on an ultrasound weeks prior. It reappeared after being turned away from the emergency room while experiencing gut-wrenching pain that turned out to be leftover placenta. And again, more recently, when I had to watch my husband “remain calm” after his car door handle was broken by an auto parts vendor. When he complained, he was asked: “Did it work when you got here?”

Throughout history, black Americans have been forced to remain calm in the most unjust of interactions. We represent 47% of the wrongful convictions in the United States. Unfortunately, we’re conditioned to accept this mistreatment because retaliation could cost us our lives due to warped perspectives of blackness.

Being born black in America has almost always been treated as a punishable first offense. As a result, a sense of helplessness often affects the psyche of the black community. Paradoxically, we exist as both the automatic culprit and the victim. This reality weighs so heavy that many of us choose to move through life as silent as possible, afraid to rock the boat. But others of us elect to fight the uphill battle and resist, believing if you’re going to go down, it should be fighting for your basic rights.

There is technically no right or wrong way for black Americans to mourn the mistreatment we face in this nation. Some do their best to avoid it – like the Philadelphia police commissioner, Richard Ross, a black man, who said the officers did the right thing by responding to the cafe employee’s call with an arrest.

The Starbucks CEO, on the other hand, has issued a new statement calling the catastrophe “reprehensible” and wants to meet with the two men to apologize in person.

Change cannot happen until white people are as outraged at witnessing our mistreatment as we are at receiving it. Perhaps Starbucks’ decision to close 8,000 US stores on 29 May for racial bias trainingis a step in the right direction. To me, at least on the surface, this action serves as an opportunity to provide much-needed education on confronting anti-blackness in everyday social interactions.

Sadly, the outrage in response to this announcement shows we’ve got a long way to go.