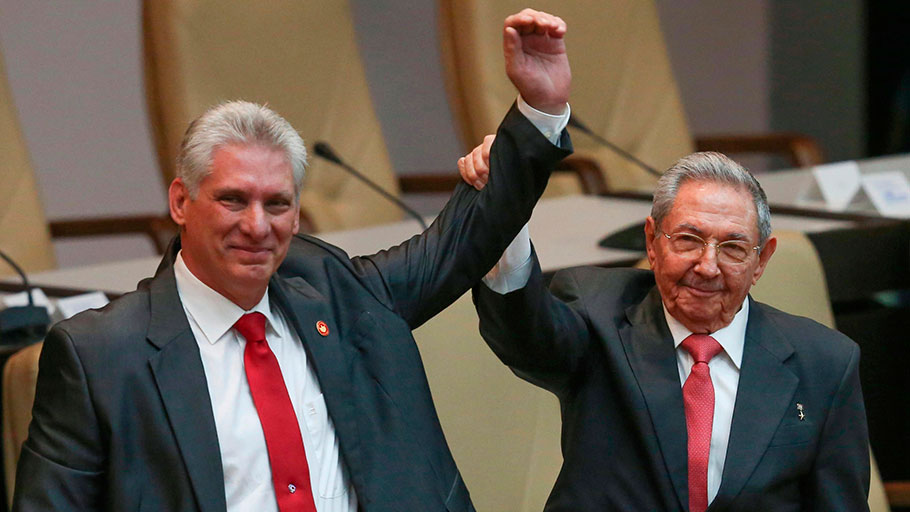 President Miguel Diaz-Canel said the new period would be characterized by “modernization of the economic and social model.”

Cuba’s new president, Miguel Diaz-Canel, began his term on Thursday with a promise to defend the socialist revolution led by the Castro brothers since 1959, giving a sober speech that also emphasized the need to modernize the island’s economy.
A stalwart of the ruling Communist Party, Diaz-Canel was sworn in to replace Raul Castro by the National Assembly in a carefully managed new chapter for the Caribbean island, aimed at preserving the political system.

“The mandate given by the people to this house is to give continuity to the Cuban revolution in a crucial historic moment,” Diaz-Canel, 57, told the assembly in his first speech as president.

He delivered a warm homage to 86-year-old Raul Castro, who took office a decade ago as his brother Fidel Castro’s health deteriorated. Fidel Castro died in 2016.

Castro will remain head of the Communist Party until a congress in 2021. Diaz-Canel, praising the reforms he ushered in as president, said Castro would remain the leader of the revolution and would be involved in major decisions.

“Since the current president arrived in office, there has been a deliberate reversal in the relations between Cuba and the United States, and an aggressive and threatening tone prevails,” Castro said.

Thursday’s session was held on the 57th anniversary of Cuba’s 1961 defeat of a CIA-backed Cuban exile invasion at the Bay of Pigs, a victory Havana celebrates as a symbol of its resistance to ‘imperialist’ pressure for change from Washington.

Diaz-Canel praised Castro’s move to renew relations with the United States. He said there would be no compromise in Cuba’s foreign policy, but in a repetition of a long-held stance by Havana, he said he would hold dialogue with anybody who treated Cuba as an equal.

“I take that as a signal that the Cuban leadership still sees value in improving relations, even if they have to wait for the next U.S. president,” William LeoGrande, co-author of a book on the secret U.S.-Cuba talks that led to detente, told Reuters.

Castro spoke highly of Diaz-Canel and gave his blessing to the younger man to take over from him as the powerful head of the Communist Party in three years. He also said the new president could serve two five-year terms, underscoring restrictions Castro imposed on himself after his brother’s decades in power.

Diaz-Canel confirmed expectations the transition would not herald sweeping changes to one of the world’s last state-run economies and one-party systems, promising there would be no return to capitalism.

Diaz-Canel, who has risen the ranks of the Communist Party over three decades, said the new period would be characterized by “modernization of the economic and social model,” without giving details.

He ended his speech the same way Fidel Castro used to: punching the air and shouting the revolutionary slogans “Motherland or death, socialism or death, we will win.”

A Starbucks arrest shows how black Americans are robbed of their power
We Need Your Support — Donate, Share, Sign-Up Ways to Support