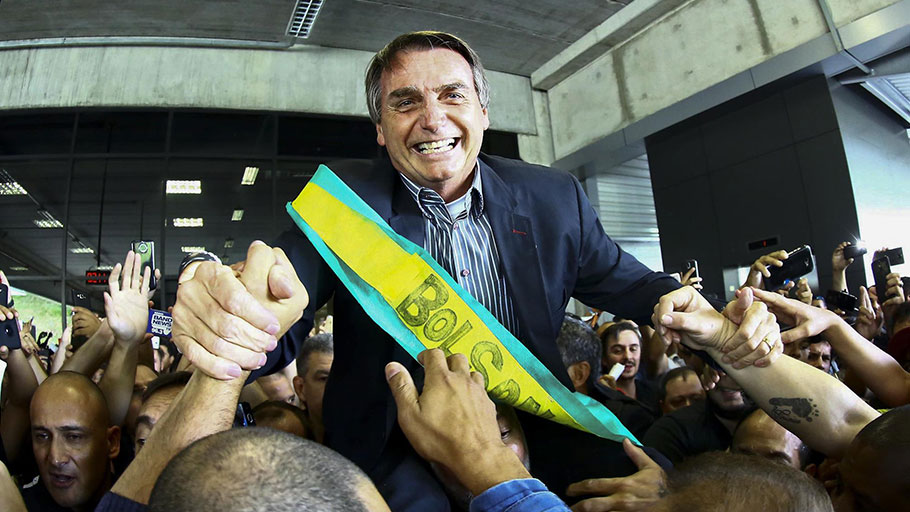 Why Brazil’s Bankers Back Jair Bolsonaro

You Are Here: Home » Blog » Commentaries/Opinions » Why Brazil’s Bankers Back Jair Bolsonaro

The frontrunner in the presidential election is finding support from the country’s bankers.

The dramatic surge in Brazilian markets is not the only factor lifting animal spirits among senior business leaders and financiers in São Paulo this week. The prospect of right-wing congressman Jair Bolsonaro winning the presidency and implementing a liberalizing economic program has kindled hopes among many that decades of Brazilian statist policies are about to be reversed.

“The first thing you have to do is take a deep breath,” comments one senior banker of Bolsonaro’s strong showing in last Sunday’s first-round presidential vote, in which the former army captain, even though he has praised Brazil’s military dictatorship, captured 46 percent of the vote. “He was not my first choice,” the banker says, “but certainly a lot of my clients are pleased.”

There Is a Sense of Guarded Hope. — A Senior Brazilian Banker

Haddad won 29 percent on Sunday and analysts estimate he needs to attract more than 85 percent of all voters that chose neither him nor Bolsonaro to win — a near-impossible task. Bolsonaro encountered a setback on Wednesday, when news emerged that Brazilian prosecutors were investigating Guedes on suspicion of fraud in relation to state-run pension funds. But the election still appears the front-runner’s to lose.

“There is a sense of guarded hope. Bolsonaro may not be the catalyst of change I would choose, but he is what Brazilian democracy delivered. Many of my colleagues are wondering how they can help. Brazil needs it,” says another senior banker.

With a budget deficit of 8 percent of the gross domestic product, soaring national debt and a business climate ranked 125 by the World Bank out of 190 countries, economists say Brazil needs a sharp dose of orthodoxy to jolt it out of economic malaise.

Among the financiers being sounded out by the Bolsonaro administration are Alexandre Bettamio, the Latin America head of Bank of America Merrill Lynch; João Cox, chairman of the board of Telecom Italia’s Brazilian unit; and Roberto Campos Neto, head of global markets at Santander Brasil, Folha de S.Paulo reported on Tuesday. All declined to comment.

Recruiting from the private sector by Bolsonaro, who is sometimes called a “Tropical Trump” because of his brash comments, conservative policies and pro-church platform, would echo similar moves by the U.S. president after he won the 2016 election.

Argentine President Mauricio Macri also recruited senior bankers and business leaders after he won in 2015 with pledges to reverse his predecessors’ statist policies. Sebastián Piñera, the Chilean president and a billionaire businessman, this week praised Bolsonaro’s economic instincts, describing them as “going in the right direction.”

The 5 percent rise in Brazil’s stock market this week, and 3 percent rally in the real currency, suggests many investors agree, despite Bolsonaro’s reputation as a lackluster congressman who sponsored only two successful pieces of legislation during his 28 years in Brasília. Concerns that Bolsonaro would struggle to govern have eased after his fledgling Social Liberal Party captured 52 seats in the 513-seat Congress. Potential allies, such as the center-right New Party, could help establish a majority coalition. Retired military officers may also provide management strength, another similarity with Trump. Bolsonaro’s running mate, Hamilton Mourão, is a retired general.

Still, with more than 30 parties in the Congress, analysts cautioned governability could still be an issue given Bolsonaro’s confrontational temperament and how little he knows about operating Brazil’s state apparatus. Trump has also struggled in the U.S. amid reports of chaos inside his administration.

“Bolsonaro [has an] unproven ability to pick a competent executive team and manage a large and diverse coalition of parties,” says Paulo Sotero, director of the Brazil Institute at the Woodrow Wilson Center. “Bolsonaro may be able to win, but it remains to be seen if he will be able to effectively govern.”

Perhaps the greatest fear among Bolsonaro’s many critics is of growing violence, given his frequent misogynistic and homophobic comments on the campaign trail, and his recommended solution — liberalizing gun ownership — to growing Brazilian crime.

The Workers’ Party, which has governed Brazil for most of this century and presided over the country’s deepest recession and biggest corruption scandal, has meanwhile painted Bolsonaro as an authoritarian who could return Brazil to dictatorship.

“Brazil needs its boat to be rocked. Will Bolsonaro break it?” asks the second banker. “There are many ifs and buts. In the end, you must have faith in the country’s institutions. I do.”

Not all São Paulo high-flyers are rooting for Bolsonaro. Celebrity chef Helena Rizzo caused an uproar among her elite clientele, many of whom threatened to boycott her restaurant, Maní, after she posted an Instagram photo of her kitchen staff with middle fingers raised and #EleNão (which translates as #NotHim) written on her arm.

“Who can guarantee … that a chef with these manners doesn’t spit on the plates of her clients,” said one comment. Rizzo was forced to publish a note clarifying that the post was a personal opinion and not intended to judge her clients’ politics. “My gesture is a protest against prejudice, chauvinism, racism, homophobia and misogyny,” she said.