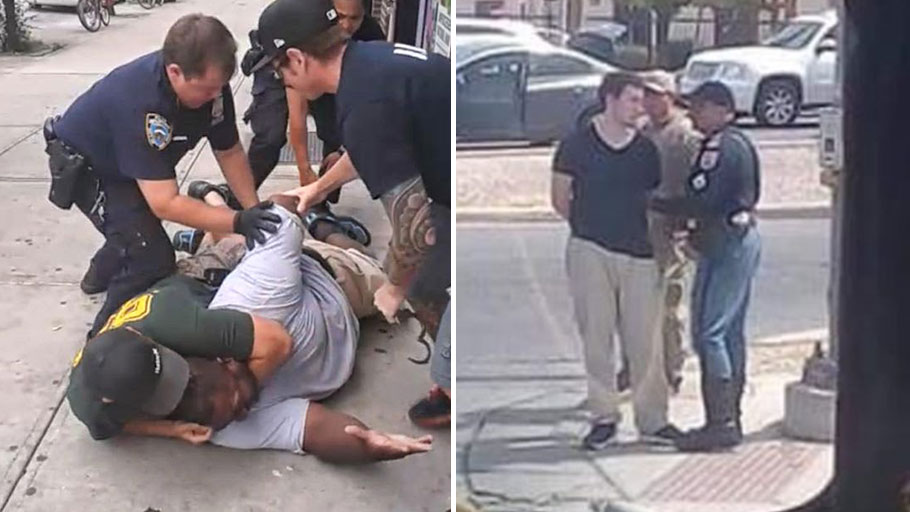 Why Do White Mass Killers Always Seem to Live Another Day?

You Are Here: Home » Blog » Commentaries/Opinions » Why Do White Mass Killers Always Seem to Live Another Day?

Eric Garner on left, Patrick Crusius, the El Paso shooter on the right.

Connor Betts, the mass shooter in Dayton, Ohio is an anomaly. He is an anomaly not because he murdered nine persons less than 24 hours after Patrick Crusius massacred 20 in El Paso. He is different because he was gunned down by Dayton police. That’s not the usual pattern. The pictures of Crusius being gently handcuffed and calmly being talked to by arresting officers after his rampage stood in stark and infuriating contrast to the picture of Eric Garner being body slammed to the pavement by NYPD officers and choked to death by an officer.

Garner was unarmed, harming no one, no hint of any racial or hate animus, yet he is dead. Crusius was armed to the teeth, committed mass murder, there is an alleged manifesto in which he spewed hate against illegal immigrants, most notably Hispanics, yet he is very much alive. The photos of Garner being violently assaulted by a phalanx of NYPD officers and Crusius’s kid glove treatment by El Paso officers has been looped on social media with many eyebrows raised. The operative words that are also looped repeatedly in the coverage of the mass murders was that Crusius surrendered “without incident.” Garner unfortunately never had that opportunity, and he’s dead.

The El Paso and Dayton mass killings came just days after FBI director Christopher Wray announced what has been repeatedly well documented. That’s that most of the acts of domestic terrorism have been committed by young white males and there’s a direct link between their acts and white supremacy groups or at the very least an addiction to white supremacist propaganda tracs, websites, and literature.

In more than a few cases, FBI and other law enforcement agencies had early warnings about some of the mass killers. But they still walked free. That freedom cost lives, another community ripped apart in agony, and the by now all too familiar soul search about how this could happen. Federal and local enforcement officials have been no help in giving an answer. They bemoan the obvious fact that white nationalist groups have surged in the nation and much of the surge has happened right under their noses. Their answer is tantamount to a throw up of the hands when they flatly said they have no real answer to the threat other than make arrests when they can.

There’s no mystery why the impotence in response to the grave threat guys like Crusius pose. He is white, male, educated, and if his rantings are to be believed an America firster. He has the right racial and social pedigree that immunized him from profiling, surveillance, scrutiny, and, judging from his repeated arrest record, vigorous prosecution, conviction, and a lengthy stretch behind bars.

Countless surveys and studies have repeatedly shown that that there’s no such rarified pass from scrutiny for black, or Hispanic males. Garner is the obvious proof of that. The only time officials have slapped the domestic terror threat on organizations and have used every weapon, legal and illegal, to destroy the alleged domestic threat were to groups such as the Black Panthers, and other black militant organizations. They had no problem figuring out what to do about them and that’s eliminate them.

The pattern is always predictably the same in the inevitable avalanche of news clips, press reports and news features on men such as Crusius in the aftermath of their murderous attack. They are described as “troubled,” “a loner,” ‘hostile,” and “no clue he was dangerous.”  Trump after one such mass murder jumped in with the stock characterizations reserved for white mass killers, as “mentally disturbed,” “bad and erratic behavior,” and with what’s hardly the revelation of the ages “a big problem.”

The Charlottesville, Virginia rampage by assorted white nationalist groups in August 2017, should have sounded loud the alarm bell that white nationalist and white supremacist groups have touched the delusional and loose wires in the heads of a more than a few impressionable, distraught, alienated, and unhinged, young white males. They have easy access to the big killer guns, and stocks of ammo. They are not routinely profiled by police. So, they can take pictures with guns, parade with guns publicly, and blast away at rifle ranges or at training sites. They have no fear of exposure or arrest.

The painful fact is that Crusius is an integral part of this sordid American saga. He could easily be the neighbor next door, the parent at a PTA meeting at a local school, or church, and always a resident of a largely white suburban community. This makes it a near impossibility to turn the mirror inward and admit that that kid who many merely write off as an eccentric, a loner, or just a plain odd ball, could easily turn into a mass killer.

Trump issued the obligatory statement condemning the El Paso carnage. This came just days after he spent an entire week and before that practically an entire presidential campaign railing at the peril of illegal immigrants. The same peril Crusius allegedly ranted about. A connection between the two? Whether there is or not, Crusius and Betts will not be labeled a perennial menaces to society, or terror threats. The pass they and men like them continue to get remain firmly in their pocket and that’s why Crusius lives another day and Betts is an anomaly.

Earl Ofari Hutchinson is an author and political analyst. He is the author of  Let’s Stop Denying Made in America Terrorism https://www.amazon.com/dp/B0193MVWO8. He is a weekly co-host of the Al Sharpton Show on Radio One. He is the host of the weekly Hutchinson Report on KPFK 90.7 FM Los Angeles and the Pacifica Network.