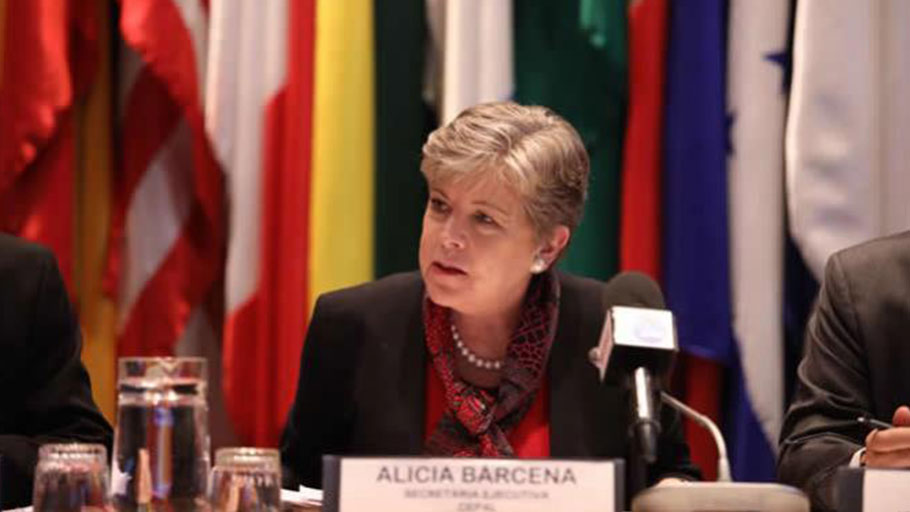 Santiago, Chile – The Economic Commission for Latin America and the Caribbean (ECLAC) expects economic growth in the region to continue to decline, due to an international context of greater uncertainty and complexity, and weak performance by investment, exports, and consumption.

This is the outlooks of the annual Economic Survey of Latin America and the Caribbean 2019, announced this week by Alicia Bárcena, Executive Secretary of the United Nations regional organization, at a press conference in Santiago, Chile.

According to the report, the region will grow this year by just 0.5 percent a lower figure than the 0.9 percent registered in 2018. This performance is attributed to the effects of a slowdown in synch with the global economy, which has meant an unfavorable international scenario for the region. Likewise, the low growth internally is due to the lack of momentum exhibited by investments, exports and a fall in public spending and private consumption.

Compared to previous years, the slowdown in 2019 will be generalized and affect 21 of the 33 countries of Latin America and the Caribbean. On average, South America is expected to grow by 0.2 percent, Central America 2.9 percent and the Caribbean 2.1 percent.

‘The region is facing an external context of greater uncertainty and growing complexity: less momentum from world economic activity and global trade; greater volatility and financial fragility; questioning of the multilateral system and an increase in geopolitical tensions,’ indicated Alicia Bárcena.

According to the Economic Survey 2019, fiscal space has been restricted by insufficient income levels to cover spending, which translates into deficits and an increase in debt in recent years. Moreover, the effects of the growing foreign exchange volatility and greater depreciation will limit the ability of central banks in the region to deepen policies to stimulate aggregate demand, in addition to the fact that the structural conditions accentuate external vulnerability and do not help to spur growth (export structure focused mainly on primary goods and falling trend in productivity).

According to ECLAC, policy space needs to be expanded to tackle the slowdown and contribute to economic growth, with measures in the fiscal and monetary areas, as well as in investment and productivity.

In the fiscal arena, the survey cites the need to reduce tax evasion and illicit financial flows; promote the adoption of taxes related to the digital economy, environment, and public health; and reassess tax expenditures to align them toward productive investment.

In terms of monetary policy, the report calls for promoting economic growth without compromising foreign exchange and pricing stability; while on investment matters and productivity, it is imperative to increase participation by knowledge-intensive sectors in the productive structure through a more active role by public and private investment; reorient investments toward sectors with greater momentum; and adopt stimulus policies that have an impact in terms of innovation, learning and quality jobs.

The second part of the Economic Survey 2019 analyzes the structural changes that have occurred in the international financial system in terms of instruments and agents, subsequent to the global crisis of 2007-2008 from a regional perspective.

The report posits that the bond market has gained relative importance with respect to the banking system. It also shows that levels of concentration, interconnectivity, and pro-cyclicality have intensified. In addition, the level of global debt is generalized and registers record levels (320 percent of GDP), in a context of low growth.

In order to tackle these challenges, the report recommends expanding and standardizing the spectrum of vulnerability indicators. The document likewise advocates advancing toward broader and more homogeneous macro-prudential regulation to encompass not only the formal banking sector but also all financial agents – including the shadow banking system, as well as different instruments.