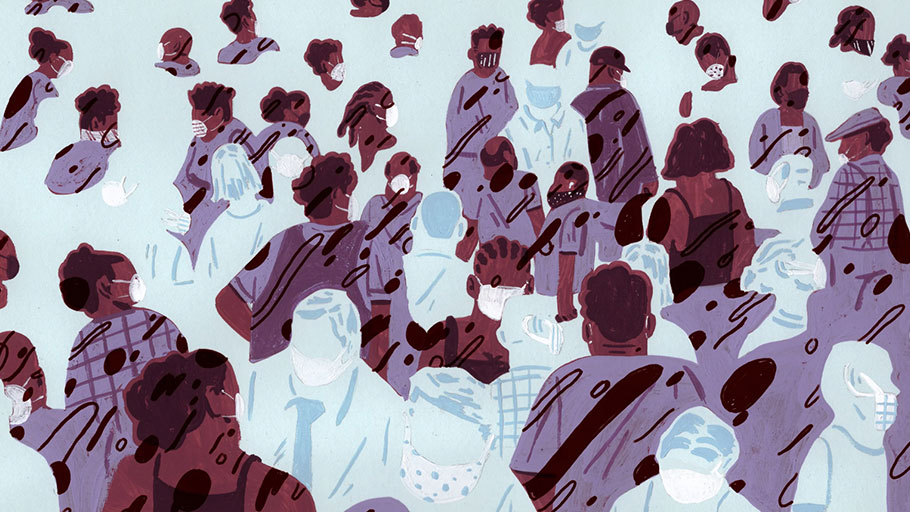 An illustration about how the coronavirus is especially ravaging the African American community. Image by Jamiel Law for the New Yorker.

We are strong. I know we will come through this together. Whereas now there is despair, desperation and death, there will someday soon be recovery, renewal and life. I anticipate things will change. Perhaps online grocery shopping and virtual doctor visits will grow in popularity. We may also see a higher occurrence of daily hand-washing as a result of our new habits. But who is the “we” who will get through COVID-19 together? More importantly, will “we” all get through this in the same way? While a collective impact brings us together, does that same collective impact separate us more?

Most of the “we” have never been in an African-American home, neighborhood or business. By now, most of us have seen the numbers. The race-related data surrounding the coronavirus speaks loudly in a system that typically seeks to be quiet or silent in acknowledging health, education and economic disparities among African-Americans. For example, it has been reported:

These numbers confirm that there is both a physical and mental seclusion of communities of color during this pandemic. For those dealing with economic devastation while fearing for their health, their needs are compounded. Patterns of a racial divide in the COVID-19 outbreak and response are being seen in New Orleans, Milwaukee and other large urban areas where demographics reflect non-white communities. Who is the “we” surprised by these numbers?

The relevancy of Michelle Alexander’s voice is clear here. She reminds us, “We find ourselves in this dangerous place not because something radically different has occurred in our nation’s politics, but because so much has remained the same.”

Through the government’s efforts to remove structural racism from the equation, we have already seen “victim-blaming,” and it remains unchanged. Following Hurricane Katrina, we heard, “They had cars; they could have left!” Here we are again. The victim-blaming amid COVID-19 further marginalizes African-American survivors of the virus and minimizes the systemic racism contributing to their high rates of infection.

For the dominant population, this marginalization makes them feel safer and desensitizes them: It is “the others” who are infecting themselves; it isn’t “we.” It replaces feelings of empathy with those of pity—a way to say, “I’m glad it’s not me.” For example, after it was discovered that Virginia’s governor Ralph Northam wore blackface as a youth, Susan Lanzoni wrote:

Without empathy—the combined emotional and rational understanding of the impact of racism in the lives of African-Americans—he is likely to neglect policies that could alleviate systemic discrimination. Indeed, the lack of empathy on the part of white Americans has long impeded the fight for racial equality.

In his article, Stop Blaming Black People for Dying of the Coronavirus, Ibram X. Kendi, Director of the Antiracist Research and Policy Center at American University, wrote:

And Americans are blaming black people. To explain the disparities in the mortality rate, too many politicians and commentators are noting that black people have more underlying medical conditions but, crucially, they’re not explaining why. Or they blame the choices made by black people, or poverty, or obesity—but not racism.

Ignoring racism when discussing disparity in the COVID-19 morality rate is akin to discussing breathe with no reference to oxygen. Whether by intent or ignorance, keeping race out of the conversation means we distance ourselves from dismantling structural racism. Once again, we must ask, “Who is ‘we’?” Kilolo Kijakazi brilliantly describes how the we machine works:

Research has shown that differences in access to high quality jobs and economic stability, quality education, health care services, and quality neighborhoods—the social determinants of health—contribute to racial inequities in health. Structural racism—the policies, programs, and institutional practices that facilitate the well-being of white families while creating barriers to the well-being of Black families—results in this unequal access to the health- and opportunity-promoting social determinants that drive the racial health inequities laid bare by COVID-19.

As an immediate response to the racial intricacies of COVID-19, I am inspired by those organizations and groups that have become their own gatekeepers. When we become our own gatekeepers, we take on the responsibility of what we do. The African American Strategic Partnership (AASP) in Pittsburgh is developing their own PR awareness campaign for the community. Institute of the Black World 21st Century (IBW) has begun the process of implementing a culturally astute crisis listening line for first responders of color amid the COVID-19 pandemic. Pittsburgh has made national headlines concerning its food deserts, so the black faith community under Love Followship Church and local agencies have come together in securing funding and manpower to provide food to communities in need.

While an effective vaccine appears to be far away, we know we will get there. But for that “we” to be inclusive of all of us—that greater “we”—we must all lean into some uncomfortable conversations on the role systemic racism has played in this pandemic. For too long, we have not moved beyond acknowledgement, and that is why more African-Americans are losing their lives, not just to this disease, but to the daily pandemic of racism. “We” must remain diligent in gatekeeping our communities to uphold the importance of the black family during this time. “We” must advocate to address the disparities we see, for as we have all experienced, life can change in an instant.

Thank you all for “listening in color,”