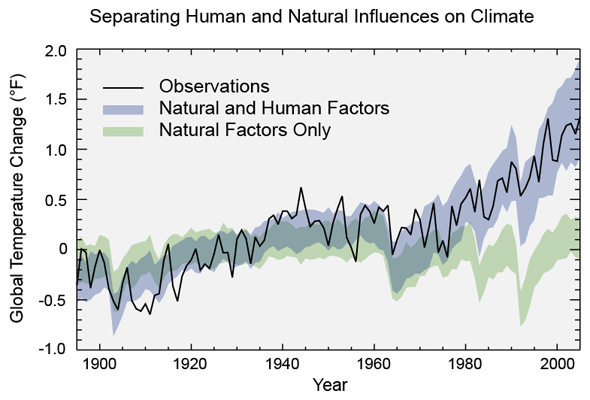 You Are Here: Home » Blog » Editors' Choice » A New Normal

Climate Change Is Happening. How Much Worse It Gets Is Up To Us.

Yesterday we previewed the release of the third installment of the National Climate Assessment — the massive, periodic report on the science of climate change and its coming impacts in the United States. Congress passed and President George H.W. Bush signed the law mandating periodic assessments. The assessment was authored by 300 climate scientists and experts, and reviewed by the National Academy of Sciences.

Today, the report was released and the findings are grim. “Climate change is happening now. It’s not something in the future,” said Dr. Don Wuebbles, coordinating lead author of the report and University of Illinois atmospheric scientist. “It’s happening now, it’s actually happening quite rapidly … and the evidence clearly points to the reason we’re getting these changes is because of human activity, particularly the burning of fossil fuels.”

We’ve gone through the report (which has a very accessible and interactive web site) and media coverage of it to bring you three major scientific conclusions.

In the report, the authors are subdued in stating that the evidence for man-made climate change “continues to strengthen.” Given the fact that they are as sure of the fact that human causes of climate change as they are that cigarettes cause lung and heart disease, there’s not much more room for confidence. Natural factors may play some role, but the dramatic rise in global temperatures are predominantly due to human factors. The chart below from the Assessment demonstrates this:

2. The effects of climate change are here and occurring all around us.

“Once considered an issue for a distant future,” the report says, climate change “has moved firmly into the present.” It then goes on to break down in great detail the destructive impacts that climate change is already having in the various regions of the United States. The table below offers a summary of the observed and projected regional impacts, which are all too familiar:

These changes and the increasing damages they cause have huge economic consequences — to say nothing of the loss of life. A Center for American Progress analysis estimated that from 2011 to 2013 alone, the 34 most destructive weather events cost the United States $208 billion.

And that’s a big reason why the National Climate Assessment is so important: shining a light on the reality of climate change altering so much of our day-to-day lives. Climate change “interacts with, and in many cases exacerbates, the concerns we already have — concerns about the economy, concerns about the health of our children, about immigration, social justice, national security,” said Dr. Katharine Hayhoe, a Texas Tech University climate scientist and lead author of the report. “And that’s why we care about it, not because it’s some brand new issue that we add to the bottom of our list.”

Indeed, no matter what the Republican climate deniers in Congress keep saying, we need to take big steps to reduce the carbon pollution our nation produces.

Climate Progress’s Joe Romm puts it another way: “The time to act was a long time ago when we were first warned by climate scientists, but continued inaction in the face of the vindication of those scientists and even graver warnings today, is beyond immoral.”

On June 2, the Environmental Protection Agency will likely propose its draft plan to limit carbon pollution from power plants – our largest domestic pollution source — which is an essential step. Rejecting the Keystone XL pipeline is another. And there are many more possibilities. Certainly having more members of the legislative branch who trust science would help.

BOTTOM LINE: The new National Climate Assessment has detailed the significant impacts climate change has on America, and warns that future impacts of climate change are “now unavoidable.” We have to adjust to a new normal that we created. It’s up to us how much worse it will get.