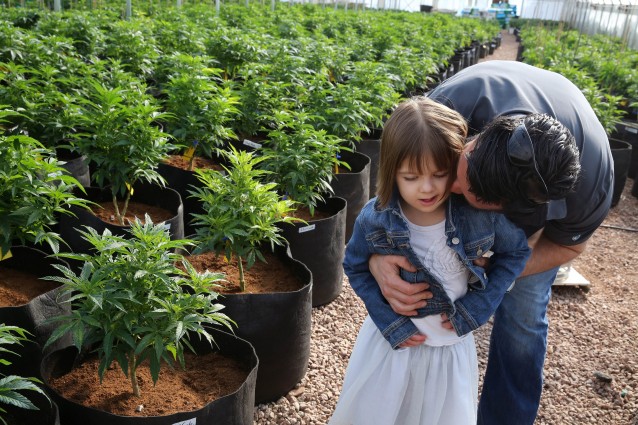 You Are Here: Home » Blog » Initiative Posts » War on the “War on Drugs” Posts » Almost Every Lawmaker In Florida Supports Medical Marijuana Bill, Even Rick Scott

Matt Figi with his once severely-ill 7-year-old daughter Charlotte, as they wander around inside a greenhouse for a special strain of medical marijuana known as Charlotte’s Web, named for the girl in her early treatment,CREDIT: AP Photo/Brennan Linsley

Just a few months ago, Florida Republican leaders were backing a legal challenge to oppose a medical marijuana ballot initiative in the state, saying it would lead to the “Coloradoification” of the state. Even as many Democrats came out in favor of medical marijuana with a question on the ballot this November that many said could shift the outcome of the election, Gov. Rick Scott (R) said he would oppose it.

But this week, the Florida House took a remarkable 111-7 vote to pass a more limited medical marijuana bill, and even Gov. Scott said he would sign it. The Senate passed the bill 63-3 the first time around, and passed a second version Friday, sending the bill to Scott. The bill does much less than a medical marijuana ballot initiative that will go before voters in November. It authorizes the use of marijuana low in the psychoactive component, THC, for cancer patients and those with severe epilepsy or other seizure conditions, including children with the consent of a second physician.

The bill has been dubbed the “Charlotte’s Web” bill, after a strain of marijuana that gave remarkable relief to then-six-year-old Charlotte Figi, featured in a CNN documentary. While Florida’s bill would limit the use of marijuana for many other conditions and allow only a few dispensaries in a state that is hundreds of miles across, it goes further than many other state bills in giving children access to treatment, and allowing those kids to take the marijuana in oil form, which other state officials have aimed to prohibit. In fact, the limits on access to the “Charlotte’s Web” strain in other states has driven more than 100 families to move to Colorado to treat their children.

Before passing the bill and sending it back to the Senate, the House added several amendments that prompted renewed debate on the Senate floor Friday. One would add criminal penalties for doctors who recommend a medical marijuana card for conditions other than seizures or cancer, or for patients who lie about their conditions. Another provision that prompted debate on the Senate floor would have permitted only nurseries with 30 years’ experience to grow marijuana, and must be authorized to cultivate a high volume of plants.

Despite these significant limits, the near-unanimous support for this bill reflects the a new consensus among politicians that at least some compassionate allowance for medical marijuana is non-controversial. In saying he would sign the bill, Gov. Scott said, “I’m a parent and a grandparent. I want to make sure my children, my grandchildren have access to the health care they want.”

Nonetheless, those who support the bill may also be aiming to pick off supporters for the November ballot initiative, which would allow medical marijuana for any “debilitating conditions,” would create a regulatory system for dispensaries with limiting the number, and would authorize more strains of marijuana than just the low-THC variety that is known to have a particular benefit for seizures, but not necessarily other conditions. Polls found that support for medical marijuana in Florida is as high as 82 percent, prompting many to worry that the medical marijuana ballot initiative could tilt the November gubernatorial election.