Black Americans are deeply pessimistic about the country under Trump, whom more than 8 in 10 describe as ‘a racist,’ Post-Ipsos poll finds

You Are Here: Home » Editors' Choice » Black Americans are deeply pessimistic about the country under Trump, whom more than 8 in 10 describe as ‘a racist,’ Post-Ipsos poll finds 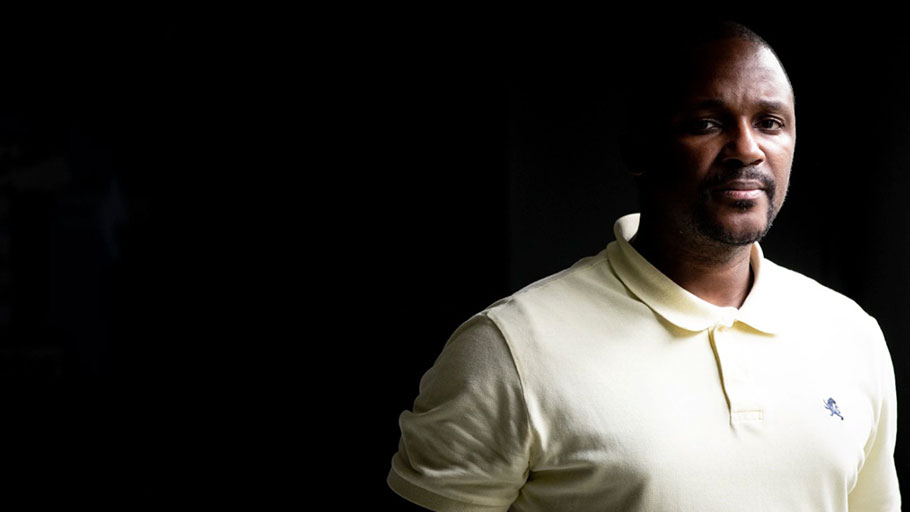 President Trump made a stark appeal to black Americans during the 2016 election when he asked, “What have you got to lose?” Three years later, black Americans have rendered their verdict on his presidency with a deeply pessimistic assessment of their place in the United States under a leader seen by an overwhelming majority as racist.

The findings come from a Washington Post-Ipsos poll of African Americans nationwide, which reveals fears about whether their children will have a fair shot to succeed and a belief that white Americans don’t fully appreciate the discrimination that black people experience.

While personally optimistic about their own lives, black Americans today offer a bleaker view about their community as a whole. They also express determination to try to limit Trump to a single term in office.

More than 8 in 10 black Americans say they believe Trump is a racist and that he has made racism a bigger problem in the country. Nine in 10 disapprove of his job performance overall.

The pessimism goes well beyond assessments of the president. A 65 percent majority of African Americans say it is a “bad time” to be a black person in America. That view is widely shared by clear majorities of black adults across income, generational and political lines. By contrast, 77 percent of black Americans say it is a “good time” to be a white person, with a wide majority saying white people don’t understand the discrimination faced by black Americans. 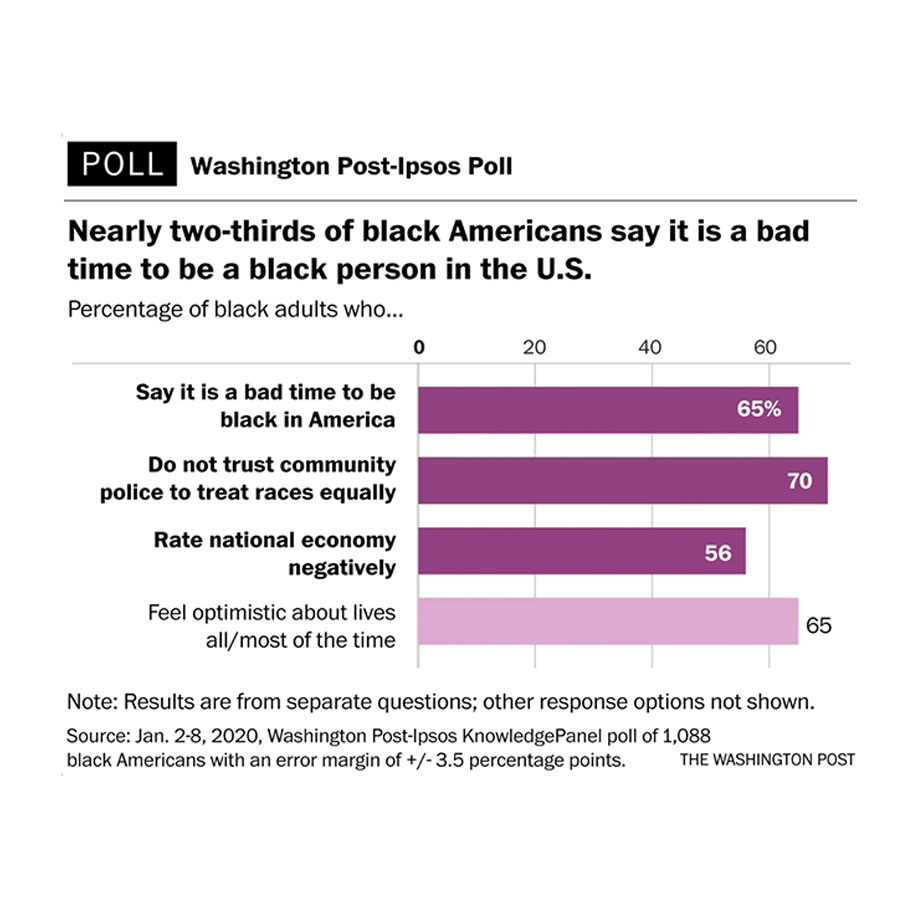 Courtney Tate, a 40-year-old elementary school teacher in Irving, Tex., outside Dallas, said that since Trump was elected, he’s been having more conversations with his co-workers — discussions that are simultaneously enlightening and exhausting — about racial issues he and his students face every day.

“As a black person, you’ve always seen all the racism, the microaggressions. But as white people, they don’t understand this is how things are going for me,” said Tate, who said he is the only black male teacher in his school. “They don’t live those experiences. They don’t live in those neighborhoods. They moved out. It’s so easy to be white and oblivious in this country.”

Francine Cartwright, a 44-year-old mother of three from Moorestown, N.J., said the ascent of Trump has altered the way she thinks about the white people in her life.

“If I’m in a room with white women, I know that 50 percent of them voted for Trump and they believe in his ideas,” said Cartwright, a university researcher. “I look at them and think, ‘How do you see me? What is my humanity to you?’ ”

A grassroots campaign in Milwaukee is working to get African-Americans more involved in the political process. It could help turn Wisconsin blue again. (Ray Whitehouse/The Washington Post)

The president routinely talks about how a steadily growing economy and historically low unemployment have resulted in more African Americans with jobs and the lowest jobless rate for black Americans recorded. Months ago, he said, “What I’ve done for African Americans in two and a half years, no president has been able to do anything like it.”

Those factors have not translated positively for the president. A 77 percent majority of black Americans say Trump deserves “only some” or “hardly any” credit for the 5.5 percent unemployment rate among black adults, compared with 20 percent who say Trump deserves significant credit.

In follow-up interviews, many said former president Barack Obama deserves more credit for the improvement in the unemployment rate, which declined from a high of 16.8 percent in 2010 to 7.5 percent when he left office.

Others said their personal financial situation is more a product of their own efforts than anything the president has done.

“I don’t think [Trump] has anything to do with unemployment among African Americans,” said Ethel Smith, a 72-year-old nanny who lives in Lithonia, Ga., a suburb of Atlanta. “I’ve always been a working poor person. That’s just who I am.” 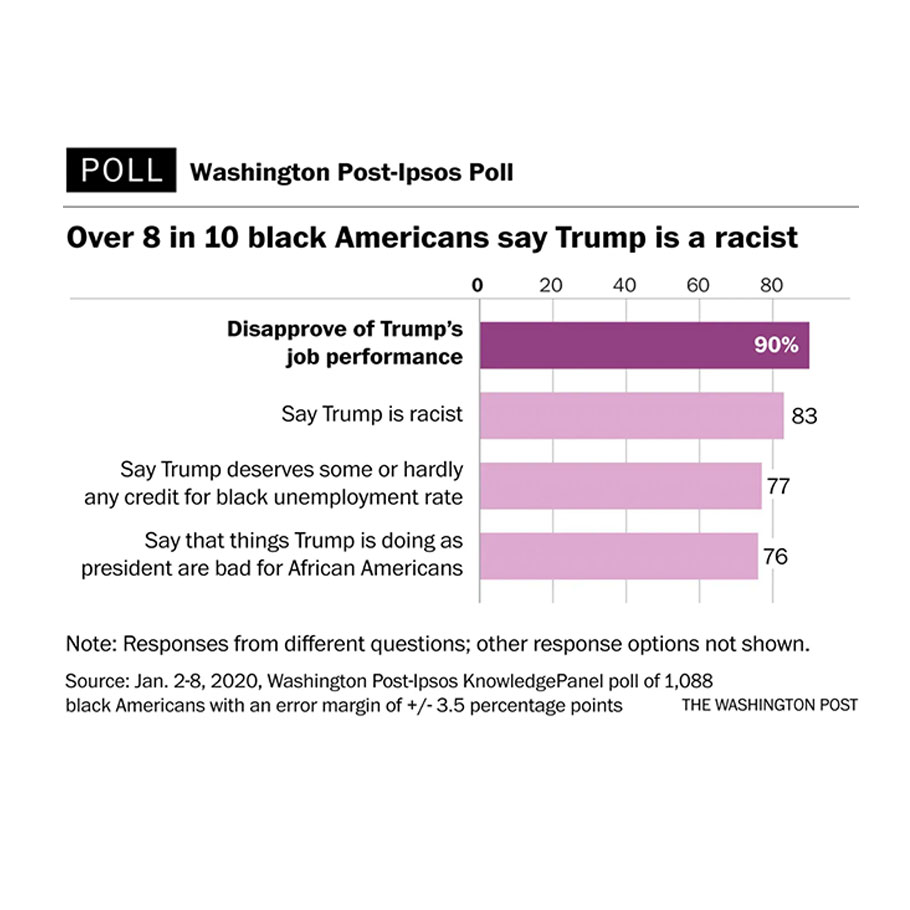 A similar 56 percent majority of African Americans rate the national economy as “not so good” or “poor,” contrasting with other surveys that find most Americans overall rate the economy positively, although there are sharp political divides on this question.

Beyond questions about the economy, African Americans see a range of concerns impacting the country overall as well as their own communities.

Just 16 percent of black Americans believe that most black children born in the United States today have “a good opportunity to achieve a comfortable standard of living.” A 75 percent majority think most white children have such an opportunity. 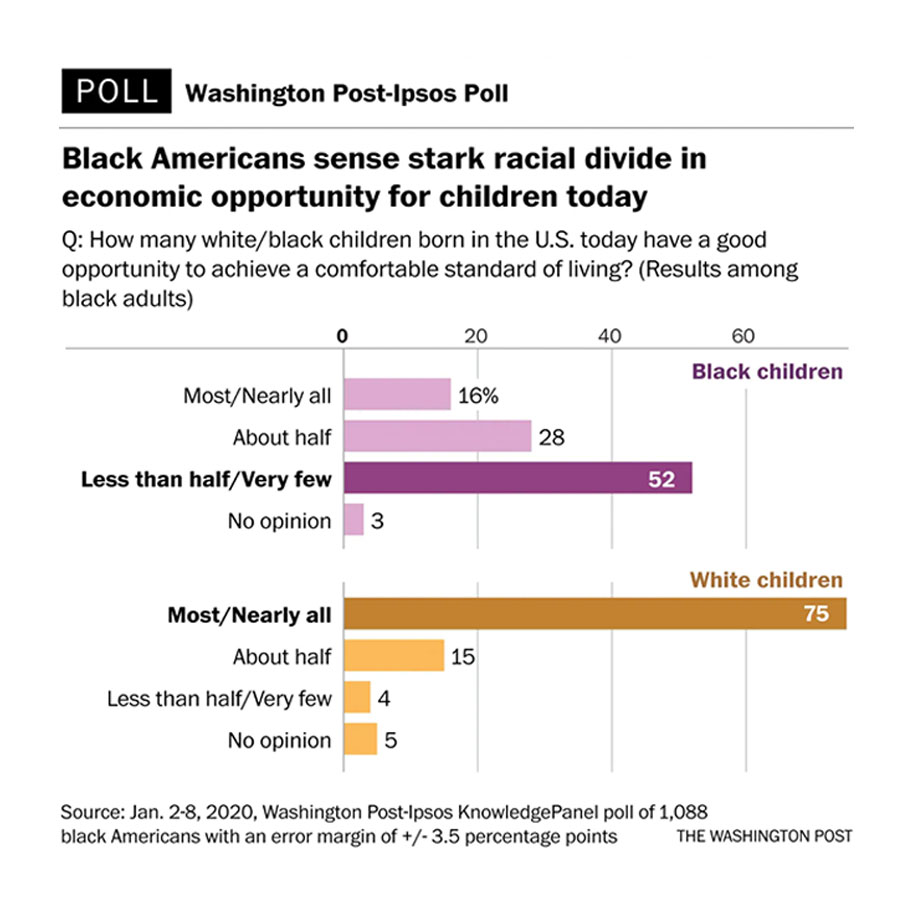 Yet the Post-Ipsos poll also finds that 65 percent of black Americans say they feel optimistic about their own lives most or all of the time. This positive personal outlook crosses age and political groups. While it peaks among those who are older and with higher incomes, roughly half of black Americans with incomes under $35,000 annually say they feel optimistic about their lives.

Dana Clark, a father of 11 in Ontario, Calif., said he tells all of his children that it’s possible to succeed in America, but that they’ll have to work harder than the white children they encounter.

“I tell them we’re going to set this plan up. Whatever you want to do, you’re going to be able to do it,” he said. “But it ain’t going to be easy, especially if [you] want to make some money because you’re going to be in a world where they’re not going to expect you to be there. You can get what you want, but you’ve got to work harder, faster and stronger.”

The survey, by The Post and Ipsos, a nonpartisan research firm, is one of the most extensive recent surveys focused on views of the country and Trump among black Americans, who are often represented by only small samples in customary national polls. It was conducted among 1,088 non-Hispanic black adults, including 900 registered voters, drawn from a large online survey panel recruited through random sampling of U.S. households.

Few black voters responded positively to Trump’s campaign appeal for their votes. Exit polls taken during the 2016 election showed just 8 percent of African Americans supported Trump and 89 percent backed Democratic nominee Hillary Clinton, although black turnout was significantly lower than in 2008 and 2012 for the election and reelection of Obama, the country’s first black president. 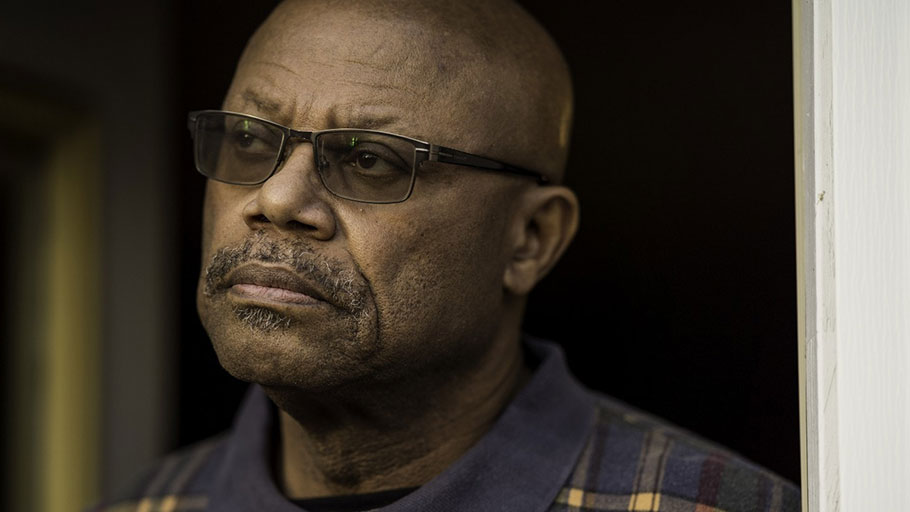 In the Post-Ipsos poll, roughly three-quarters of black adults say the things that Trump is doing as president are “bad for African Americans,” while a similar majority says Obama’s actions as president were good.

Kenneth Davis, a truck driver who lives outside Detroit, said that when Trump was elected, co-workers who secretly harbored racist thoughts felt emboldened to publicly express them.

“One gentleman is waving the Confederate flag on the back of his pickup truck,” said Davis, 48, who is a Marine Corps veteran. “He was very brave to say, ‘Trump’s president, I’m going to get my window [painted].’ ”

Retired federal prison Warden Keith Battle said the political climate has exposed “unresolved racial issues” and that Trump has emboldened white supremacists. Battle, who lives in Wake Forest, N.C., said white supremacists “are not the majority of whites in America, but there is a significant amount still, I’d say 30 percent, and I think they’re just leading the country down a path of, eventually, chaos. They’re feeling jeopardized of losing their white privilege.”

Survey respondents were asked to say how Trump’s presidency has affected them personally or African Americans in general. The responses illuminated the data in the poll.

“Donald Trump has not done anything for the African American people,” said one person.

“He has created an atmosphere of division and overt racism and fear of immigrants unseen in many years,” said another.

A third said, “He has taken hatred against people of color, in general, from the closet to the front porch.”

Others echoed that sentiment, saying that the president has emboldened those with racially prejudiced views and therefore set back race relations for years. “I sense a separation between myself and some of my white associates,” one person wrote.

Similarly large majorities of black men and women disapprove of Trump, as do black Americansacross different age, education and income levels. Trump receives somewhat higher marks among self-identifiedblack conservatives, with 25 percent approving of his performance, compared with 5 percent of moderates and 3 percent among liberals.

Few black Americans appear open to supporting Trump’s bid for reelection at this point. He receives between 4 and 5 percent support among black registered voters in head-to-head matchups against eight potential Democratic nominees. But the level of Democratic support depends on who is the party’s nominee, peaking at 82 percent for former vice presidentJoe Biden and falling to 57 percent for former South Bend, Ind., mayor Pete Buttigieg.

The Post-Ipsos survey was conducted Jan. 2-8 through Ipsos’s KnowledgePanel, a large online survey panel recruited through random sampling of U.S. households. Overall results have a margin of sampling error of plus or minus 3.5 percentage points among the sample of 1,088 black adults overall and four points among the sample of 900 registered voters.

Emily Guskin contributed to this report.

Cleve R. Wootson Jr. is a national political reporter for The Washington Post, covering the 2020 campaign for president. He previously worked on The Post’s General Assignment team. Before that, he was a reporter for the Charlotte Observer.

Vanessa Williams is a reporter on the National desk.

Scott Clement is the polling director for The Washington Post, conducting national and local polls about politics, elections and social issues. He began his career with the ABC News Polling Unit and came to The Post in 2011 after conducting surveys with the Pew Research Center’s Religion and Public Life Project.