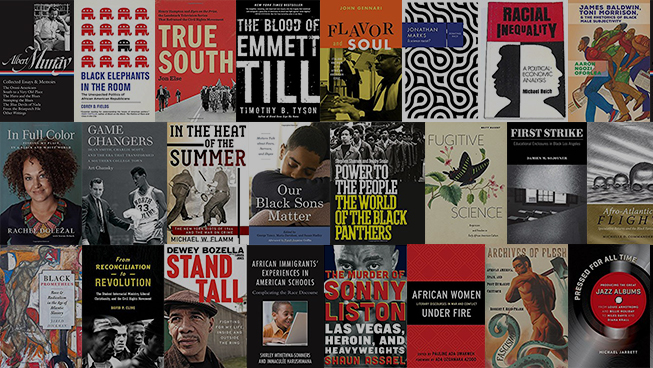 •  Are Racists Crazy? How Prejudice, Racism, and Antisemitism Became Markers of Insanity by Sander L. Gilman and James M. Thomas (New York University Press; 384 pages; $35). Describes the pathologizing of both race and racism, beginning in the mid-19th century with the attribution of certain qualities to Jews, blacks, the Irish, and American Indians, and later the attribution of madness to racists.

•  Before Jackie Robinson: The Transcendent Role of Black Sporting Pioneers edited by Gerald R. Gems (University of Nebraska Press; 313 pages; $35). Writings on such figures as the jockey Isaac Murphy, the golfer Teddy Rhodes, the aviator Bessie Coleman, and the track star Tidye Pickett.

•  Beyond Expectations: Second-Generation Nigerians in the United States and Britain by Onoso Imoagene (University of California Press; 298 pages; $85 hardcover, $29.95 paperback). A comparative study of how race, class, and ethnicity shape identity for second-generation Nigerian adults in both settings.

•  Blake; or, The Huts of America: A Corrected Edition by Martin R. Delany, edited by Jerome McGann (Harvard University Press; 332 pages; $19.95). Corrected, scholarly edition of a novel by an African-American writer born in 1812 to a free mother and enslaved father; the work, originally published in serial form in 1859, depicts the escape of Henry Blake from a Southern plantation, his travels in the United States, Canada, Africa, and Cuba, and his struggle to unite blacks, free and enslaved, in resistance.

•  The British and Foreign Anti-Slavery Society, 1838-1956: A History by James Heartfield (Oxford University Press; 486 pages; $65). Traces the history of the BFAS as its focus shifted from slavery in the Americas to colonialism in Africa.

•  Children as Caregivers: The Global Fight Against Tuberculosis and HIV in Zambia by Jean Hunleth (Rutgers University Press; 194 pages; $95 hardcover, $34.95 paperback). Focuses on TB in a study of children as caregivers for guardians in George, a community on the margins of Zambia’s capital, Lusaka.

•  Gender, Justice, and the Problem of Culture: From Customary Law to Human Rights in Tanzania by Dorothy L. Hodgson (Indiana University Press; 187 pages; $80 hardcover, $30 paperback). Draws on fieldwork among Maasai pastoralists in a study of the impact of multiple legal institutions in Tanzania, with particular attention to women.

•  A History of Borno: Trans-Saharan African Empire to Failing Nigerian State by Vincent Hiribarren (Hurst, distributed by Oxford University Press; 311 pages; $70). Examines the history and borders, since 1810, of a region in southeastern Nigeria that is now best-known as once the home base for the Islamist militants Boko Haram.

•  Hollywood’s Hawaii: Race, Nation, and War by Dela Malia Caparoso Konzett (Rutgers University Press; 253 pages; $95 hardcover, $27.95 paperback). A study of cinematic depictions of Hawaii since 1898 and the ways in which film has reflected the islands’ colonization, militarization, racial segregation, plantation culture, and tourism.

•  Hopes and Expectations: The Origins of the Black Middle Class in Hartford by Barbara J. Beeching (State University of New York Press; 270 pages; $90). Draws on more than 200 letters from the 1860s in a study of three African-Americans with ties to the Connecticut city—Rebecca Primus, a schoolteacher on Maryland’s Eastern Shore, her brother Nelson Primus, an artist in Boston, and Addie Brown, a friend of Rebecca’s working as a domestic in Hartford.

•  In Search of Silence: The Journals of Samuel R. Delany, Volume I, 1957-1969 edited by Kenneth R. James (Wesleyan University Press, distributed by University Press of New England; 720 pages; $40). Annotated edition of the novelist and critic’s private journals, beginning when he was in high school and ending on the eve of reconceiving Dhalgren.

•  Ivory: Power and Poaching in Africa by Keith Somerville (Hurst, distributed by Oxford University Press; 390 pages; $29.95). Traces the history of African trade in elephant tusks over the centuries and argues that the only way to stem uncontrolled poaching may be regulation not prohibition.

•  Jazz and Cocktails: Rethinking Race and the Sound of Film Noir by Jans B. Wager (University of Texas Press; 163 pages; $85 hardcover, $24.95 paperback). Examines the varied functions of jazz in film noir, with discussion of such composers as Miles Davis, Duke Ellington, Billy Strayhorn, Chico Hamilton, and John Lewis.

•  Jihad in West Africa during the Age of Revolutions by Paul E. Lovejoy (Ohio University Press; 432 pages; $90 hardcover, $34.95 paperback). A study of political change in the region from the late 18th to the mid-19th centuries; topics include the expansion of slavery in the Muslim states of the Sokoto Caliphate, Fuuta Jalon, and Fuuta Toro.

•  Masculinities and Markets: Raced and Gendered Urban Politics in Milwaukee by Brenda Parker (University of Georgia Press; 256 pages; $84.95 hardcover, $29.95 paperback). Topics include how the city’s development policies have strengthened existing hierarchies of gender, as well as class and race.

•  Monuments to Absence: Cherokee Removal and the Contest over Southern Memory by Andrew Denson (University of North Carolina Press; 304 pages; $85 hardcover, $29.95 paperback). Discusses monuments and other memorials to the forced removal of the Cherokee.

•  The New Eugenics: Selective Breeding in an Era of Reproductive Technologies by Judith Daar (Yale University Press; 265 pages; $40). Finds an echo of eugenics in barriers that block certain people’s access to reproductive technologies because of biases linked to class, race, and marital status.

•  Patterns in Circulation: Cloth, Gender, and Materiality in West Africa by Nina Sylvanus (University of Chicago Press; 210 pages; $90 hardcover, $30 paperback). Draws on fieldwork in Lome, Togo’s capital, in a study of Togolese women and production and trade in wax-print cloth.

•  The Pinkster King and the King of Kongo: The Forgotten History of America’s Dutch-Owned Slaves by Jeroen Dewulf (University Press of Mississippi; 320 pages; $65). A study of Dutch-owned slaves and Dutch-speaking free blacks from 17th-century New Amsterdam to what became New York and New Jersey.

•  The Politics of the Second Slavery edited by Dale W. Tomich (State University of New York Press; 267 pages; $85). Writings on political dimensions of what has been termed the “second slavery,” or the remaking of Atlantic slavery as part of the expansion of the capitalist world economy in the early 19th century; focuses on the Cuban sugar zone, the Brazilian coffee zone, and the U.S. plantation South.

•  Recaptured Africans: Surviving Slave Ships, Detention, and Dislocation in the Final Years of the Slave Trade by Sharla M. Fett (University of North Carolina Press; 290 pages; $35). Discusses Africans seized by U.S. authorities from four illegal slaveships, the Echo, Wildfire, William, and Bogota, in 1858 and 1860, held in federal camps, and shipped to Liberia.

•  The Rise of the Arab American Left: Activists, Allies, and Their Fight against Imperialism and Racism, 1960s–1980s by Pamela E. Pennock (University of North Carolina Press; 328 pages; $85 hardcover, $29.95 paperback). Combines archival and interview sources in a study of Arab-American activism, particularly in the wake of the 1967 Arab-Israeli war.

•  Romaphobia: The Last Acceptable Form of Racism by Aidan McGarry (Zed Books, distributed by University of Chicago Press; 224 pages; $95 hardcover, $29.95 paperback). Examines the origins of discrimination against the Roma in the early history of the European nation state; considers ways to further inclusion.

•  Simplicity, Equality, and Slavery: An Archaeology of Quakerism in the British Virgin Islands, 1740-1780 by John M. Chenoweth (University Press of Florida; 244 pages; $74.95). Combines archival and archaeological approaches in a study of a short-lived Quaker-inspired planter community and its efforts to navigate the contradictions of its religious ideals and its slave ownership.

•  Suspect Freedoms: The Racial and Sexual Politics of Cubanidad in New York, 1823-1957 by Nancy Raquel Mirabal (New York University Press; 311 pages; $89 hardcover, $30 paperback). A study of the exiles and migrants of the Cuban diaspora in the city.

•  US Latinization: Education and the New Latino South edited by Spencer Salas and Pedro R. Portes (State University of New York Press; 289 pages; $90). Writings on the educational implications of the growth of the Latino population, with a focus on the South; topics include parental and family engagement.

•  Vanishing America: Species Extinction, Racial Peril, and the Origins of Conservation by Miles A. Powell (Harvard University Press; 251 pages; $39.95). Examines the early conservation movement’s ties to eugenics, immigration restrictions, and population control as leaders linked the preservation of wilderness to the preservation of the nation’s “Nordic” and “Anglo-Saxon” races.

•  The Vanishing Middle Class: Prejudice and Power in a Dual Economy by Peter Temin (MIT Press; 256 pages; $26.95). Topics include how politicians appeal to the racial beliefs of poor white voters to promote policies that hurt low-income people in general.

•  When Police Kill by Franklin E. Zimring (Harvard University Press; 320 pages; $35). Uses data from 2015 to examine how, when, where, and why police resort to lethal force; proposes ways of reducing such incidents while protecting the lives of officers.

•  When Riot Cops Are Not Enough: The Policing and Repression of Occupy Oakland by Mike King (Rutgers University Press; 246 pages; $95 hardcover, $29.95 paperback). Combines scholarly and activist perspectives in a study of physical, legal, political, and ideological aspects of responses to protesters in the Bay Area city from the fall of 2011 through the spring of 2012.

•  Who Owns Haiti? People, Power, and Sovereignty edited by Robert Maguire and Scott Freeman (University Press of Florida; 184 pages; $79.95). Writings on Haitian sovereignty in the face of external actors and pressures, from NGOs to military intervention.