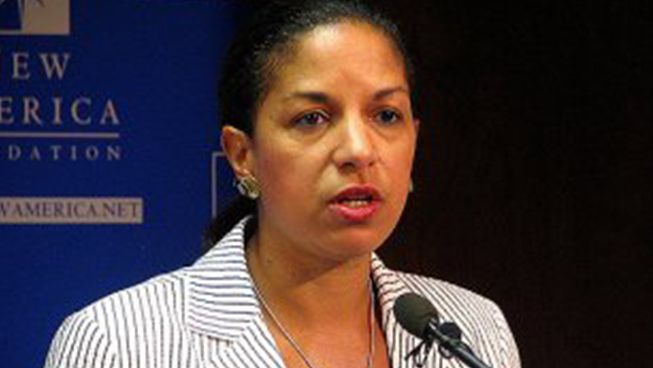 A pattern is emerging in the administration’s scandal-defense playbook: Go after black women.

It’s no secret that a toxic combination of misogyny and racism helped Donald J. Trump win the presidency. Never mind dog whistles and code—Trump proudly displayed his contempt for women and non-white people throughout his campaign. But another likely helper to that victory was one whose involvement Trump and his allies would prefer to have kept under wraps: the government of Russia, a U.S. adversary.

Bubbling for months, the story of Russian meddling in the 2016 presidential campaign on Trump’s behalf caught fire when, on March 20, FBI Director James Comey announced in his open-session appearance before the House Intelligence Committee that members of the Trump campaign and other Trump associates were under investigation in the matter. Apparent collusion between the Trump administration and House Intelligence Committee Chairman Devin Nunes to concoct a counter-story that alleges spying by the Obama administration on Trump campaign personnel immediately followed.

Fox News Channel, the president’s favorite news source, likewise became the nation’s most-watched cable television news outlet by selling a toxic brew of misogyny and racism. That the institution gave license to serial sexual harassment by two of its most powerful leaders—current program host Bill O’Reilly and former news chief Roger Ailes—is not debatable, especially given revelations of $13 million paid in settlements to women who claimed sexual harassment by O’Reilly in an April 1 exposé published by The New York Times. Under fire by the National Organization for Women and Color of Change, The O’Reilly Factor, Fox News’s top-rated show, is bleeding advertisers. At this writing, 22 major sponsors of the program have jumped ship.

Like Trump voters, O’Reilly’s viewers are unlikely to be turned off by allegations that, under the guise of mentorship, O’Reilly propositioned women at Fox and took vengeance when rebuffed, all in a corporate culture in which women felt threatened into silence about their experience. After all, misogyny at Fox News is a feature of the brand. The tone was set by Ailes himself, who, after resigning from the network in the wake of multiple sexual harassment allegations waged against him, became an informal adviser to the Trump campaign. Fox paid a $20 million settlement to former Fox & Friends co-host Gretchen Carlson for harassment she said Ailes conducted against her.

As O’Reilly’s advertisers flee and Trump’s poll numbers plummet, each are seeking to stoke the energies of their fans the best way they know how: through the vilification of black women. In the Trump-Fox axis, all women are suspect, of course, but black women are even more so. There’s a special focus on the demonization of African American women in the political and media spheres.

Recent weeks have brought us the spectacle of White House Press Secretary Sean Spicer treating April Ryan, a reporter for American Urban Radio Networks, like a child, demanding at a press briefing that she not shake her head after she asked a question about the Russia scandal and the president’s sinking poll numbers. We saw O’Reilly mock U.S. Representative Maxine Waters’s hair style in a racialized way. We saw Fox News reporter Heather Childers misrepresent an appeal by former Attorney General Loretta Lynch—who called for resistance to Trump’s rollback of civil protections by citing the sacrifices made by civil rights protesters in decades past, including being on the receiving end of beatings and murder—as a call to violence. (Fact-checkers saw it differently.)

Tee up one of the right’s favorite villains: Susan Rice, Obama’s national security adviser. Ever since Trump, on March 4, alleged in a tweet that Barack Obama had “‘wiretapped’” his phones in Trump Tower during the presidential campaign, the White House and right-wing media have gone to great lengths to try to prove the claim. Because Rice had asked for the names of certain “U.S. persons” that NSA surveillance on foreign nationals had revealed them to be talking to—at a moment when the intelligence community was examining the possibility of foreign intervention in the presidential campaign—she is now said to have been spying on the Trump campaign, according to an April 4 report on The Daily Caller, the right-wing website helmed by Tucker Carlson. At issue is the reason she asked the names of certain U.S. persons to be “unmasked” to her, in the parlance of intelligence types.

Rice is perfect for the role for which she’s been drafted without consent. She’s a woman. She’s black. A black woman who, like Ryan and Lynch, has risen to the upper reaches of her profession. The worst kind of woman in their eyes.

When Republicans sought to paint the September 11, 2012, assault on the U.S. consulate in Benghazi, Libya, as a disaster summoned by then-Secretary of State Hillary Clinton and covered up by Obama administration figures, Susan Rice became a favorite target of scandal-mongers for having said on political talk shows the following Sunday that the attack on the consulate appeared to be part of a rash of protests in the Muslim world against the United States for the posting of a provocative anti-Muslim video on YouTube. Her talking points were at odds with what Libyan officials were saying. It turned out that the attack was a premeditated operation by the group Ansar al-Sharia.

Once the course of events and the terrorists behind them became more clear, Rice was deemed by Republicans to be crafting some kind of cover-up for the secretary of state, whom they expected to run for president in 2016. This led to a multi-year investigation led by Representative Trey Gowdy of South Carolina, for which the American taxpayer had shelled out $7 million by June 2016, with precious little to show for it in terms of evidence of malpractice or malfeasance on the part of the administration. What the investigation did accomplish, though, was the revival of a longstanding conservative narrative about Hillary Clinton that sows doubt about her trustworthiness. Just in time for the election. Go figure.

Trump quickly piled on, retweeting The Drudge Report’s link to The Daily Callerpiece, which was offered in a Drudge tweet that reads: “RICE ORDERED SPY DOCS ON TRUMP?”

For his part, as his advertisers abandoned him, O’Reilly served up a piece on last night’s show that offered a noxious comment about Rice’s interview that same day with MSNBC’s Andrea Mitchell. O’Reilly played a clip from the interview when Rice responded to a question about whether she leaked the name of former National Security Adviser Michael Flynn to the press as one of those unmasked participants in phone calls with surveillance targets, by slipping into vernacular. “I leaked nothing to nobody,” Rice said.

O’Reilly played the clip and stopped it after that comment. “‘Nothing to nobody,’” O’Reilly said, “should be ‘nothing to anyone.’” As he corrects Rice’s grammar, text next to his head on the screen reads: “‘Nothing to nobody’? Interesting phrase.”

Yeah, it’s an interesting phrase that sounds kinda black to white ears. What else do O’Reilly fans need to know about the situation?

“Lyin’, leakin’”? Interesting phrase. About a woman. A black woman.

Look at that, Scavino seems to be saying—not at the advertisers leaking away from Bill O’Reilly or the lies the president has told, claiming to have had “nothing to do” with Russia, when it’s clear he’s had some sweetheart business deals with people close to Russian President Vladimir Putin.

Sadly, the Trump-loving O’Reilly fan base will eat that stuff up. Because there’s nothing they hate more than a smart, black woman who was just doing her job.