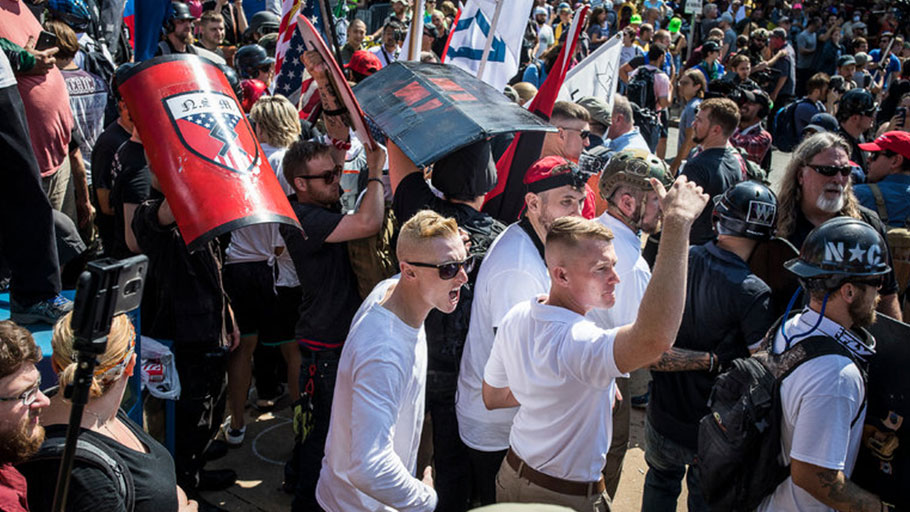 You Are Here: Home » Blog » Editors' Choice » Charlottesville and the Bigotocracy

The late, great Gore Vidal said that we live in “The United States of Amnesia.” Our fatal forgetfulness flares when white bigots come out of their closets, emboldened by the tacit cover they’re given by our president. We cannot pretend that the ugly bigotry unleashed in the streets of Charlottesville, Va., this weekend has nothing to do with the election of Donald Trump.

In attendance was white separatist David Duke, who declared that the alt-right unity fiasco “fulfills the promises of Donald Trump.” In the meantime, Mr. Trump responded by offering false equivalencies between white bigots and their protesters. His soft denunciations of hate ring hollow when he has white nationalist advisers like Steve Bannon and Stephen Miller whispering in his ear.

Such an ungainly assembly of white supremacists rides herd on political memory. Their resentment of the removal of public symbols of the Confederate past — the genesis of this weekend’s rally — is fueled by revisionist history. They fancy themselves the victims of the so-called politically correct assault on American democracy, a false narrative that helped propel Mr. Trump to victory. Each feeds on the same demented lies about race and justice that corrupt true democracy and erode real liberty. Together they constitute the repulsive resurgence of a virulent bigotocracy.

This bigotocracy overlooks fundamental facts about slavery in this country: that blacks were stolen from their African homeland to toil for no wages in American dirt. When black folk and others point that out, white bigots are aggrieved. They are especially offended when it is argued that slavery changed clothes during Reconstruction and got dressed up as freedom, only to keep menacing black folk as it did during Jim Crow. The bigotocracy is angry that slavery is seen as this nation’s original sin. And yet they remain depressingly and purposefully ignorant of what slavery was, how it happened, what it did to us, how it shaped race and the air and space between white and black folk, and the life and arc of white and black cultures.

It is disheartening for black folk to see such a vile and despicable replay of history. Facing this unadorned hate tears open wounds from atrocities that we have confronted throughout our history. It is depressing to explain to our children that what we confronted as children may be the legacy they bequeath to their children as well.

It is more dispiriting still to realize that the government of our land, at least in the present administration, has shown little empathy toward victims of white bigotry, and indeed, has helped to spread the paralyzing virus of hatred, by turning a blind eye to what is done in their name.

Now is the time for every decent white American to prove he or she loves this country by actively speaking out against the scourge this bigotocracy represents. If such heinous behavior is met by white silence, it will only cement the perception that as long as most white folk are not immediately at risk, then all is relatively well. Yet nothing could be further from the truth, and nothing could more clearly declare the moral bankruptcy of our country.

Michael Eric Dyson is the author of “Tears We Cannot Stop: A Sermon to White America” and a contributing opinion writer.