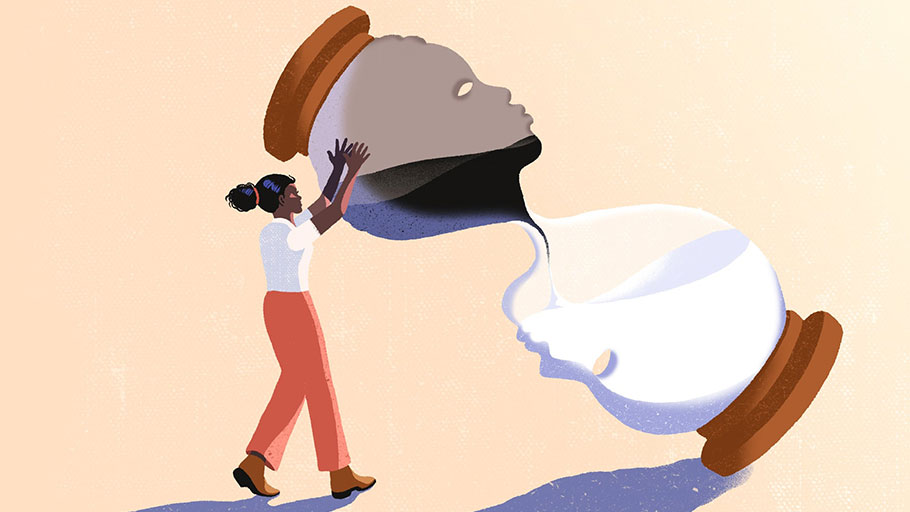 You Are Here: Home » Blog » Editors' Choice » Confronting racism is not about the needs and feelings of white people

If your anti-racism work prioritizes the ‘growth’ and ‘enlightenment’ of white America over the dignity and humanity of people of color – it’s not anti-racism work. It’s white supremacy.’ Illustration: Mikyung Lee for Guardian US

By Ijeoma Oluo, The Guardian —

I was leaving a corporate office building after a full day of leading workshops on how to talk about race thoughtfully and deliberately. The audience for each session had been similar to the dozens I had faced before. There was an overrepresentation of employees of color, an underrepresentation of white employees. The participants of color tended to make eye contact with me and nod – I even heard a few “Amens” – but were never the first to raise their hands with questions or comments. Meanwhile, there was always a white man eager to share his thoughts on race. In these sessions I typically rely on silent feedback from participants of color to make sure I am on the right track, while trying to moderate the loud centering of whiteness.

In the hallway an Asian American woman locked eyes with me and mouthed: “Thank you.” A black man squeezed my shoulder and muttered: “Girl, if you only knew.” A black woman stopped me, looked around cautiously to make sure no one was within earshot, and then said: “You spoke the truth. I wish I could have shared my story so you’d know how true. But this was not the place.”

As I stood there, gazing off into the memory of hundreds of stifled conversations about race, I was brought to attention by a white woman. She was not nervously looking around to see who might be listening. She didn’t ask if I had time to talk, though I was standing at the door.

“Your session was really nice,” she started. “You said a lot of good things that will be useful to a lot of people.”

She paused briefly: “But the thing is, nothing you talked about today is going to help me make more black friends.”

I was reminded of one of the very first panels on race I had participated in. A black man in Seattle had been pepper-sprayed by a security guard for doing nothing more than walking through a shopping center. It had been caught on camera. A group of black writers and activists, myself included, were onstage in front of a majority-white Seattle audience, talking about the incident. Fellow panelist Charles Mudede, a brilliant writer, film-maker and economic theorist, addressed the economic mechanisms at work: this security guard had been told that his job was to protect his employers’ ability to make a profit. He had been told that his job was to keep customers who had money to spend happy and safe. And every day he was fed cultural messages about who had money and who didn’t. Who was violent and who wasn’t. Charles argued that the security guard had been doing his job. In a white supremacist capitalist system, this is what doing your job looked like.

Just once I want to speak to a room of white people who
know they are there because they are the problem.

Well, at least he was trying to argue that point. Because halfway through, a white woman stood up and interrupted him.

“Look, I’m sure you know a lot about all this stuff,” she said, hands on hips. “But I didn’t come here for an economics lesson. I came here because I feel bad about what happened to this man and I want to know what to do.”

That room, apparently, wasn’t the place either. According to this woman, this talk was not, or should not have been, about the feelings of the man who was pepper-sprayed, or those of the broader black community, which had just been delivered even more evidence of how unsafe we are in our own city. She felt bad and wanted to stop feeling bad. And she expected us to provide that to her.

At a university last month, where I was discussing the whitewashing of publishing and the need for more unfiltered narratives by people of color, a white man insisted that there was no way we were going to be understood by white people if we couldn’t make ourselves more accessible. When I asked him if all of the elements of white culture that people of color have to familiarize themselves with just to get through the day are ever modified to suit us, he shrugged and looked down at his notebook. At a workshop I led last week a white woman wondered if perhaps people of color in America are too sensitive about race. How was she going to be able to learn if we were always getting so upset at her questions?

I’ve experienced similar interruptions and dismissals more times than I can count. Even when my name is on the poster, none of these places seem like the right places in which to talk about what I and so many people of color need to talk about. So often the white attendees have decided for themselves what will be discussed, what they will hear, what they will learn. And it is their space. All spaces are.

One day, in frustration, I posted this social media status:

“If your anti-racism work prioritizes the ‘growth’ and ‘enlightenment’ of white America over the safety, dignity and humanity of people of color – it’s not anti-racism work. It’s white supremacy.”

Is a little white supremacy leaked into our anti-racism
work better than no anti-racism work at all?

One of the very first responses I received from a white commenter was: “OK, but isn’t it better than nothing?”

Is it? Is a little erasure better than a lot of erasure? Is a little white supremacy leaked into our anti-racism work better than no anti-racism work at all? Every time I stand in front of an audience to address racial oppression in America, I know that I am facing a lot of white people who are in the room to feel less bad about racial discrimination and violence in the news, to score points, to let everyone know that they are not like the others, to make black friends. I know that I am speaking to a lot of white people who are certain they are not the problem because they are there.

Myself and many of the attendees of color often leave these talks feeling tired and disheartened, but I still show up and speak. I show up in the hopes that maybe, possibly, this talk will be the one that finally breaks through, or will bring me a step closer to the one that will. I show up and speak for people of color who can’t speak freely, so that they might feel seen and heard. I speak because there are people of color in the room who need to hear that they shouldn’t have to carry the burden of racial oppression, while those who benefit from that same oppression expect anti-racism efforts to meet their needs first. After my most recent talk, a black woman slipped me a note in which she had written that she would never be able to speak openly about the ways that racism was impacting her life, not without risking reprisals from white peers. “I will heal at home in silence,” she concluded.

Is it better than nothing? Or is the fact that in 2019 I still have to ask myself that question every day most harmful of all?