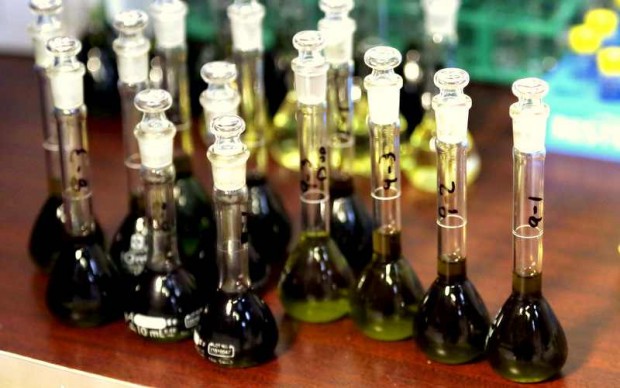 Editors' ChoiceNews & Current AffairsWar on the “War on Drugs” Posts

Congress asks the head of Health and Human Services to do away with an additional review process required only for those hoping to study marijuana’s medicinal effects.

Thirty members of Congress signed a letter to U.S. Department of Health and Human Services Secretary Sylvia Mathews Burwell on Tuesday, asking that she make the process of obtaining federally-grown marijuana for medicinal research less burdensome for U.S. scientists.

“Twenty-two states and the District of Columbia have passed laws allowing for the use of medical marijuana,” the letter said. “Over one million Americans currently use medical marijuana at the recommendation of their physician. There is overwhelming anecdotal evidence from patients, their family members, and their doctors of the therapeutic benefits of marijuana for those suffering from cancer, epilepsy, seizures, Post-Traumatic Stress Disorder, glaucoma, anxiety, chronic pain, and more.

“We believe the widespread use of medical marijuana should necessitate research into what specific relief it offers and how it can best be delivered for different people and different conditions. Yet, the scientific research clearly documenting these benefits has often been hampered by federal barriers.”

Since May 21, 1999, scientists interested in conducting research on marijuana’s medicinal values must undergo two review processes if their study is not funded by the National Institutes of Health. In addition to the review process that applies to other Schedule I substances such as LSD, psilocybin and MDMA, researchers must also complete an additional review process before they can be given access to marijuana grown in the United States by the federal government for research purposes.

According to the letter, spearheaded by Rep. Earl Blumenauer of Oregon, the additional review for marijuana research adds a layer of uncertainty for researchers and can lead to delays or even rejection of the research proposal, which is why the bipartisan-supported letter asks Burwell to help scientists determine the therapeutic risks and benefits of marijuana by removing the requirement that an additional review process occur for marijuana-related research.

“Considering the number of states with medical marijuana laws and the number of patients who use marijuana medicinally in the United States, it is clear that we need more scientific information about the therapeutic risks and benefits of marijuana,” the letter explained.

After it was announced that the letter had been issued to Secretary Burwell, many advocacy groups working to legalize medical marijuana declared their support for Congress’ latest push to help patients in the U.S., especially since medical marijuana laws now exist in 22 states and Washington, D.C., while laws allowing the use of cannabidiol oil have been enacted in eight states.

“There’s no reason the federal government should make it harder for scientists to study marijuana than it is to study any other drug, yet that’s exactly what it is doing,” said Dan Riffle, director of federal policies for the Marijuana Policy Project, in a media statement.

“Marijuana is less harmful than alcohol, but our federal government treats it like it’s plutonium. With marijuana prohibition coming to an end, our government should be promoting this type of research, not obstructing it.”

Brad Burge, director of communications and marketing for the Multidisciplinary Association for Psychedelic Studies, agrees that the letter was a step in the right direction, telling MintPress News that “it’s exciting to see such significant bipartisan support for eliminating barriers to privately funded medical marijuana drug development research.”

“Even though medical marijuana policies are being enacted around the country, physicians and their patients still don’t have the information they need to adequately recommend the safest and most effective strains to use,” he continued. “This letter is a clear indicator that responsible regulators are starting to putting science before politics.”

Talking to MintPress, an HHS spokesperson confirmed that Burwell’s office had received the letter.

“The Secretary appreciates hearing from elected officials,” the spokesperson said, adding, “HHS looks forward to responding to their letter.”

MintPress asked if the additional review process would be removed so that research on marijuana — a substance that almost half of the country has legalized for medicinal purposes — can proceed with fewer obstacles. In response, the HHS spokesperson said, “HHS will continue to support research on both the adverse effects and therapeutic uses for marijuana, provided the research applications meet accepted standards of scientific design,” as “HHS agencies have approved and funded hundreds of research projects (intramural, extramural, and independently funded) on adverse effects and therapeutic uses for marijuana.”

The National Institute on Drug Abuse currently contracts with Dr. Mahmoud A. ElSohly at the University of Mississippi to cultivate the only supply of marijuana that is legal on the federal level in the U.S. Marijuana grown at the university’s 12-acre garden is used for research purposes and is given to the four individuals grandfathered into the federal government’s own medical marijuana program.

The U.S. federal government has long been criticized by medical marijuana legalization advocates who point out that while the U.S. government claims marijuana has no medicinal value — the basis for the federal government’s stance that it can’t be legalized — the government simultaneously appears to bar scientists from conducting any research that hints at concluding that marijuana is less than harmful.

The feds reportedly never even conducted a study to look at the effects the plant had on the four patients enrolled in the federal medical marijuana program. Instead, the only group that studied marijuana’s physical and mental effects on the patients was the medical marijuana advocacy group Patients Out of Time. The group put the patients through pulmonary, respiratory and immune system tests at Missoula University in Montana. What the researchers found was that other than developing phlegm, the patients were fine.

According to Allen St. Pierre, executive director of the pro-pot advocacy group the National Organization for the Reform of Marijuana Laws, the increase in phlegm is not surprising, since that’s what happens when an individual is smoking vegetable matter. Talking to MintPress last year, St. Pierre said the same phenomenon would occur if someone smoked a carrot.

Earlier this year, legalization advocates, such as Riffle, urged President Barack Obama to end NIDA’s marijuana monopoly and remove all other research barriers on the substance. They argued that since the president himself has said that legalization “is inevitable,” more research on the plant is crucial.

Calls to reform the process for scientists to obtain marijuana came after it was widely reported that the federal government was blocking research to examine whether marijuana’s healing properties would benefit those suffering from post-traumatic stress disorder.

Though the U.S. Food and Drug Administration and the University of Arizona Institutional Review Board approved thestudy, the U.S. Public Health Service refused to let researchers purchase marijuana legally from the government — something both NIDA and the DEA only require for marijuana.

Due to public pressure, the federal government approved the PTSD study in March. While that decision was widely applauded, Riffle cautioned the public against getting too excited, as it was “just one study.” But the legalization advocate did add, “It’s nice to see, if only this once, politics no longer standing in the way of science.”

Change on the horizon?

As support for medical marijuana legalization hits record highs among the American public, and calls to end the drug war are growing increasingly loud, some members of Congress, like Oregon’s Blumenauer, are pushing to change costly federal laws that do more harm than good.

In a press release announcing the release of the letter to HHS Secretary Burwell, Blumenauer reminded constituents that while HHS may not ultimately respond as the lawmakers have asked, Congress is pushing for change to federal marijuana policy on many different fronts.

“Two weeks ago, we took a very important vote in the House to stop the DEA from interfering in states’ medical marijuana programs,” Blumenauer said. “Now we need the Administration to stop targeting marijuana above and beyond other drugs when it comes to research.

Specifically, the patent credits National Institutes of Health scientist Aidan Hampson with the discovery of the cannabinoid receptor in the brain that THC binds to, and says the substance could be used to treat diseases including Alzheimer’s, Parkinson’s and HIV, and could also help those who suffer from strokes or other trauma.

While the federal government appears to be moving toward supporting medical marijuana legalization and research much more slowly than individual states and the public as a whole, there is a chance that HHS may agree to drop the additional requirements for marijuana research, as the agency increased the number of cannabis-related studies it approved from 22 in 2003 to 69 in 2012.

The agency also approved 16 out of 18 applications for medicinal research on marijuana submitted by researchers not funded by the National Institutes of Health since 1999, when the new rule went into effect.

However, some remain wary of the government’s intentions when it comes to researching the drug, since it has been reported that only about 30 studies have been approved to study marijuana’s medicinal benefits. But those pro-medical marijuana studies found that marijuana may, among a number of possible benefits, contribute to removing even the most aggressive forms of cancer from the human body, help diabetics control their blood sugar, and slow the spread of HIV.

HHS may have been the recipient of Congress’ latest letter urging a change in federal medical marijuana policy, but based on the actions of various federal agencies, it appears that the largest group pushing back against medicinal legalization is the DEA.

Last week, the Drug Policy Alliance and the Multidisciplinary Association for Psychedelic Studies released a joint report chastising the law enforcement agency for not only ignoring the scientific evidence proving marijuana has healing powers, but also blocking access to the drug for research purposes.

“The DEA is a police and propaganda agency,” Ethan Nadelmann, executive director of the Drug Policy Alliance, said in a press release. “It makes no sense for it to be in charge of federal decisions involving scientific research and medical practice.”

Rick Doblin, executive director of MAPS, agrees that the DEA’s power needs to be reigned in, since the agency “has obstructed research into the medical use of marijuana for over 40 years and in the process has caused immeasurable suffering that would otherwise have been treated by low-cost, low-risk generic marijuana.”

While a lot of finger-pointing occurs at the federal level as to who is ultimately responsible for blocking marijuana research, the fact is a lot of the actions taken to revoke access to marijuana, even for medicinal purposes, are tied to the DEA.

For example, the federal medical marijuana program closed in the early 1990s, per the request of the DEA, and in 2007, a DEA Administrative Law Judge ruled that the agency’s “decades-long monopoly was harmful to the public interest and should end,” but Michele Leonhart, the head of the DEA, disagreed and has opted to not follow the orders issued in the ruling.