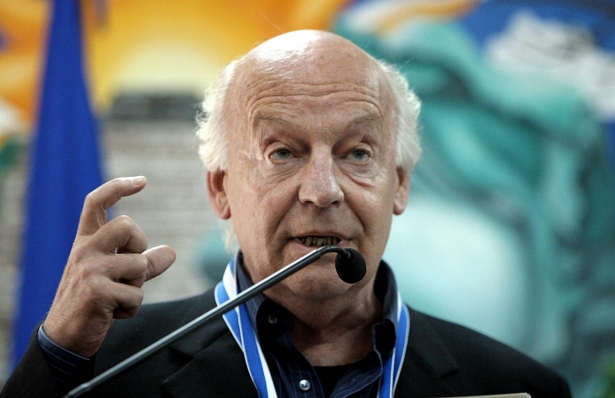 Eduardo Galeano, one of Latin America’s most beloved writers, died on Monday in a hospital in Montevideo, after a long battle against lung cancer. His first book, Las venas abiertas de América Latina, which the late Hugo Chávez famously presented to Barack Obama as a present, appeared in 1971 (published in English by Monthly Review Press in 1973 as Open Veins of Latin America). In 1973, Galeano was driven out of his home country of Uruguay following a US-supported coup.

Then, after yet another US-supported coup in Argentina, he found exile in post-Franco Spain, where, in 1978, he published Días y Noches de Amor y de Guerra (Days and Nights of Love and War, in English) and began his famous trilogy, Memory of Fire. These books are the highest expression of a genre that Galeano perfected. He somehow managed to be at once fragmentary and meta, impressionistic and expansive, weaving together fact, pre-Columbian myth, and snippets from everyday life into sprawling people’s epics.

Galeano’s death comes just a few days short of the first anniversary of the passing of Gabriel García Márquez. Galeano, born in 1940, was younger than García Márquez. But the works that made each of them famous came out in Spanish within years of each other. Cien años de soledad appeared in 1967; Las venas abiertas four years later. Both were translated into dozens of languages, and sold millions and millions of bonafide copies, along with the countless bootlegs hawked by street vendors from Santiago to Mexico City.

One Hundred Years of Solitude is a work of dense allegory operating on a bewildering array of levels and could be mistaken for something other than political. But for the artists, writers, and activists of Galeano’s and García Márquez’s generation, whatever else that storm was that wiped away Macondo, it was also capitalism. As if to underscore the point, Galeano subtitled the preface to Open Veins: “120 Million Children in the Eye of the Tempest.”

As they did with García Márquez, English-speaking audiences tended to like the sentimental Galeano, the Galeano who wrote of quixotic dreams and forgetting, who spoke in enigmas and historical metaphors. Me, I prefer the Galeano who used poetry to leaven an analysis of “modes of production” and “class structure,” of “endless chains of dependency that have been endlessly extended” and of a Latin America that had been force-fitted into the “universal gearbox of capitalism.”

Galeano himself came to think his early writing was too pessimistic and schematic, when last year an off handed remark was amplified into a New York Times’ headline: “Galeano Disavows his Book.” But economic reductionism possesses its own kind of lyricism: “The more freedom that is granted trade,” Galeano wrote in 1971, “the more prisons are needed for those who suffer from that trade. . . . The massacres caused by poverty (miseria) in Latin America are secret: every year, three Hiroshima bombs explode, silently, over its communities that are used to suffering with clenched teeth. This systematic violence, unseen but real, increases: the crime is covered not in the sensationalist press but in the statistics of the United Nation’s Food and Agricultural Organization.”

Within a year, then, with the deaths of García Márquez and Galeano, we have lost two embodiments of Latin America’s irrepressible Hegelianism, a refusal (as I put it in a Times review of Galeano’s last book, Children of Days) to give up on the idea that, despite all the tortures and terrors from the Spanish Inquisition to the death squads and disappearances of the Cold War, that history is redeemable. Centuries of repression and struggle have had an effect opposite of despair, searing into the region’s political culture an ability to both recognize the dialectic lurking behind the brutality and answer every bloody body with ever more adamant affirmations of humanity.

And like all good dialecticians, from Paulo Freire to Sartre, Marx and Hegel, Galeano’s histories were histories of being and becoming: “At the end of the day,” he said, “we are what we do to change who we are.” That’s an expression that, if abstracted from Galeano’s larger social criticism, could sound maudlin, reproduced ad nauseum on twitter feeds and FB pages. And indeed, with Gabo and Galeano gone, we are left with the insipid Paulo Coelho, who, though he got whatever talent he has from a Jesuit-educated leftist youth, now apparently thinks that “individuals are the true catalysts for historical change.” God help us. If Latin America ever finally loses the concept of what Galeano’s generation called realidad social – social reality – the world is in real trouble.

Galeano’s influence can’t be overestimated. I can’t think of any other book that Chávez could have handed Obama that would, in a single gesture, convey so much meaning, instantly transmitting to millions of Latin Americans years of imperial depredation. When Subcomandante Marcos of the Mexican Zapatistas (who since last June goes by the name Subcomandante Galeano) described, in one of his first communiques, oil wells as a “thousand teeth sunk into the throat of the Mexican Southeast,” he was echoing Open Veins.

Latin America’s current generation of left politicians came of age reading Galeano, and they are offering loving tributes. One of the most thoughtful is from Uruguay’s former president José Mujica. Mujica, born five years before Galeano and a leader of the Tupamaro insurgents in the 1970s, referenced the “old argument about whether art is form or content.” “Surely,” Mujica said, “art is both, and so was Galeano.”

The source of that content and form in Galeano was Marxism. In an interview he gave in 2005, Galeano talked about an epigraph from Marx he used for Días y Noches de Amor y de Guerra: “In history, as in nature, decay is the laboratory of life.” It was, Galeano said, a “perfect definition of the dialect.” But when his German publisher asked where, in Marx, he had found the epigraph, he couldn’t remember. Galeano looked and looked: “I dedicated my life to finding that phrase.” No luck.

I couldn’t find it in Marx either, even with Googlebooks. But Galeano might have gotten it from the French theorist George Bataille, who also used it as an uncited epigraph in this essay, written around 1929. That actually would make sense, for Bataille was (like Galeano would become) a mystical, or surrealist, Marxist. Galeano probed history’s inner logic, trying to make sense of its eternal recurrence, why the past in Latin America seemed inescapable, why it kept intruding into the present.

Why the spirits of the past seemed so easy to conjure up, why it was necessary to play out each new scene in world history in venerable disguise and borrowed language, to paraphrase Marx’s Eighteenth Brumaire. Even his first book, Open Veins, which Galeano himself described as economistic, reveals itself to be not just influenced by the dependency economists of the time but also by Walter Benjamin, whose Angel of History’s “face is turned toward the past.” Benjamin’s Angel contemplates history as a “single catastrophe, which unceasingly piles rubble on top of rubble.”

Galeano wrote in Open Veins that:

To think historically, Benjamin wrote— that is, to think like the rearward facing Angel—was “to awaken the dead and to piece together what has been smashed.” When you think about it, that’s a nice description of what Galeano tried to do.