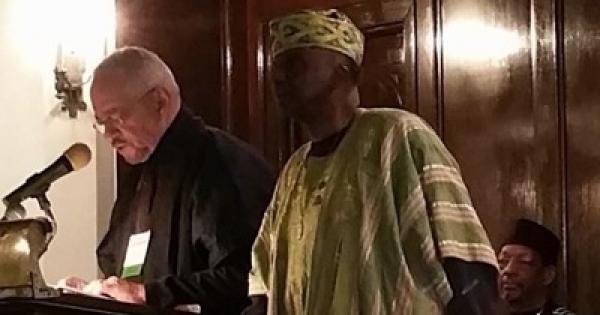 There is no going back now.

Yesterday history was made when the National/International Reparations Summit was held in New York City, bringing delegates and attendees from here locally and around the world.

The gathered leaders of the Reparations Movement will network, compare notes, and then strategize on concrete measures for pressing demands.

Speakers came from the African continent, from Europe, from the Caribbean and elsewhere around the world.

They gathered to continue the momentum from 2013 when Prime Minister Ralph Gonsalves of St. Vincent and the Grenadines brought Reparations to the global community, before world leaders, in a ground-breaking speech before the United Nations General Assembly in New York.

Since then, under the umbrella of CARICOM, the regional organizations that represent them, several Caribbean nations have filed a lawsuit against European nations, including Britain, France, and the Netherlands, for reparatory justice, as a result of the enslavement of African peoples, and the genocide of indigenous peoples, and the subsequent damages and harm that prevails today in these societies.

Here in the United States, the Institute of the Black World 21st Century (www.ibw21.org), under its tireless president, Dr. Ron Daniels has carried the torch; working with other groups to spearhead the organizing of this global gathering that launched yesterday at a packed Mother AME Zion Church in Harlem.

The gathering, which runs through April 12, continues this morning at York College of the City University of New York, in Jamaica, Queens, and later at District Council 1707, in Manhattan; it reverts to York College on Saturday with a concluding Reparations Rally Saturday evening at the church, which also hosts a press conference Sunday morning.

Professor Jeffries yesterday urged African Americans to use the power in their hands, the more than $1 trillion in annual spending power, to launch reparations, without waiting to drink from the trough of somebody else.

The gathering, which continues through April 12, is expected to bring to New York other notables including: Rep. John Conyers, a pioneer, who is to receive an award today for his dedicated effort, having brought to the floor of the House a Reparations study bill for several years now; Danny Glover, the humanitarian, activist and noted actor; Sir Hilary Beckles, Chairman of the CARICOM Reparations Commission and Vice-chancellor of the University of the West Indies; Dr. Conrad Worrill; Prof. Charles Ogletree; Prof. Julianne Malveaux; Assemblyman Charles Barron; and, several other speakers.

The gathering was also dedicated to the memory of Dr. Josef Alfredo Antonio ben-Jochannan, who died March 19, at age 96, and whose viewing was yesterday at the Abyssinian Baptist Church, and funeral service this morning, April 10, at the same church.

For a complete schedule of events over the next few days please go to www.ibw21.org