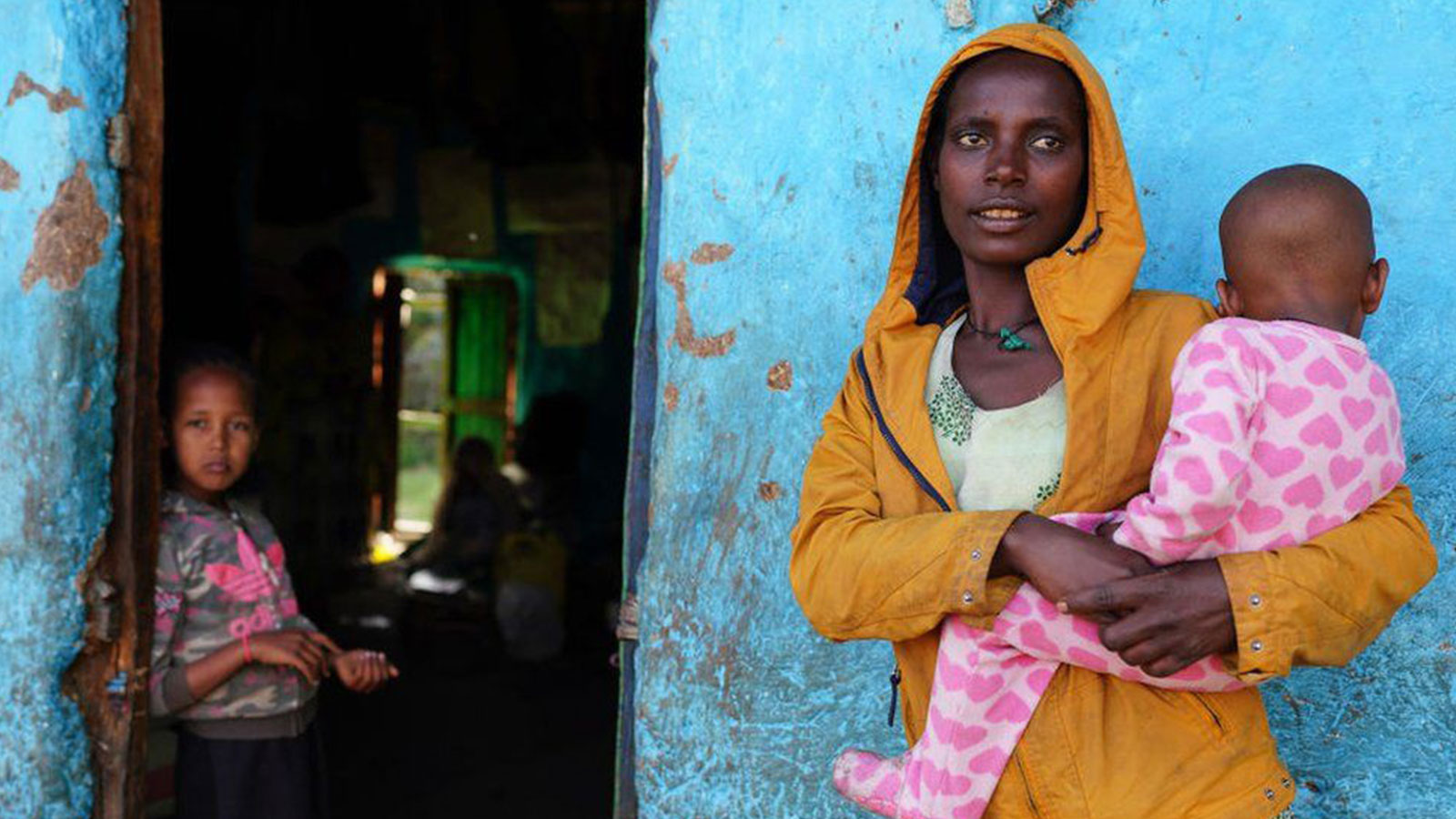 Ethiopia’s Tigray conflict: Why the rest of the world is worried

You Are Here: Home » Blog » Editors' Choice » Ethiopia’s Tigray conflict: Why the rest of the world is worried

US Secretary of State Antony Blinken is travelling to Kenya, where he will be discussing the conflict in neighbouring Ethiopia.

US and UK citizens have been told to leave Ethiopia “while commercial flights are readily available”, in the words of a British minister.

This alarming advice, with echoes of Kabul in August, was issued as a rebel force from the northern Tigray region looked like it could be making a move on the capital, Addis Ababa.

A year into the civil war, which has left a humanitarian crisis in its wake, the chorus of outside concern is getting louder.

African and US diplomatic pressure is increasing as what happens in Ethiopia has huge implications for the rest of the region and the wider world.

Why does it matter?

The numbers on their own are shocking.

At least 400,000 people are facing famine-like conditions in the north, 80% of essential medication is not available and more than two million people have been forced from their homes.

The federal government has been accused of deliberately preventing aid from reaching Tigray, which it denies.

In addition, there is evidence of unlawful killings, torture and sexual violence committed by both sides.

But there are also strategic interests.

Ethiopia, with a population of 110 million – the second largest on the continent, had been a key, stable Western ally in a volatile region.

There are concerns that the current fighting could trigger wider violence in this multi-ethnic nation that could even lead to it breaking up. If millions of people were to flee a heightened conflict, its neighbours would find it difficult to cope.

Landlocked Ethiopia borders six countries, two of which are already experiencing conflict – South Sudan and Somalia – and one other, Sudan, has just seen a military takeover.

It has troops in the joint African Union-UN mission fighting Islamist militants in Somalia and there are fears they could be withdrawn if they were needed back home.

Before leaving for his Africa tour, Mr Blinken warned that out-and-out conflict would be “disastrous for the Ethiopian people and also for others in the region”.

Troops from Eritrea are already fighting in Ethiopia and a prolonged crisis could suck in other neighbours.

But countries further afield have also been reportedly drawn in. 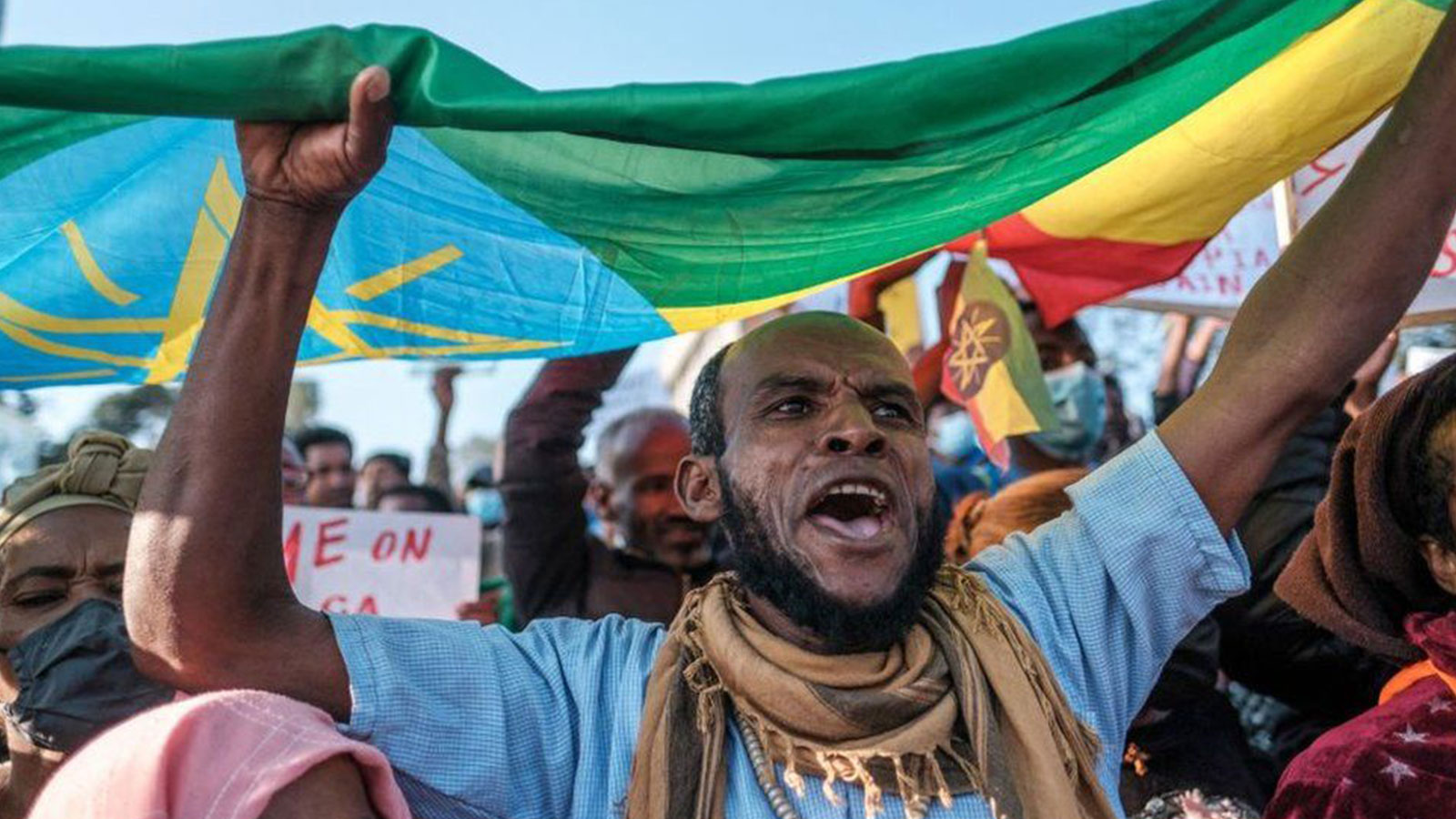 Earlier this month, tens of thousands turned out in Addis Ababa to back the government in the war against the TPLF (AFP)

Last month, the Reuters news agency said that Turkey had agreed to sell Ethiopia military drones. This deal threatened Turkey’s relationship with Egypt, which has its own argument with Ethiopia over a massive dam on the Nile, the report added.

Ethiopia has also purchased Chinese and Iranian weapons, and flights taking off from the United Arab Emirates are being used to transport them, the defence website Oryx reports.

From a US perspective, Ethiopia has long been seen as a reliable ally, especially during the so-called War on Terror.

It has fought against Islamist militants in Somalia on the frontline of that conflict and offered the US use of its airspace during the Iraq war. It was one of a few African countries to join the US’ “coalition of the willing”.

Stable government in Ethiopia has been vital to that relationship. The US has backed it up financially, handing over $4.2bn (£3.1bn) in aid between 2016 and 2020.

But the US envoy to the region, Jeffrey Feltman, has not shied away from criticising the federal government saying that its policies have resulted in mass starvation, and compared it to the Syrian regime of Bashar al-Assad.

Is the capital under threat?

After a series of advances by fighters for the Tigray People’s Liberation Front (TPLF) along a main highway leading from the north into Addis Ababa, the tension cranked up.

The US issued the evacuation call to its citizens and Ethiopian Prime Minister Abiy Ahmed announced a state of emergency and asked for more military recruits.

The Addis Ababa authorities called on people to register weapons.

Another rebel group allied to the TPLF said they were also getting closer to the capital.

The multi-ethnic nature of the city has added to tensions there, with some accusing the authorities of targeting Tigrayans in a series of arrests.

But the Tigrayan forces are still more than 300km from the city – around the town of Kombolcha. 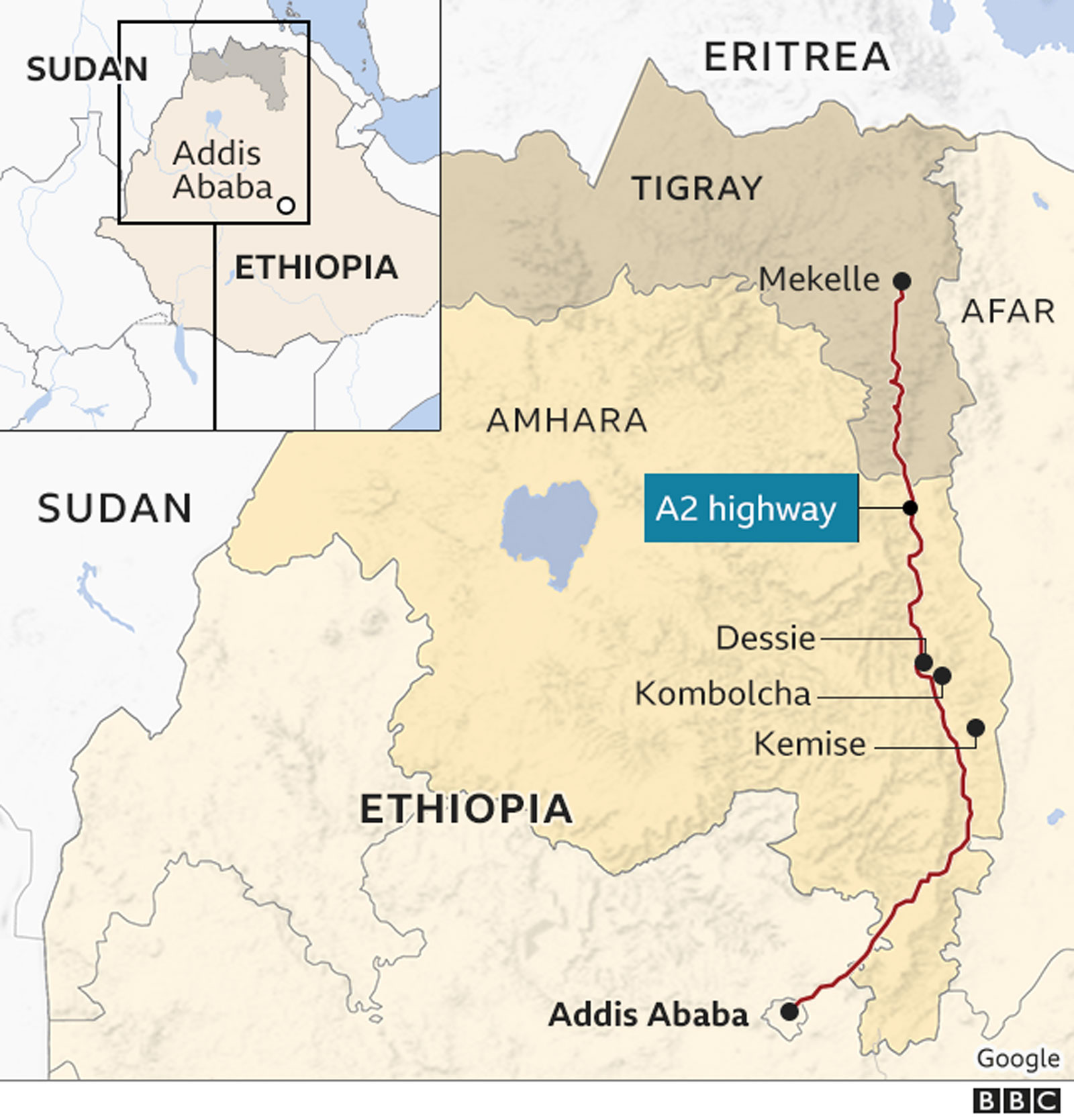 “It’s not the Taliban marching through Afghanistan and taking town after town without firing a bullet,” Tibor Nagy, the former US Assistant Secretary of State for Africa, told the BBC.

“Where the TPLF is operating now, there is huge resistance… and it would be a horrendously bloody battle for Addis Ababa.”

He believes that taking the capital is being used as a threat in the same way that a nuclear power might use the possibility of launching its weapons.

The TPLF has said that what it really wants is to enable aid supplies to get through to Tigray.

“We will continue to march [towards Addis Ababa]… but it’s not so much about Addis Ababa as our intention to arm-twist Abiy to lift the blockade,” spokesperson Getachew Reda told BBC Focus on Africa.

The Ethiopian government has designated the TPLF as a terrorist organisation and the prime minister has vowed to fight on.

“We will bury this enemy with our blood and bones and make the glory of Ethiopia high again,” Mr Abiy said earlier this month.

Are there any peace talks?

The concern now is that the conflict is entering a new phase and it will become increasingly difficult for either side to step back.

There are also fears the fighting could spread across the country.

The TPLF has allied itself with a series of groups also opposed to the government in a new coalition seeking the end of Mr Abiy’s premiership.

The African Union envoy to the region, former Nigerian President Olusegun Obasanjo, has spoken about a small “window of opportunity”.

“Time is short for any intervention,” he told the UN security council after he talking to both sides during a recent visit to Ethiopia.

He is calling for dialogue and a political solution, though has not yet described how that could be achieved.

The response by Ethiopia’s UN ambassador, Taye Atske Selassie, encapsulated the difficulties mediators will face. He said he respected the call for dialogue but then went on to describe the TPLF as “a criminal group”. 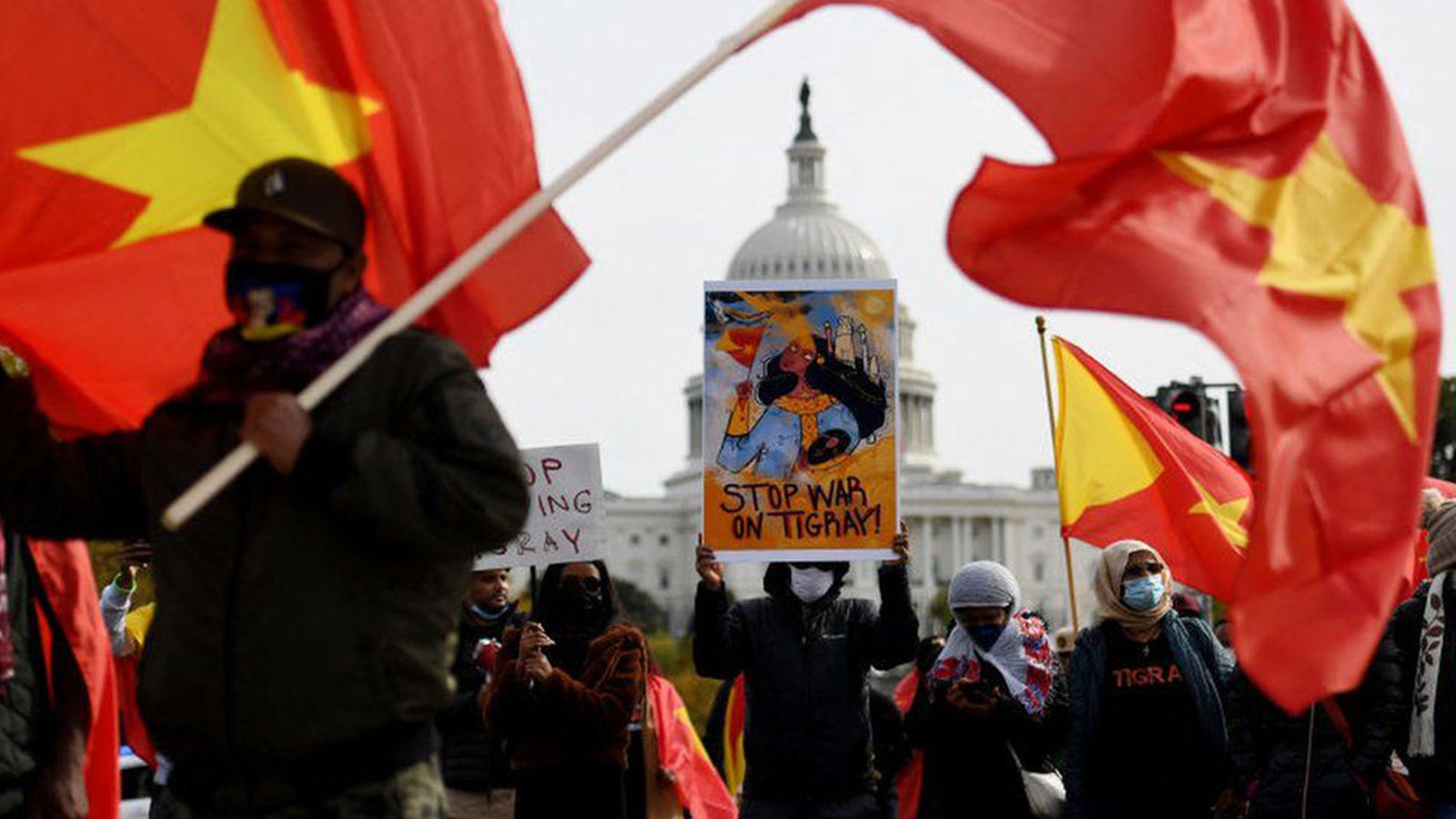 TPLF spokesman Mr Getachew, meanwhile, tweeted that “most ‘peace initiatives’ are mainly about saving [Prime Minister] Abiy, not about addressing the most critical political challenges in the country”.

Of course, negotiations to end wars are by their nature between seemingly implacable foes.

One way to get the two sides to sit down together would be for both the US and China, as well as others countries such as Turkey, to act together, the former US diplomat Mr Nagy argues.

“Abiy would not be able to resist the US and China saying the same thing.”

He says the first thing would be to get the fighting to end and make sure aid can be delivered and then gradually explore political options.

What is the war about?

At the root of the conflict is a disagreement between Prime Minister Abiy and the TPLF, which for almost 27 years dominated the whole country, not just Tigray.

Mr Abiy came to power in 2018 on the back of a wave of protests by members of the Oromo ethnic group.

The Oromos – Ethiopia’s largest group – long felt marginalised. Mr Abiy, himself an Oromo and part of the ruling coalition, was seen as the man who could resolve the problem.

In a whirlwind of reform, in which he liberalised politics and made peace with long-time foe Eritrea, the TPLF was sidelined.

The simmering dispute between the TPLF and Mr Abiy then erupted into war 12 months ago when Tigrayan forces were accused of attacking army bases to steal weapons and the federal government responded.