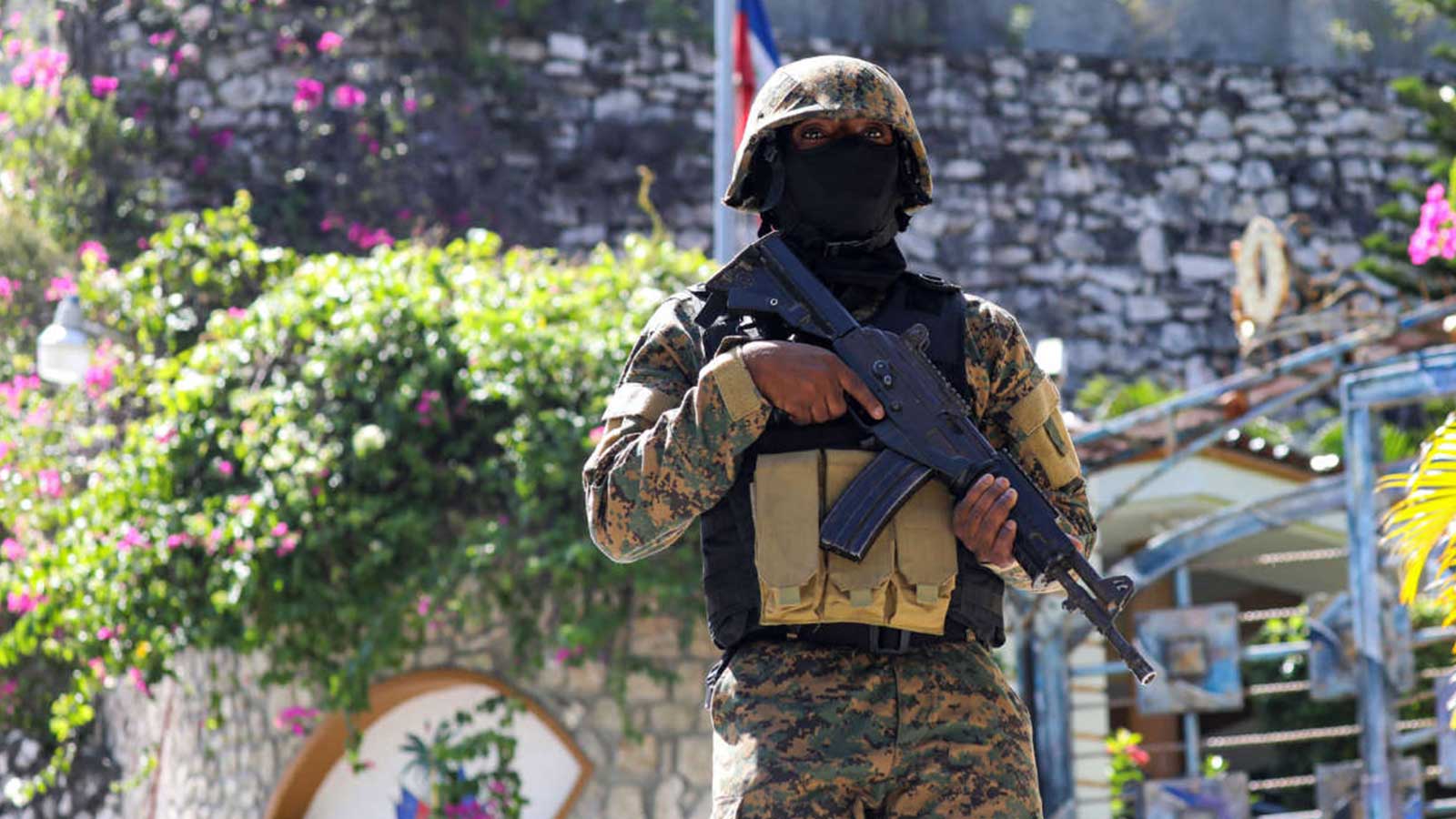 Foreign governments and NGOs will try to exploit Moïse’s assassination

As citizens of one of the Western Hemisphere’s earliest democracies, Haitians must be left to decide their own destiny.

The abhorrent assassination of Haitian President Jovenel Moïse has exposed the political instability long plaguing the Caribbean nation. If history is instructive, how this event is reported will also have deep consequences that may make matters worse. Corporate media outlets continuously amplify narratives of internal corruption and incompetence, while bolstering the interventions of foreign governments and nongovernmental organizations (NGOs), both of which have long-term adverse impacts on the country. Clichés are of no value to the citizens of the Caribbean republic, those of the Haitian diaspora, or other people around the world. The danger at this time of crisis is intensified by troubled political institutions and an inadequate public health response, all of which need to be shaped by the will and needs of the Haitian people.

Understanding the complexities of the present moment require some reconsideration of the context of the Moïse administration.

The late Jovenel Moïse was chosen by former President Michel Martelly to run for president and had difficulties challenging the assertions that he was a puppet of his predecessor. A Chamber of Commerce leader and banana exporter who was dubbed in Kreyol Nèg Bannann nan, “the banana man,” Moïse stressed agricultural development but had a sparse policy platform when he was elected in 2016. His administration featured some reformist measures that limited the contracts granted to powerful corporate interests and frustrated some elite interests, but overall, he faced widespread popular outrage and demonstrations. Major protests were sparked in July 2018 as reports indicated that various officials from the Haitian government embezzled $2 billion from aid from Venezuela’s PetroCaribe program, which was supposed to help sustain infrastructure in the country, including health care, education and sanitation. In 2018, after about a year of Moïse in power, there were already protests regarding the increasing price of fuel. Protests continued and intensified around questions of his legitimacy and the draconian measures he instituted in recent months.

Moïse governed by decree since the failure to hold elections in 2020 resulted in the country’s parliament not being renewed. The Haitian people protested against this erosion of other branches of government to hold the presidency accountable. While the United States and the Organization of American States supported Moïse’s claim that he was entitled to another year on account of his delayed installation to the office for roughly a year, his opposition and much popular sentiment contended that his five-year term in office should have concluded in February 2021. In addition to his persistence in the office of president, reports also made accusations that Moïse was using private security to remain in power. The impact of the COVID-19 pandemic escalated the political tension as the supreme court’s president, René Sylvestre, died from the virus in June of 2021. A day before his death, he appointed a new prime minister, Ariel Henry, in response to the resignation of the interim prime minister, Claude Joseph.

Moïse’s attempt to make Haiti a security state solely controlled by himself and the people he put into power sparked collective memories of the Duvalier family whose iron grip ruled the country from 1957 to 1986. His death was preceded by the arrests of 23 government officials in an alleged assassination conspiracy against him earlier in the year, which was widely seen as an attempt to suppress his opposition. He also sought to undercut the supreme court. Despite these actions, the Haitian people’s attention to and protest of these undemocratic measures signals a desire among the populace for accountability. However, the people will likely not find their demands met by the instability that follows this assassination. Not only is the path for succession constitutionally debated and uncertain, there is technically no authority granting the interim prime minister, Claude Joseph, the power to enact a state of siege which instates the present 15-day period of martial law governing the country.

The last time a Haitian president was assassinated, Jean Vilbrun Guillame Sam in 1915, the United States’s military occupation followed. Moïse’s assassination further destabilizes Haiti’s civil society, through which the Haitian electorate and the democratic institutions would ideally have been able to collectively remove him from office by peaceable means.

Our chief concern at this moment is what this will mean for the people of Haiti, their psyche, their physical and political well-being, given this horrendous situation. The instability exacts the highest toll on the country’s most vulnerable. There is a tragic sense of ongoing crisis that has become a way of life.

In 2004, following Jean-Bertrand Aristide’s ousting in a U.S.-backed coup d’état, the United Nations Stabilisation Mission in Haiti, also known as MINUSTAH, was established. During this 13-year mission, an estimated 800,000 infections and 9,000 deaths resulted from cholera, largely believed to have been introduced by UN peacekeepers. There are also several allegations of physical and sexual violence against MINUSTAH that have remained largely uninvestigated.

In addition, Haiti is currently grappling with the toll of the global COVID-19 pandemic. Moïse’s assassination leaves a Ministry of Health with no named minister, and a COVID-19 case count of nearly 19,000 (confirmed fatality ratio of ~2.4 percent). The legacy of imperialism is evident as Haitian officials (like officials in many other countries) vie for a limited number of vaccine doses “donated” by France and the United States. History tells us that in situations of political instability vulnerable populations pay the consequences. We often see the number of rape cases against women increase. Chaotic political rule, as we know well from living in the United States under the Trump administration, destroys trust among fellow citizens and in democratic institutions.

The health impact extends beyond the health infrastructure of Haiti, it impacts future health and increases emigration (“brain drain”). The Haitian diaspora in the U.S. and around the world also fear for loved ones, which further complicates their sense of self and community. They mourn the loss of place and the uprooting of family.

Accurate journalism is part of a strategy to a just way forward. Accurate reporting that creates transparency and understanding is essential. Haiti is not a racialized stereotype. It is not a “shithole” country. It never has been. And contrary to Biden’s recently resurfaced remarks, it does matter “a whole lot” what happens to Haiti. Haitians in Haiti and its diaspora will need to be at the center of reporting. As one of the Western Hemisphere’s earliest democracies, the Haitian people need to decide the destiny of their nation. Reports on the country must shine a light on the internal political machinations and external attempts at intervention to inform the people of Haiti and keep allies and friends apprised. In the end, Haitians must decide when they want to have elections and who they believe are the best candidates to build more democratic transparency and economic stability.

Cécile Accilien is a scholar of Haitian studies and Haitian Studies Association board member based in Atlanta, Georgia.

Nedghie Adrien is a Ph.D. candidate in the epidemiology department at Boston University School of Public Health. She is also, first and foremost, a daughter of Haiti (Twitter: @NedghieA).

Randal Maurice Jelks is professor of African and African American Studies in the Department of American Studies at the University of Kansas (@drjelks) and author of the forthcoming Letters to Martin: Meditations on Democracy in Black America (Chicago: Lawrence Hill Books, November 2021).

Nathan Jérémie-Brink is the L. Russell Feakes Assistant Professor of the History of Global Christianity at New Brunswick Theological Seminary. He is the co-convenor of the Slavery + Freedom Studies Working Group, at Rutgers University New Brunswick, and principal investigator for The Shelter Project (Twitter: @njeremiebrink).