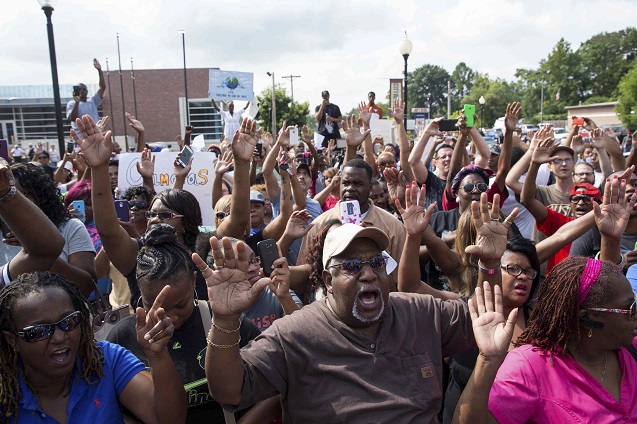 Community members gather outside the Ferguson Police Department to protest the death of Michael Brown, an unarmed black teenager killed by a police officer, in Ferguson, Missouri, August 11, 2014. The FBI said on Monday that it had opened an inquiry into the weekend shooting of Brown. (Photo: Whitney Curtis / The New York Times)

The day after unarmed teenager Michael Brown was shot to death by an unnamed cop in the streets of Ferguson, Missouri, local outlet Riverfront Times ran a blog post with details of Brown’s character and life.

He was a big, shy kid. He was a homebody who spent much of his adolescence playing PlayStation 3 at his mom’s house. He was planning to study music and engineering at Vatterott College, where classes began two days after his murder. He recorded rap songs in his grandmother’s basement and, like so many other young black men with a dearth of role models in popular culture on whom to model their lives, he wanted to be a rapper.

This profile doesn’t describe a kid who would snatch a gun from a cop’s hand while walking home to his grandmother’s. Yet that is precisely the absurd claim that Ferguson police are putting forth. Given a long history in American policing of covering up police misconduct – and the readiness of a public to believe the worst about black men – it’s not surprising they’re making the claim. More problematic is when media outlets parrot Ferguson PD’s absurd version of events.

The New York Times printed the officer’s account in a report the day after Brown’s murder:

At a news conference on Sunday morning, the St. Louis County police chief, Jon Belmar, said that a man had been shot and killed after he had assaulted a police officer and the two had struggled over the officer’s gun inside his patrol car. At least one shot was fired from inside the car, Chief Belmar said.

Belmar goes on to say that the “genesis” of the interaction was a physical confrontation initiated by the officer, who:

. . . approached Mr. Brown and another man. As the officer began to leave his vehicle, one of the men pushed the officer back into the car and “physically assaulted” him, according to the police department’s account.

Scott Greenfield, a criminal defense lawyer and blogger for Simple Justice, raised sharp questions about the official account of the shooting detailed in the Times in a blog post:

The genesis was when the shooter (cop) approached Michael Brown. Why? Then he “began to leave his vehicle.” Why? Then, according to the police account, “one of the men” pushed the cop back into the car and “physically assaulted” him. Why? Who? But mostly why would a kid who just graduated high school do this?

Why, indeed. It doesn’t make sense, especially when squared with the claim from police themselves that Brown was 35 feet away from the police vehicle when he was shot. The other young man with Brown says the officer initiated the altercation from inside his vehicle by demanding the two men “get the fuck on the sidewalk,” then slamming his car door into Brown, then grabbing Brown by the throat from his vehicle before firing multiple rounds into Brown.

None of these glaring contradictions have stopped outlets from uncritically printing the police account of events ad nauseum – especially old school broadcasters like ABC, CBS, NBC and FOX, but also cable networks like CNN. And while it’s standard journalism to report the claims of both parties in such a contentious event, good journalism must challenge accounts that seem obviously illogical and self-serving, especially when they come from the side that enjoys more power in society.

It took three whole days for any media outlet to report any version of events other than the police’s.

This distorted coverage is not an aberration for dominant media outlets. Cops and mainstream media are intertwined in a symbiotic relationship that began with the inception of the nightly news, and because of the construction of traditional contemporary journalism, reporters often become (sometimes inadvertent) flaks for police versions of events.

“To provide a steady stream of crime stories, a crime reporter must develop reliable police sources and maintain their trust,” writes criminologist Ray Surette in the book Media, Crime and Criminal Justice. “Although sometimes critical of law enforcement, successful crime reporters develop a working relationship with the police that benefits both. Over time, the two sides develop similar work experiences and outlooks.”

That experience transcends the individual reporter working the crime beat: Because that reporter is the ambassador of their entire news organization into the policing world, their relationship with the department represents the entirety of their news organization’s relationship with the department. And because crime news is easy to understand, “prepackaged and popular,” it allows news organizations to routinize their reporting at a minimal cost – an especially saliva-inducing prospect for networks that are hemorrhaging money.

It’s no wonder that, in peddling the mythology that the police and their victims (almost always dark skinned and working class or poor) are two groups with equal stature in society, media accounts of Brown’s death gloss over a lengthy history of police cover-ups and deceptions encouraged by a docile media conditioned not to ask too many hard questions.

Harassment and brutality partially stem from feelings of immunity from accountability, which themselves stem from institutionalized corruption. And given this country’s long, consistent history of police-perpetrated killings, beatings and unlawful searches and seizures, it is not conjecture, or even controversial, to suggest that police corruption in the United States is endemic and pervasive. The inculcation of a “warrior” mindset within the police, and the extreme militarization of police forcesthanks to federal anti-drug and terror programs that slather departments with cash and weapons, only embolden a feeling of invulnerability that leads to itchy trigger fingers like the one that killed Brown.

Recent surreal events drive the point home even further: Against all reason, the president of New York’s police union claims that an unarmed man choked to death by an NYPD officer could not have been killed by a chokehold, dismissing a medical examiner’s classification of the death as a homicide as politically motivated.

On the flipside, impoverished communities are outright demonized, painted as having a supposedly heightened propensity for violence – a fiction that the mainstream media indulges every day. Communities of color are not the demographic to whom the media caters, which is why so much coverage of Brown’s murder has fixated on the subsequent destruction of property in Ferguson by a population completely fed up with the brutalization of black bodies. Coverage of their outrage and pain is obscured by the media-whipped specter of black violence that has haunted white America since the threat of slave revolts. This is a tried and true theme, after all – one that guarantees ratings, and thus, profits.

We’ve heard, over and over, about stores being vandalized in the wake of Brown’s death. Less publicized was a 2012 report by the Malcolm X Grassroots Movement, which showed that police, security personnel or vigilantes kill a black person every 28 hours – a fact that contributes to why people feel so alienated that they lash out. And we haven’t heard from mainstream media about how the Ferguson police threatened the few reporters on the scene of demonstrations as officers lobbed tear gas grenades into crowds and called black protesters “fucking animals.” We haven’t been hearing about St. Louis County’s active procurement of an MRAP war truck, nor of St. Louis Police Chief Sam Dotson’s thirst for more tools of war. (Military equipment handed down to police is often shared by police departments within the same regions.)

We don’t hear about these things because the mainstream media has simply been shoving the Brown tragedy through a pre-established filter that grants police the benefit of a doubt – despite all logic and history – and sees their dark-skinned victims as deserving of at least some blame, no matter how blameless they may be.

Three entire days passed before any media outlet reported on any coherent version of the events, other than that provided by Ferguson police. It took sustained resistance by the population of Ferguson for networks to believe it was even worthwhile to include the voices of the victims. The widespread narrative of events has been presented in a vacuum, as if five centuries of slavery, legal exclusion, redlining and victimization by police have no bearing on the public display of raw human emotion happening in Ferguson right now.

Then again, the mainstream media has always fueled resentment toward the type of people in the streets of Ferguson right now. If that isn’t evidence of their complicity in the murder of Michael Brown, I’m not sure what is.

Celebrating the Haitian Revolution: Reflections on Cruising Into History

Celebrating the Haitian Revolution: Reflections on Cruising Into History
We Need Your Support — Donate, Share, Sign-Up Ways to Support