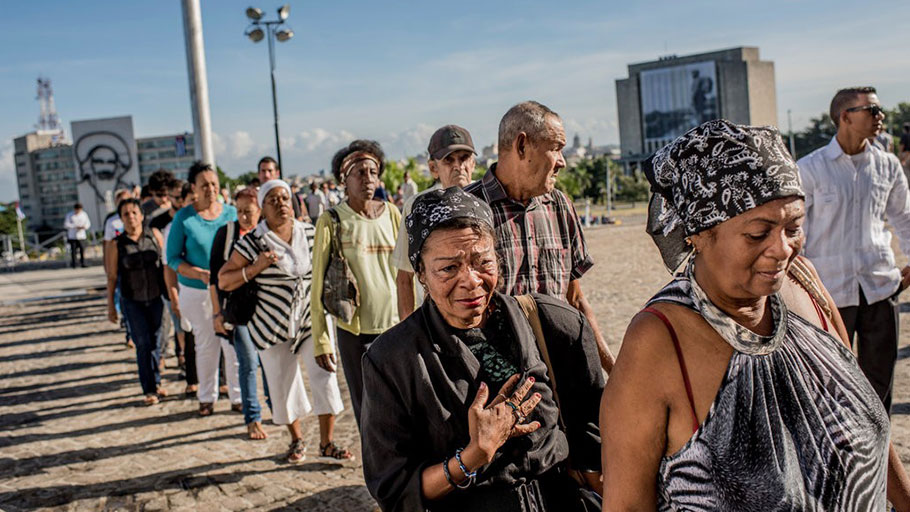 In Cuba’s Change of Leadership, More Black Officials in Power

By Frances Robles and Azam Ahmeda —

As the departing Cuban president, Raúl Castro, tells it, even too many of the radio and television newscasters in Cuba are white.

It “was not easy” getting the few black broadcasters now on the air hired, Mr. Castro said in his retirement speech Thursday, a remarkable admission considering the state controls all the stations.

So it was all the more extraordinary to see last week how many women and Afro-Cubans were chosen for positions in the highest echelon of Cuban politics in the new government: Half of the six vice presidents of the ruling Council of State are black, including the first vice president, and three are also women.

The new council will serve under the new president, Miguel Díaz-Canel Bermúdez, who took over on Thursday.

That the first administration in 60 years without a single Castro would include so many women and black officials was notable in Cuba, where increasing business opportunities have only swelled economic racial disparities. The move also signaled the growing significance of the Afro-Cuban movement, marked in the past 20 years by artists, hip-hop musicians and intellectuals who are more willing to speak out about the problems affecting black people on the island, experts said.

While official statistics reflect that less than 10 percent of the population is black, in reality, most estimates put the number far higher.

The Cuban government under the Castros has historically been viewed as one made up mainly of white men, especially those of advanced age. Although it has generally had at least one Afro-Cuban in a high-ranking position, cynics dismissed them as symbolic figures. 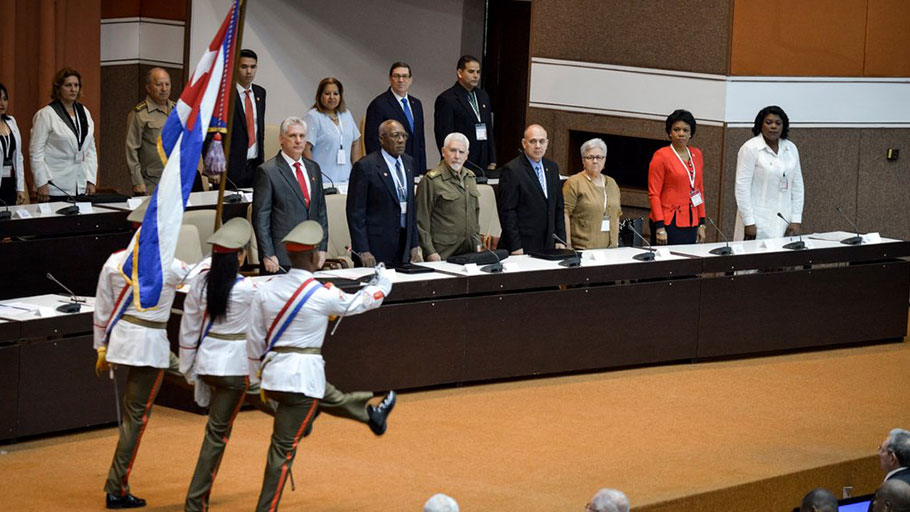 Although skeptics doubt that too much will change to address the disparities faced by many black people in Cuba, even some of the government’s harshest critics acknowledged that the diversity shift was an important development.

“Yes, it has great significance,” said Ramón Colas, a black anti-Castro activist who sought political asylum in 2001 and now lives in Mississippi. “The Cuban revolution has historically been white, and seen from the outside as a revolution by white men, where black people were part of the crowd, spectators who were silent or applauded, but never participated.”

Mr. Colas said the election, a process in which Mr. Castro and the Communist Party had full control, showed that the former Cuban leader has “big ears” and was willing to listen to the outcry from black civic and arts organizations. But he noted it would be even more noteworthy if the three black people on the council used their positions to push for racial equality.

“Wouldn’t it be great if they used those positions to say, ‘As a black Cuban, I am against injustice against black people in Cuba?’ ” he said. “I doubt that they can do that. They are not allowed. Fidel declared that racism is a problem that ended.”

If anything, Raúl Castro’s move to shift high-ranking positions to black leaders was an acknowledgment that racism and discrimination had not, in fact, been solved by the revolution.

In his remarks on Thursday, Mr. Castro said the struggle to move beyond percentages continued.

“We still have the battle of proportions, not just in numerical aspects, but qualitative — in decision-making slots,” he said. “Three women were elected vice president of the Council of State, two of them black — not only for being black, but for their virtues and qualities.”

While inequality persists in the country, the Castro revolution did make important strides for black people.

Before the revolution, social stratification was profound, with black Cubans open to far less opportunity and enduring far more discrimination than their lighter-skinned fellow citizens. When Fidel Castro came to power after the revolution, one of his early edicts essentially sought an end to racism. 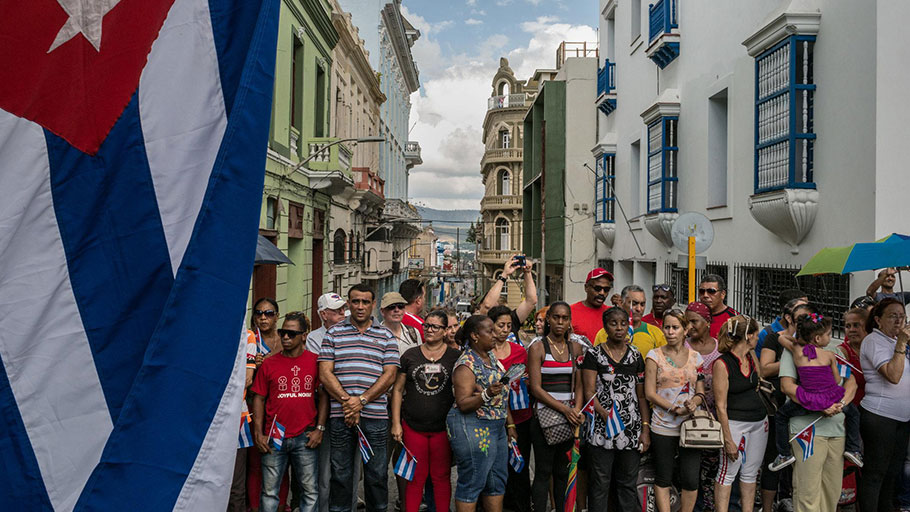 Waiting for the carriage carrying the ashes of Fidel Castro in central Santiago de Cuba. Credit Mauricio Lima for The New York Times

The result was that systemic racism as it exists in the Americas is far less present in Cuba, and social and educational opportunities generally more present for black Cubans — even those living far from the capital. For many of the revolution’s proponents, it was one of the major achievements at a time when some parts of the United States were still requiring black people to drink from separate water fountains.

Alejandro de la Fuente, a Harvard University Cuba studies professor who has written extensively on Afro-Cubans, said inequality diminished in several ways. His research showed, for example, that in the 1980s, the life expectancy gap between black and white people was better in Cuba than in Brazil or the United States.

But the improvements, brought on by socialized education, were offset by the economic nose-dive Afro-Cubans faced after the collapse of the Soviet Union in the 1990s. More Cubans started living on cash remittances sent from the United States. And almost all the Cubans sending money from the United States were white.

Mr. de la Fuente noted that both of the black women named to the council, Inés María Chapman Waugh and Beatriz Jhonson Urrutia, are engineers from eastern Cuba, which makes them an example of the kind of educational mobility possible for black women in the country. Mr. de la Fuente said their promotions were largely symbolic, but still important.

“Even if this was window-dressing, it would mean they feel the need to dress the window in a certain color, and that is something one would not have said 30 years ago,” Mr. de la Fuente said.

Only 9 percent of Cubans identified themselves as black in the 2012 census, a sign that most Cubans don’t see benefits to self-identifying as Afro-Cuban, he said. Most estimates have the number of black people in Cuba much higher.

“If you go by the one-drop rule, like you have in the United States, Cuba is like 90 percent black,” Mr. Colas said with a laugh.

Katrin Hansing, a professor at Baruch College in New York who is studying racial inequality in Cuba, said the presence of more black people on the council was likely to be met with a collective shrug on the island. The economic disparities have grown so stark, she said, that more shantytowns are popping up on the outskirts of big cities, and people of color largely populate them.

“It won’t change their socioeconomically difficult lives,” Ms. Hansing said. “The Communist Party will not change because there are three more black people at the top.”

In Cuba, many people interviewed agreed, and some did not even know the changes had been made.

In the neighborhood of La Corea, marooned on the outskirts of Havana, most people had more pressing concerns to ponder than the racial balance of the nation’s top officials. Heaps of trash were piled on street corners, covered in thick swarms of flies. A water leak from a pipe beneath the sidewalk flowed unchecked, leaving pools and summoning mosquitoes.

The neighborhood contrasts sharply with the proud, if battered, colonial structures of Old Havana or the resplendent mansions of Vedado or Miramar. Homes are slapped together with rusty shards of corrugated metal or raw cinder block and cement. The streets are so worn in parts they are simply dirt.

In the largely black neighborhood, residents were somewhat divided on the meaning of the new racial composition of the government. Manuel Garro Gómez, 65, seemed to take the official line on the matter. “Cuba says there is no discrimination and that’s largely how it is,” he said. “Before the revolution, there was absolutely no relation between black people and whites. Today we mix easily.”

Down the street, Yasmani Santo, 30, once informed about the change, said it was a decent move.

“This reflects the population a bit more, which I appreciate,” he said. “But I’m not sure it will change anything.” Referring to the neighborhood’s dilapidation, he said: “People come and make promises to fix these things and nothing happens. Let’s see if this new president does anything.”

Abraham Jiménez Enoa, a writer and director at El Estornudo magazine in Havana, said racism was a part of daily life for black Cubans, no matter what the state says. When he has dated white women, his friends offered snide remarks that he was “trying to get ahead.”

He said the police were more likely to stop a black person, especially one who is carrying things like towels or sheets, which are items often pilfered from hotels by Cubans without money to buy their own.

In Old Havana on Thursday, Josué Soto del Sol, 10, smiled and then shrugged when he heard about the appointments of the three black leaders. “It’s good,” he said. “We are all black in Cuba.”

An earlier version of this article referred incorrectly to research about the racial balance among college students in Cuba and the United States in the 1980s. A study by Alejandro de la Fuente referred to graduation rates rather than attendance, and found that the proportion, not the number, of black Cubans with degrees compared with white Cubans was close, and that the proportion, not the number, of white college degree holders in the United States was twice that of African-Americans.