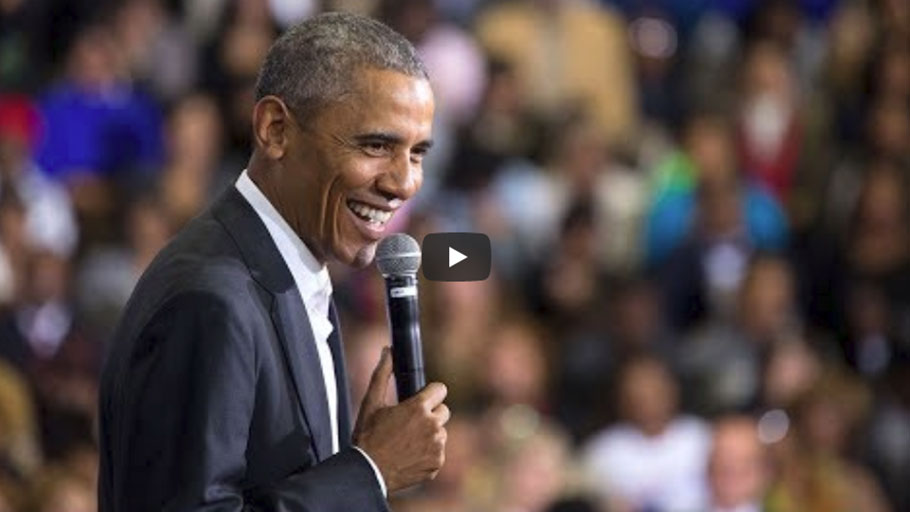 By Summer Meza, The Week —

Former President Barack Obama said that these “strange and uncertain” times can only be combated with an effort to “keep marching” and “keep building” away from discrimination and institutional inequality.

Obama made his first major speech since leaving office at the Nelson Mandela Annual Lecture in South Africa on Tuesday. He warned of “strongman politics” that are ascendant, “whereby elections and some pretense of democracy is maintained, but those in power seek to undermine every institution or norm that gives democracy meaning.” He additionally condemned “far-right” political parties that “are based not just on platforms of protectionism and closed borders, but also on barely hidden racial nationalism.”

The former president voiced concern that the world is “threatening to return to a more dangerous, more brutal way of doing business,” and worried that social media is helping spread “hatred, and paranoia, and propaganda, and conspiracy theories.” He said that humanity is at a crossroads, and hoped that people would be willing to work towards accepting a single “objective reality” in order to keep politicians honest.

Watch his full speech above, via the Obama Foundation.

By Jelani Cobb, The New Yorker — 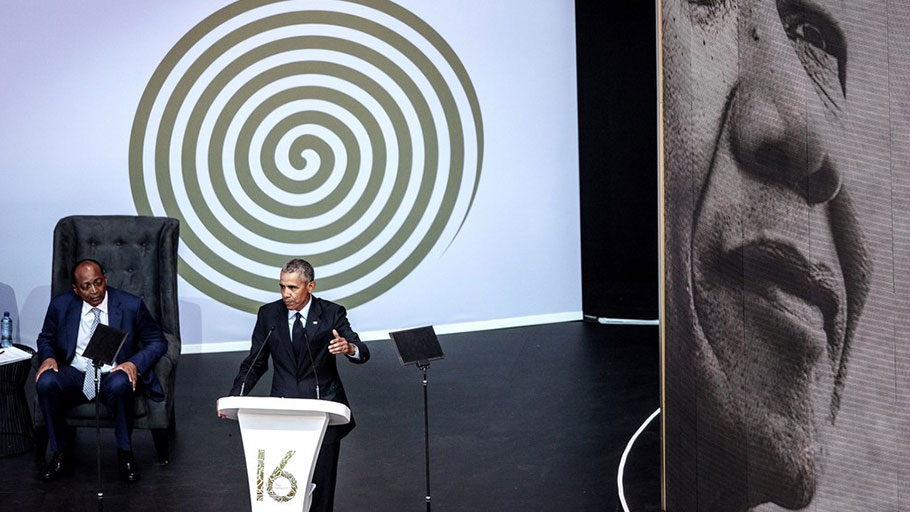 With his Nelson Mandela Lecture, in Johannesburg on Tuesday, Obama offered the sharpest possible contrast between himself and his successor—between statesman and demagogue. Photograph by Gianluigi Guercia / AFP / Getty

Like a mad experiment proving the elasticity of time, the Trump era has confounded our temporal sensibilities. The past seven days have witnessed the hostile questioning of an F.B.I. agent by Republican members of the House of Representatives intent on exonerating the Trump campaign from the special counsel Robert Mueller’s investigation; Mueller’s indictment of twelve Russian intelligence officials on charges of interfering in the 2016 election; a bizarre set of exchanges between Donald Trump and nato; a visit to the United Kingdom, during which the President insulted Prime Minister Theresa May; a press conference in Helsinki, in which he all but offered President Vladimir Putin a foot massage; and the arrest of a Russian woman with ties to the National Rifle Association on charges of espionage. This level of intrigue would be overwrought for a season of “Homeland”; as a moment in our national affairs it is vertigo-inducing.

Thus, on Tuesday, when Barack Obama walked onto a stage in Johannesburg to deliver the 2018 Nelson Mandela Annual Lecture, commemorating the centenary of the former South African President’s birth, he offered the sharpest possible contrast between himself and his successor—between statesman and demagogue—and, crucially, the distinction between a man who grasps history as the living context of our lives and one unburdened by the knowledge of how we arrived at the present and what that means for the future. President Obama was elegant and effortlessly charismatic in ways that recalled the finer occasions of his political tenure. He spoke fully aware of his status as the most credible living representative of American interests. But that charm and self-assuredness were also discordant amid the political alarms sounding in the background. These are “strange and uncertain times,” Obama noted at the outset of the lecture. Some observers had speculated that he might finally strike back at the many assaults on his character that Trump has made since taking office. But he chose not to criticize Trump—at least not explicitly. (“Politicians have always lied,” Obama said, and then added, to laughter and applause from the audience, “But it used to be that if you caught them lying they’d be, like, ‘Oh, man.’ Now they just keep lying.”) Instead, he dissected the forces that created the bedlam parade for which Trump serves as drum major.

The twenty-first century has taken another path: the emergence of a transnational ultra-élite, combined with the declining regulation of financial industries, created the conditions that wrecked the global economy a decade ago, and facilitated the surge of a nationalist bigotry and populism. The best evidence for that argument was also onstage in Johannesburg: Obama was there showing deference to one of the great moral visionaries of the twentieth century; a day earlier, in Helsinki, Trump had adopted a similar posture in regard to a present-day autocrat whose critics have a way of periodically turning up dead. Mostly, Obama’s performance highlighted how comforting it is to listen to a leader whose ideas form a coherent world view, even if you don’t always agree with it. Trump is governed by some algorithmic factor of ego, fear, impulse, greed, and the suasion of random celebrity petition; cogent analysis of social and historical dynamics seems to fare nowhere in his thinking.

Obama did not mention Trump in Johannesburg, but he didn’t need to. He praised the stabilizing influence of nuclear détente and of “a unified Europe anchored in nato.” He cited the benefits of workers’ rights and immigration. He decried xenophobia, attacks on the press, anti-intellectualism, and the denial of science. “I can’t find common ground if somebody says climate change is just not happening, when almost all of the world’s scientists tell us it is,” he said. “If you start saying it’s an elaborate hoax, I don’t know what to—where do we start?” In the statement that drew the most comment, he warned, “Strongman politics are ascendant suddenly, whereby elections and some pretense of democracy are maintained—the form of it—but those in power seek to undermine every institution or norm that gives democracy meaning.”

As a rhetorical display, Obama’s speech was nearly flawless, though his suggestion, in what he called an ad-libbed aside, that the global élites—whose prerogatives have created a staggering degree of inequality not only between nations but within societies—should define ambition by the number of lives they can positively affect seemed almost quaint. It was an offering reminiscent of the social-gospel advocates of the robber-baron era (and, perhaps, of his own reticence in calling out attempted interference before the 2016 election). It’s difficult to criticize someone whose idealism led to the first black Presidency of the United States for failing to adequately consider our potential for selfishness and tribalism. When the Reverend Fred Shuttlesworth was once asked why he had helped found the Southern Christian Leadership Conference, he said it was because “rattlesnakes don’t commit suicide.” The comment stood in harsh contrast to the lofty rhetoric that is most closely associated with the civil-rights movement, but it was a more honest rendering of the nature of that struggle than many. The moment we inhabit is no less alarming.

Jelani Cobb is a staff writer at The New Yorker and the author of “The Substance of Hope: Barack Obama and the Paradox of Progress.”