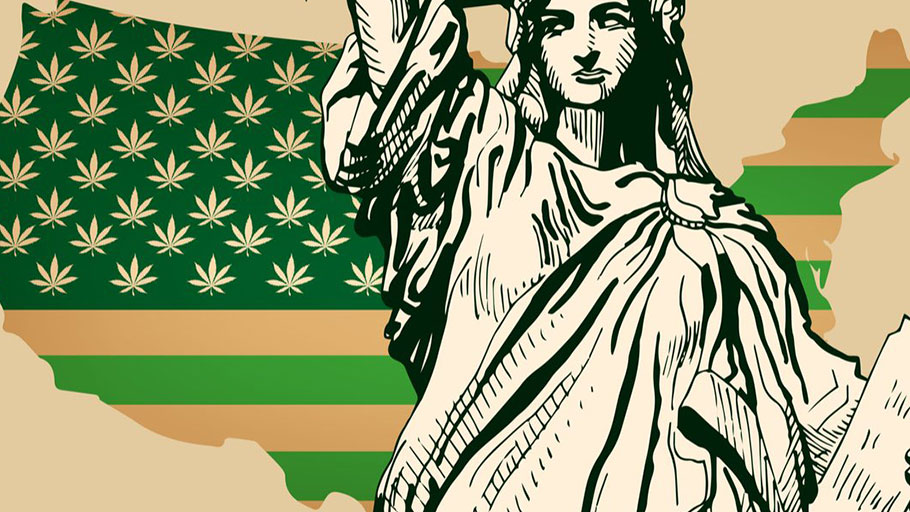 In a historic vote, House Democrats passed legislation that would decriminalize marijuana on the federal level and begin to address the harms caused by drug policing in lower-income neighborhoods and communities of color.

The House voted 228-164 on Friday to pass the Marijuana Opportunity Reinvestment and Expungement (MORE) Act, which would remove cannabis from the federal list of illegal drugs, create a process for expunging “non-violent” federal marijuana convictions, and funnel tax revenue from legal cannabis sales to communities that are disproportionately targeted by police in the war on drugs. It’s the first time in history that a chamber of Congress has voted to end federal cannabis prohibition.

The vote closely follows the passage of a state ballot initiative in Oregon that decriminalized possession of small amounts of all illegal drugs and created a system for funding addiction treatment with tax revenue from legal cannabis sales. Experts have predicted that racial disparities in drug arrests will plummet in Oregon as a result.

However, racial disparities in cannabis arrests remain high nationwide and persist even in states that have decriminalized cannabis or legalized retail sales, according to the American Civil Liberties Union (ACLU). That’s one reason why marijuana justice activists say drug legalization and decriminalization initiatives must include strong racial justice provisions. While last-minute changes weakened some of the MORE Act’s racial justice language by excluding people with certain marijuana trafficking convictions from expungement and job opportunities, supporters say the bill provides an early model for the nation.

“With this vote, Congress is recognizing the disproportionate impact enforcement has had on our communities and calling for the unjust status quo to be disrupted,” said Maritza Perez, the national affairs director at the Drug Policy Alliance, a group that helped introduce the MORE Act in Congress.

The MORE Act is expected to face opposition in the Republican-controlled Senate, where it’s unlikely to pass before the end of the year. However, Sen. Kamala Harris introduced companion legislation in the Senate that is backed by other leading Democrats, including former presidential candidates Sen. Elizabeth Warren and Sen. Cory Booker. Harris is now vice president-elect and could use her powerful position within the incoming Biden administration to champion the MORE Act in the next Congress and help end federal marijuana prohibition once and for all.

Democrats already postponed a vote on the bill in October after Republicans attacked them for taking up cannabis decriminalization during heated pandemic relief negotiations ahead of the election. Several GOP lawmakers were at it again this week, claiming that Democrats are prioritizing weed while year-end deadlines loom for passing government spending bills and a second COVID-19 relief package. House Democrats already passed a second COVID-19 relief bill months ago, though the Republican-controlled Senate refused to take it up.

The MORE Act would effectively decriminalize marijuana flower and cannabis products such as edibles at the federal level, eliminating the conflict between the federal law and a number of states that have legalized cannabis for medical and recreational use. States would be left to decide how to regulate marijuana within their borders. In order to end prohibition nationally, laws would need to be passed in the 14 states where cannabis remains illegal for both medical and recreational use.

Drug prohibition has undergirded some of the massive racial disparities in the criminal legal system for decades, and Black people are up to 3.6 times more likely to be arrested for marijuana possession than whites, despite using marijuana at similar rates, according to the ACLU. Congress has considered a number of marijuana reform bills in recent years as legalization continues to sweep the country, but activists say the MORE Act’s racial and reparative justice components make it the most progressive path toward ending prohibition.

For example, the MORE Act would prohibit federal agencies from denying public benefits to people with marijuana convictions, and help prevent immigrants who use marijuana from being deported. The MORE Act would also place a 5 percent tax on retail marijuana sales where they are legal and funnel the revenue toward jobs programs and community services in areas of the country hard-hit by policing and mass incarceration. The legislation also has measures aimed at helping entrepreneurs of color enter the legal cannabis industry, which is dominated by white people.

“Make no mistake, this is a major racial justice bill,” said Rep. Barbara Lee (D-California), one of the first members of Congress to push cannabis legislation with racial justice provisions, on the House floor.

With 68 percent of Americans opposed to marijuana prohibition, and with legalization spreading on the state level, Congress is under mounting pressure to reconcile state and federal cannabis regulation. While some Republicans support allowing states to set their own cannabis laws, conservative lawmakers oppose the MORE Act’s new taxes and racial justice provisions. Only five Republicans voted for the MORE Act in the House.

Runoffs for Georgia’s two Senate seats this weekend give Democrats a chance at 50 seats in the next Congress — allowing Harris to cast tie-breaking votes.