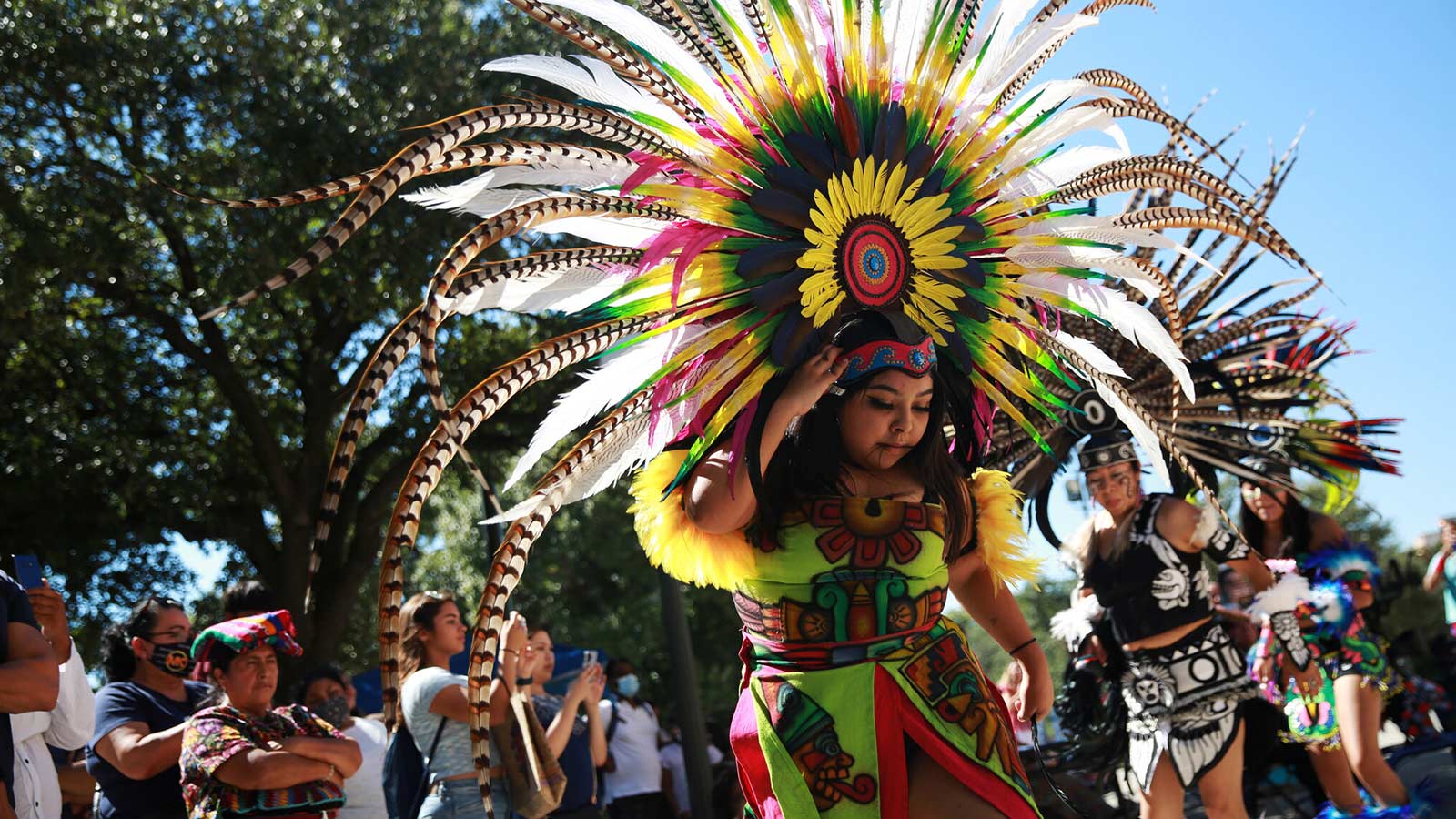 Many cities and states are observing the day. Here’s some of the history behind it.

“For generations, Federal policies systematically sought to assimilate and displace Native people and eradicate Native cultures,” Mr. Biden wrote in the proclamation issued on Friday. “Today, we recognize Indigenous peoples’ resilience and strength as well as the immeasurable positive impact that they have made on every aspect of American society.”

Over the past several years, states including Alaska and New Mexico have adopted the holiday, choosing to forgo Columbus Day celebrations and heeding calls from Indigenous groups and other residents not to celebrate Christopher Columbus, the Italian navigator the holiday is named for, who they say brought genocide and colonization to communities that had been in the United States for thousands of years. Many around the country, however, still celebrate Columbus Day or Italian Heritage Day as a point of pride in Italian culture.

Not all states have accepted Indigenous Peoples’ Day, and some members of Indigenous communities say recognizing the day does not go far enough. It is not yet a federal holiday, though there is a bill in Congress that proposes to make it one. Here’s more background.

What is Indigenous Peoples’ Day?

Typically on the second Monday of October, Indigenous Peoples’ Day recognizes the Indigenous communities that have lived in the United States for thousands of years. It grew increasingly common as a replacement for Columbus Day, which is meant to celebrate the explorer who sailed with a crew from Spain in three ships, the Nina, Pinta and Santa Maria, in 1492.

Before the president’s proclamation, dozens of U.S. cities and states commemorated Indigenous Peoples’ Day. Colleges and corporations have increasingly recognized it. South Dakota is believed to be the first state to have officially recognized the day (as Native Americans’ Day), in 1990; members of several tribes in the Sioux Nation make up around 10 percent of its population. Alaska, Oregon and Vermont also officially established the day as a holiday; many more states recognize it through proclamations. Cities like Berkeley, Calif., Seattle and Minneapolis also were early adopters.

Similar commemorative days exist under other names around the world. Canada has recognized a National Indigenous Peoples’ Day on June 21 since 1996, and the country honored the first National Day for Truth and Reconciliation on Sept. 30 of this year — the government there has apologized at various points for the suppression and forced assimilation of Indigenous communities.

In recent years, statues of Columbus have been taken down in cities around the world, including Mexico City.

Are there closures for the day?

The United States Postal Service and post offices will be closed in observation of Columbus Day, as will most banks. Most government offices and libraries will be closed. Stores like Walmart and Target and most grocery stores are open.

In some cities, like New York, trash and recycling collection are suspended.

How do Indigenous groups feel about the day?

Activists in cities across the country like Denver and Seattle protested Columbus Day for years and in many cases fought to gain recognition for Indigenous Peoples’ Day. Unofficial celebrations of Indigenous cultures on that day have also taken place, including on New York’s Randalls Island.

The Navajo Nation, the nation’s largest tribe with nearly 400,000 people, has long voiced its support for the renaming of that day. “Transforming Columbus Day to Indigenous Peoples’ Day will encourage young Navajos to have pride in the place and people they come from and the beauty they hold within,” Jonathan Nez, the president of Navajo Nation, said in a statement before Mr. Biden’s announcement.

However, some say mere observance of the day doesn’t do enough, and point out that no American president has explicitly apologized for the country’s treatment of Indigenous peoples. Others call it an important first step.

“I think it really recognizes that Indigenous people are still here,” said Alannah Hurley, executive director of United Tribes of Bristol Bay, a consortium of Indigenous communities in Southwest Alaska, and a Yup’ik fisherwoman in Alaska. “We just have been struggling for so long for the vast majority of mainstream America and culture to recognize that — that we are not just in history books.”

She added, “We’re still fighting for our lands and our waters and our way of life. That visibility is huge, because we have struggled for so long with being made invisible by mainstream society.”

What are some of the major issues Indigenous peoples face?

Supporters of the day say it may help bring attention to some of the ways Indigenous peoples are discriminated against and are disproportionately affected by climate change, gender violence and health issues, as well as to the Indigenous lands affected by mining, drilling and both public and private projects.

Audra Simpson, professor of anthropology at Columbia University, points to “the pipelines and fracking projects running through our territories” and “the ongoing and disproportionate violence directed at Indigenous people, especially women, girls and trans,” she said.

Interior Secretary Deborah Haaland, the first Native American to hold that post, had made that violence a priority with the establishment of a Missing and Murdered Unit within the Bureau of Indian Affairs, Ms. Simpson noted.

Ms. Hurley’s organization of 15 tribes has been fighting the construction of the Pebble Mine, a copper and gold mine in a major salmon fishery that Indigenous communities say would pollute the Bristol Bay in Southwest Alaska.

“There is much greater attention — media attention, public attention — paid to Indigenous peoples’ struggles and value than was the case 50 years ago,” said Jonathan Mazower, communications director for Survival International, an organization that works with and champions the rights of Indigenous communities around the world.

What about Italian Heritage Day?

Some Italian communities have called for a day separate from Columbus Day to celebrate their heritage, as Columbus Day originated partly as a response to anti-Italian sentiment. It was designated a national holiday in 1934, and in 1971 the government declared it a federal holiday to be celebrated the second Monday of each October.

New York City schools tried to compromise this year by labeling the day as both Indigenous Peoples’ Day and Italian Heritage Day, nixing the Columbus Day title. There are still large Columbus Day and Italian heritage celebrations around the country, including the long-running parades in New York and the San Francisco area.

Mr. Biden issued a separate proclamation on Friday for Columbus Day, writing about the “millions of Italian Americans” who “continue to enrich our country’s traditions and culture and make lasting contributions to our Nation.”

A Proclamation on Indigenous Peoples’ Day, 2021