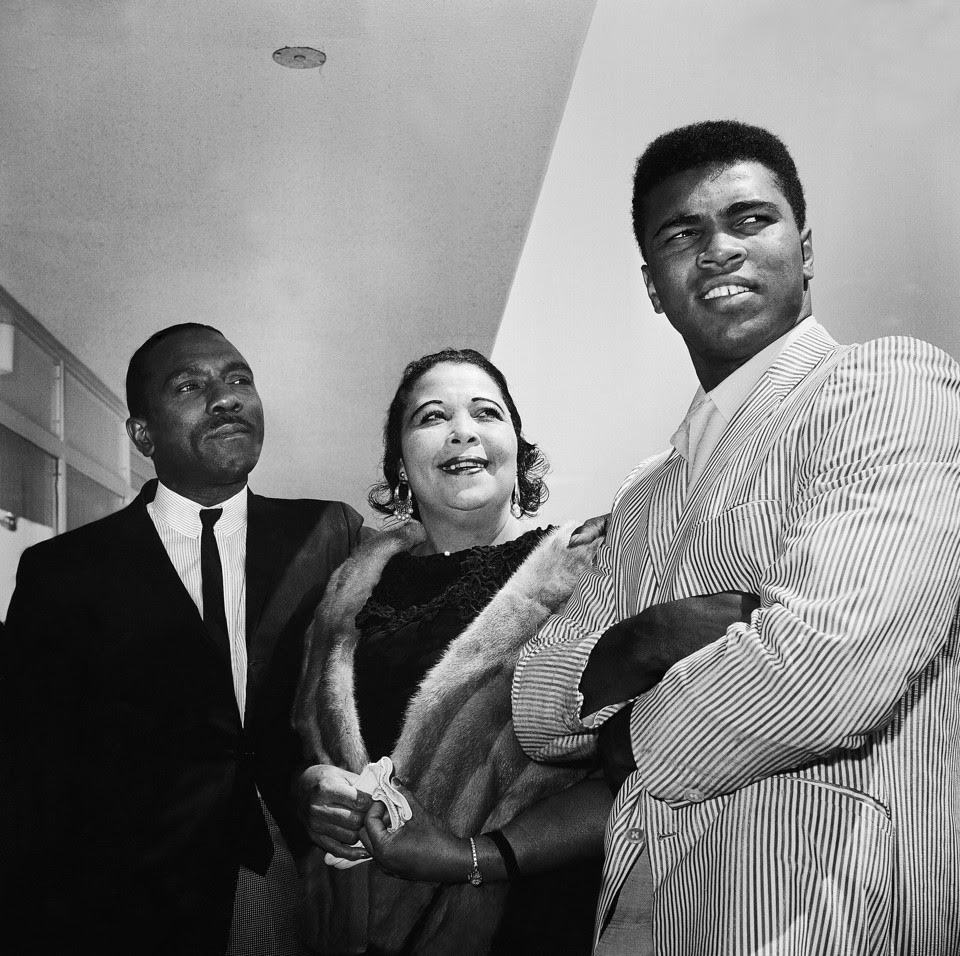 Muhammad Ali and the Importance of Identity

You Are Here: Home » Blog » Editors' Choice » Muhammad Ali and the Importance of Identity

Muhammad Ali with his parents. AP

By Gillian B. White

All the things that my father loved and admired about Muhammad Ali were the things my grandfather despised—or, perhaps more aptly, feared.

If you talk to my dad long enough about his childhood, he will inevitably bring up Muhammad Ali. He talks about the boxer in a way that he talks about few other athletes or entertainers. My dad isn’t really much of a “fan,” he’s not into celebrity or hero worship. But, for him, Ali’s approach to his sport, to politics, to his beliefs, and to what it meant to be a black man in America was momentous.

“Ali changed everything for me,” my father said to me Saturday morning when I called to talk to him about Ali’s death. “I realized if people were going to notice me for being different, I wanted to really give them something to notice.”

He loved Ali’s quick wit, his confidence, and the way he could back it all up. In the 1960s, the world that my father inhabited was just starting to diversify. Black and white kids could talk to each other, go to school together. But the behavior and boundaries considered acceptable for a young black man were still stifling. He grew up in Indiana—a hotbed of Klan activity. While he enjoyed relative safety in Indianapolis, the growing calls for equality during his childhood only inflamed racial tensions in other parts of the state. When he traveled, he still had to be mindful of which bathrooms he used, of where he tried to buy a meal. Even as demands for equal treatment gained strength, a black man courting attention, bragging and taunting and wearing his blackness proudly, was a rarity.

That rarity set him at odds with his own father. Ali’s methods were unsettling to my grandfather, who was born in 1890, only 25 years after the end of the Civil War and slavery. His understanding of race relations were born in the South during the height of Jim Crow, when violence and terror were the norm. Being acceptable or at least inoffensive to white people wasn’t a matter of preference—it was a matter of survival.

For my grandfather, the realities of this country and its potential for brutality were clearer and more deeply entrenched than they were for his son, who was just reaching adolescence. Hismemory of what this country could do to a young, brash black men was longer and sharper than my dad’s. He could also readily remember the brutality that had happened not-so long ago: Emmett Till, the young black boy murdered when his own black boy was just a toddler.

Grandad’s distaste for Ali was part an old-school rejection of a young man who talked too much, but it was also the fear that the result of Ali’s braggadocio could be a squashing of the progress blacks had made thus far. In Indianapolis my grandfather could earn a respectable living, he could buy a home and a car, and take care of his family. He could provide a modicum of safety and security for his family, and surround them with other black people who were doing well too. But he knew that safety could be fleeting and precarious in this country, and feared what a black man invoking the ire of white society could mean. The result was a complex generational rift. Ali and his persona were one of the few things my dad and grandfather fought about.

It wasn’t just Ali’s pride, it was his pride about who he was—black, Muslim—at a time when society didn’t encourage men like him to have any pride or voice at all, that really struck a chord with my father. Whether or not he agreed with his views on Vietnam or refusal to fight did not matter. At a time when black men were supposed to apologize and accommodate, to simply keep their heads down and do as they were told, Ali’s push to stand up for himself and his beliefs was invigorating. While my father’s childhood included vivid memories of segregation, of racial violence, of the fight for basic rights, they also included the hope that one day this country would be a more equitable and welcoming place for people like him. Ali’s radicalism could help make that hope, reality, he thought.

Until I talked to my father Saturday morning it wasn’t clear to me how much his lessons from Muhammad Ali informed who he was, and how he taught my brother and I to maneuver in this world. Ali’s boldness inspired my father to push for a life bigger than the one that had been imagined for him. To leave Indiana for a state he had never been to, to go to a fancy East Coast school and figure out life on his own terms. It’s what helped inspire my dad’s dreams for his kids—to be black and excellent, and to wear both proudly and without fear.

Ali did not transcend race. His singular life and achievements can never be divorced from his identity as a black, Muslim man. He forced America to wrestle with an iteration of black excellence that wasn’t quiet, or ashamed, or defined by white people. By defining himself through word and deed, Ali taught other black people that they could, too.