‘Not a backward call for handouts’

You Are Here: Home » Editors' Choice » ‘Not a backward call for handouts’ 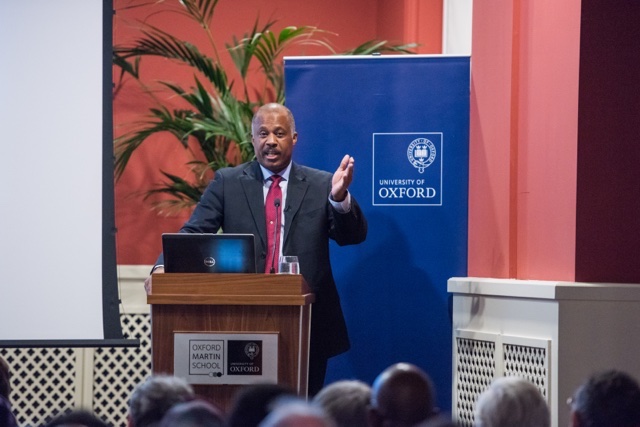 THE chairman of the Caribbean Community (Caricom) Reparations Commission, Sir Hilary Beckles, says Caribbean countries are not looking for “handouts” in their call for reparatory justice, and has presented a 10-point plan to deal with the issue.

Sir Hilary made the distinction while speaking at a public lecture on ‘A Model for Reparation’, organised by Oxford University, in England last week.

[It is not a] backward call for handouts. “It is a renewed call for development co-operation between Britain and the Caribbean. It’s about Britain making a long-overdue contribution to the economic development of the Caribbean through investments in areas such as education, health care, agriculture reform, technology and science to transfer through the universities and colleges. It’s about debt abandonments since the governments of the Caribbean have used up their scarce resources desperately trying to clean up the colonial mess Britain left behind, such as rampant illiteracy, poor health care, horrible housing, and backward attitudes to development,“ Sir Hilary argued.

“Britain abandoned its financial obligation, and the Caribbean citizens and governments had done very well with self responsibility, but the time has come for Britain to honour its legal and moral obligation to the Caribbean. Every finance minister in the Caribbean should stand with the reparations movement and jointly call upon Britain to facilitate economic development and recovery since as PM [David] Cameron said, the Caribbean has been neglected for 30 years after 300 years of wealth extraction,” he added.

Sir Hilary also met at the House of Commons with a cross section of political leaders and civil society organisations to explore how they can best support Caricom’s call for reparatory justice for African enslavement and native genocide. The meeting was a follow-up to Sir Hilary’s speech on reparations before the British Parliament last year.At at the lecture at Oxford, hosted by Professor Louise Richardson — Oxford’s new vice-chancellor — Sir Hilary said that Britain should establish a faculty like the Jewish Reparation Fund which “drives Israeli development works projects”. He said a Caricom Reparation Fund could receive reparations for development purposes and fund projects for the people of the Caribbean.

He said that Britain had a responsibility to the citizens of the Caribbean to right the wrongs of slavery by paying reparation. “It is a vital step in the racial and political healing process,” he declared.

Noting that “blacks are the only people who have received no reparations for crimes of slavery”, Sir Hilary said urgent action was required to repair damage facing the region such as the debt crisis, poor health and literacy ratios, institutional poverty, food insecurity, unemployment and more.

Sir Hilary’s lecture comes at a time when students at the world-famous Oxford University have been campaigning for more curriculum diversity, greater diversification of the student body, and an increase in the employment of non-white staff, both at the academic and administrative levels.

In its invitation letter to Sir Hilary, the university said, “there is a need for a more serious discussion about reparations and curriculum diversity at Oxford”.

Recently, the students successfully challenged the Oxford Union (a private debating club) to examine its own institutionalised racism after a reparations debate that involved the selling of a cocktail called ‘colonial comeback’.

Last year, Oxford held a joint summit where University staff, members of the student union and the student-led Campaign for Racial Awareness and Equality discussed issues raised by students and agreed on a set of concrete steps, including substantial work to review its curriculum in several subject areas with an eye to ethnicity and diversity, working in consultation with minority ethnic students.

Meanwhile, a group of scholars/activists in Britain is mobilising their peers to sign a statement calling on PM Cameron to launch a Commission of Inquiry into the histories and legacies of British colonialism and the British Empire.