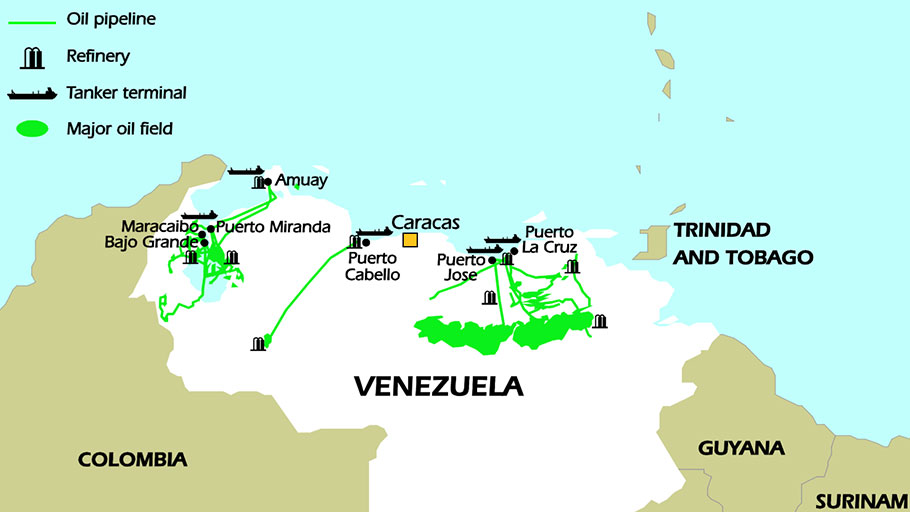 Hugo Chavez was named the fourth most influential person of 2005 in the world by Time magazine. Why is the leader of a relatively small country and economy like Venezuela such a powerful influence in the world? Oil has played a vital role in Chavez’s ability to execute his ideas, and is crucial to his countries identity. Chavez’s leftist idea of bringing greater economic and social equality to South America leveraged by oil has met strong opposition among strong industrialized nations such as the US. These forces have made numerous attempts of seizing his power. However, Chavez has been able to combat this opposition with the popular support of his people. Chavez has also labored diligently to build strong coalitions between world powers willing to go against historical imperialistic influences such as the US, the World Trade Organization, and the International Monetary Fund. This paper will explain the historical and current events influencing Chavez’s manifestation of a complete Bolivarian social and economic revolution.

The presence of oil was known in Venezuela even before the Discovery of the Americas in 1492; back then, Indians were aware of the existence of hydrocarbons that appear on the surface of their lands. They used them for medicinal and illumination purposes. Also, they collected oil from small creeks near seepages by impregnating blankets and then wringing them out. They also found asphalt, and they used it for caulking their canoes and impregnating the sails of their boats.

In 1499 Spanish conquerors were impressed with the natural occurrences of hydrocarbons in Venezuela. They learned from Indians to use them for medicinal purposes. They also used it for caulking their ships, illumination and lubricating their weapons.

On September, 1535, Gonzalo Fernandez de Oviedo y Valdes for the first time mentioned Venezuelan oil seepages in his “General and Natural History of the Indies”.

He called it “the nectar from Cubagua” describing this substance as very useful to treat gout and other diseases.

In September of 1536, the Queen of Spain, Joanna, ordered officials who were in charge of Nueva Cadiz in Cubagua Island, to bring to Spain as much as possible “oil petroleum”. So in 1539 the first documented shipment of petroleum was sent to Spain in the Santa Cruz ship. The main reason for the Queen’s request was to alleviate the gout of Emperor Charles V.

By 1783, King Charles III of Spain dictated the Mining Ordinances for New Spain where mines were declared property of the Royal Crown, although the King can grant mining concessions. This included “any other fossils, be they perfect or semi-minerals, bitumens, or juices of the earth”.

After the Independence of Venezuela in 1811, Simon Bolivar, the Liberator and President of the Great Colombia, dictated a decree in Quito where he reiterated the national ownership of mines of all kinds. Two years after Simon Bolivar’s death in 1830, Bolivar’s decree was ratified by the Venezuelan Congress.

Later in 1878 in Venezuela, the first oil company was founded called “Compania Nacional Petrolia del Tachira” by Antonio Pulido. He asked the government to explore a 100 hectare parcel in the Venezuelan Andes. At the beginning, the oil was collected in buckets, but in 1880 they began to drill wells with a drilling rig imported from Pennsylvania.

In the next thirty years concessions were granted to small entrepreneurs and foreign companies to explore asphalt in Zulia State and other small regions of the country. At that time, Venezuela was known more for its agricultural production than for its oil production. In fact, Venezuela was an underdeveloped country with several political problems.

In 1908 General Juan Vicente Gomez took power to become the strongest dictator of the 20th century with 27 years in office. He opened the gate to foreign oil investors. In 1909 he granted to John Allen Tregelles, a British company representative, the rights to explore twelve of the twenty states of Venezuela. John Allen Tregelles founded a company called “The Venezuelan Oilfield Exploration Company” which had a lease of approximate of 27 million hectares. However, in 1911, Gomez revoked the concession because it was not giving him enough revenues and royalties.

Later Gomez gave almost the same concession to Rafael Valladares who formed the Caribbean Petroleum Company. This company made several million dollars exploring oil and asphalt on the Lake of Maracaibo. In 1913 the concession was transferred to a British-Dutch operator, the Royal Dutch-Shell Oil Company. This was the beginning of the modern economic history of Venezuela.

World War I was the trigger introducing Venezuela into the world oil market. After 1919, the investment and the exportation of Venezuelan oil increased tremendously. By 1922, Venezuela became an important supplier of oil in the world, and biggest reserves of oil were discovered in the Lake of Maracaibo. During World War II Venezuela was the most secure provider of oil to the United States.

In September, 1960, The Organization of the Petroleum Exporting Countries (OPEC) was created in Baghdad, Iraq. The countries that formed the organization at that time were Iran, Iraq, Kuwait, Saudi Arabia and Venezuela. Then eight other members joined the organization: Qatar (1961); Indonesia (1962); Socialist Peoples Libyan Arab Jamahiriya (1962); United Arab Emirates (1967); Algeria (1969); Nigeria (1971); Ecuador (1973-1992) and Gabon (1975-1994). As it was mentioned in the OPEC declaration of 1960, “OPEC’s objective is to co-ordinate and unify petroleum policies among member countries, in order to secure fair and stable prices for petroleum producers; an efficient, economic and regular supply of petroleum to consuming nations; and a fair return on capital to those investing in the industry”.

Although OPEC was created in 1960, it was not until 1973 when OPEC became powerful and started to set the oil’s price. Also, their members took control of their domestic petroleum industries, so the price of oil produced and exported was determined by the OPEC members. At the same time, in the 1960’s Venezuela implemented a policy of “no more concessions” which was the beginning of the nationalization of the oil industry.

In January 1, 1976, President Carlos Andres Perez signed the law that reserved the government the industry and the commerce of hydrocarbons in Venezuela. The same day “Petroleos de Venezuela S.A. (PDVSA)” (Oils of Venezuela) was born as the company in charge of planning, coordinating and supervising the oil industry.

During its first year, PDVSA began operation with its three affiliates called Lagoven, Maraven and Corpoven. That year PDVSA produced 2.3 million barrels per day of oil and the investments were multiplied by four.

In the 1980’s, PDVSA was considered as a reliable oil supplier, and it was consolidated as one of the most important oil companies around the world. In the middle 1980’s, PDVSA began to buy refineries in Europe, United States and the Caribbean. Specifically, it started operations in Ruhr Oel (Germany), Nynas (Sweden and Belgium) and Curacao Island.

Moreover, in September, 1986, PDVSA bought Citgo, in Tulsa, United States, which became be the most important way to sell hydrocarbons in the US. Currently, Citgo has more than a thousand gas stations and occupies more than 20% of gasoline market in the U.S.

In the 1990’s the company started a program of operation agreements that gave the opportunity to foreign companies to explore and produce oil in inoperative oil fields. At that time more than 20 companies around the world applied for these agreements. Between 1993 and 1996 PDVSA began the first three rounds of operation agreements. This brought an investment of more than 2 billion dollars and increased the oil production by 260,000 barrels per day.

In January, 1998, the three affiliates that formed PDVSA for more than 20 years, Lagoven, Maraven and Corpoven, merged. The main goal was to create company with a unified goal to generate the highest revenues. Consequently, three divisions were formed PDVSA Exploration and Production, PDVSA Manufacture and Marketing, and PDVSA Services.

PDVSA has a production capacity of 4 million barrels per day (BPD); actually its production exceeds 3 million BPD and 8.81 billion standard cubic feet/day of gas. Also, PDVSA is among the leading corporations in the refining business, with a petroleum processing capacity of 3,285,000 BPD (1,285,000 BPD in Venezuela and 2 million BPD outside the country) through 24 refineries: six complexes in Venezuela, one in the Caribbean, eight in the United States and nine in Europe.

Moreover, PDVSA generally exports 93% of its total hydrocarbon production. Approximately 54 % of these hydrocarbon exports go to the U.S. and Canada. Just to the U.S. PDVSA exports 1.5 million BPD. In 2010, PDVSA is planning produce 5 million barrels per day of oil with an investment of more that 43 billion dollars from private and public sectors.