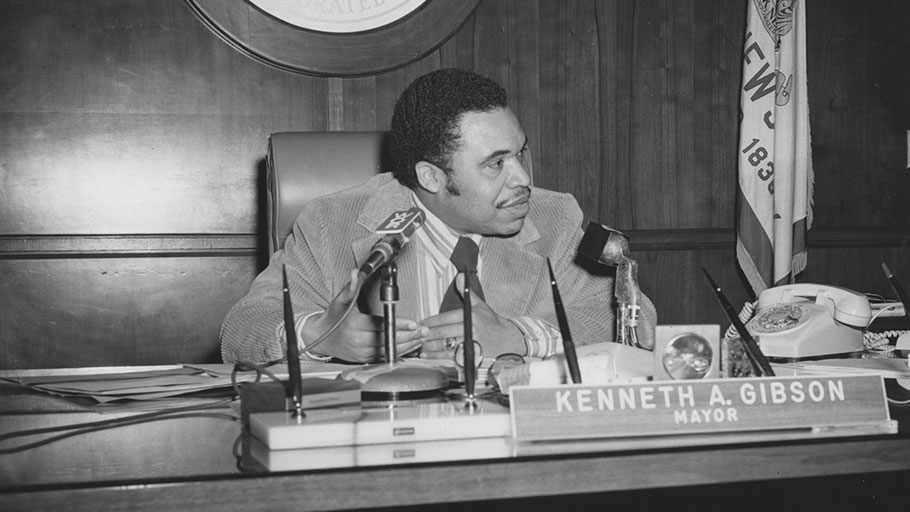 Police Power and the Election of Newark’s First Black Mayor

Fifty years ago, Newark, New Jersey, elected its first Black mayor—Kenneth Gibson—at a moment when there was an urgency to address police violence. Three years earlier, the 1967 Newark Rebellion, which began in response to the police beating of a Black cab driver, resulted in dozens of deaths—including two children—at the hands of police and the National Guard. Police violence was nothing new for Black Newarkers. For years the Newark Police Department had earned a reputation for the violence it meted out to Black and Puerto Rican citizens. But the city had never before experienced police violence on such a scale as in 1967.

In the aftermath of the Rebellion, activists worked tirelessly to counter police violence. Some came to the conclusion that in order to rein in the racist, out-of-control police department, they needed to go beyond street protests. Many of these activists believed that countering anti-Black police violence in Newark necessitated electing Black city leaders who would be more sensitive to the experiences of Black residents. Activists saw electing Black and Puerto Rican city council members, and especially a Black mayor, as the most effective means of bringing the Newark Police Department (NPD) to heel. Their experience, however, illustrates the pitfalls of relying on electoral politics to solve the problem of police violence.

Newark at the time had a majority Black and Puerto Rican population, yet was governed by an entrenched white political machine and patrolled by an overwhelmingly white, mostly Italian-American police force. Black activists concluded that if they could harness the electoral strength of the Black and Puerto Rican community, they could dislodge the white political machine, elect sympathetic Black officials, and gain control of the police department. Speaking to a reporter months after the Rebellion, Amiri Baraka, the great poet and activist, explained his movement from protest to electoral politics, saying, “We’ve come to the conclusion that the city is ours anyway, that we can take it with ballots.” 1

In the 1970 mayoral election, Kenneth Gibson campaigned to unseat the incumbent mayor Hugh Addonizio. Gibson, a city engineer, had a reputation as a political moderate. His campaign messaging focused on competence and a return to good, responsible governance after the rampant corruption of Addonizio’s administration. But, as the wounds of 1967 still festered, activists and Black radicals kept policing at the center of the campaign.

Baraka, with his usual rhetorical flair, laid out what was at stake in the election. “Newark is in the control of an Italian nationalist army called the police department,” he declared, evoking images of Black Newark as a colonized people living under the ever-present threat of police violence. “We are moving in Newark to gain our political control, not because we are interested in American democracy,” Baraka continued, “but because we are interested in black survival. We are trying to control the police.”

Pro-Gibson flyers distributed widely throughout the city picked up on this theme, depicting the election as a fight for survival against the forces of “law and order.” One such flyer featured an image from the 1967 Rebellion of a Newark police officer with a smoking gun in hand, standing over the body of a Black child. “Register & Vote! Never Let This Happen Again!” the flyer implored.

Gibson—a moderate, liberal technocrat—was a strange bedfellow for Black radicals like Amiri Baraka. Gibson’s proposals for addressing police violence adhered to a liberal law and order framework of reform. He did not seek to curtail police power in any way. For Gibson, the problems with the police stemmed from poor training and a lack of mutual understanding and rapport between citizens and the police. To fix these issues, he proposed increasing contacts between police and Black residents through community policing strategies as well as hiring more Black and Puerto Rican officers to bring the department more demographically in line with Newarkers themselves. 2

This moderate menu of reforms was a far cry from the more fundamental transformation sought by activists in Newark, who aimed to completely dismantle the anti-Black racism endemic to policing. But activists believed that Gibson could be influenced to adopt a more radical vision for change. They held out hope that “somehow we could change him, that the movement which he was riding would penetrate and transform him.”

Despite Gibson’s moderate nature, NPD officers saw the prospect of a Black mayor as an existential threat to their authority and they mobilized to put a stop to it. A group of officers calling themselves the Concerned Police Committee stoked opposition to Gibson within the department. They cautioned fellow officers that if Gibson were elected “many of our powers will be restricted,” and a Civilian Review Board to investigate complaints of police misconduct “will be forced upon us.” Police Director Dominic Spina warned voters that a Gibson victory would lead to “anarchy” and cause white police officers to resign en masse. 3 These fears illustrate the extent to which police officers themselves shared activists’ belief that a Black mayor would mean the end of police impunity.

Despite the best efforts of the Newark Police Department, Gibson defeated Addonizio handily, a victory that observers attributed to growing Black voting strength, the successful get-out-the-vote effort spearheaded by Baraka, and the unpopularity of Addonizio, who’d been indicted on corruption charges in the midst of the campaign.

Newark was not unique. Dozens of cities elected Black mayors for the first time in the early 1970s. In many cases Black radicals formed coalitions with Black and white liberals in order to elect Black candidates. Too often, though, trading activism for electoral politics blunted the force of radical visions for change. This was particularly true in the area of policing.

Once in office, Kenneth Gibson failed to live up to the expectations of many of his supporters. He did not, ultimately, usher in a new era of police reform and accountability.

During Gibson’s first year in office, police brutality actually got worse. The city was inundated with complaints of police brutality against Black and Puerto Rican citizens. Rumors circulated that a cabal of officers aimed to embarrass Gibson by beating Black citizens. Several officers told the Washington Post that some of their fellow officers were essentially engaged in a conspiracy to undermine Mayor Gibson by brutalizing his supporters. But Gibson remained silent on the issue. Less than a year after his election, the New Jersey American Civil Liberties Union publicly criticized the mayor for not doing more to address the rising tide of police violence.

Each time the police brutalized Black citizens, Gibson stood by the department. In fact, while Gibson did push for the department to hire more Black officers, he did little else to stem the onslaught of anti-Black police practices. If anything, his reticence on the issue amounted to a tacit endorsement.

Gibson’s failure on this score proved deeply disillusioning for Baraka and others. After Gibson defended the police who beat the Central Ward sanitation marchers, Baraka finally broke with the mayor, condemning him as a “Reactionary tool of neocolonialism.” The split between the two former allies was complete and final.

The Newark example serves as a cautionary tale for activists today. Righteous demands for accountability and justice had seemed victorious as Newark’s first Black mayor was sworn into office that hot summer day fifty years ago. But as activists celebrated their hard-fought victory, police power—far from retreating in the face of a rising tide of Black political power—reasserted itself in new ways. As beatings and quotidian acts of disrespect and brutality persisted in the Gibson era, the police message to Black Newarkers seemed to say: a Black mayor will not protect you, this is still our city. Newark’s experience cautions today’s activists to be wary of channeling the urgency, the radicalism, the moral authority of this current moment into electoral politics. In Newark’s case, this strategy proved woefully inadequate to the problem at hand.

Andrew Grim, a PhD candidate in the Department of History at the University of Massachusetts Amherst, is at work on a dissertation on anti-police brutality activism in post-WWII Newark, New Jersey. Follow him on Twitter @andyleegrim