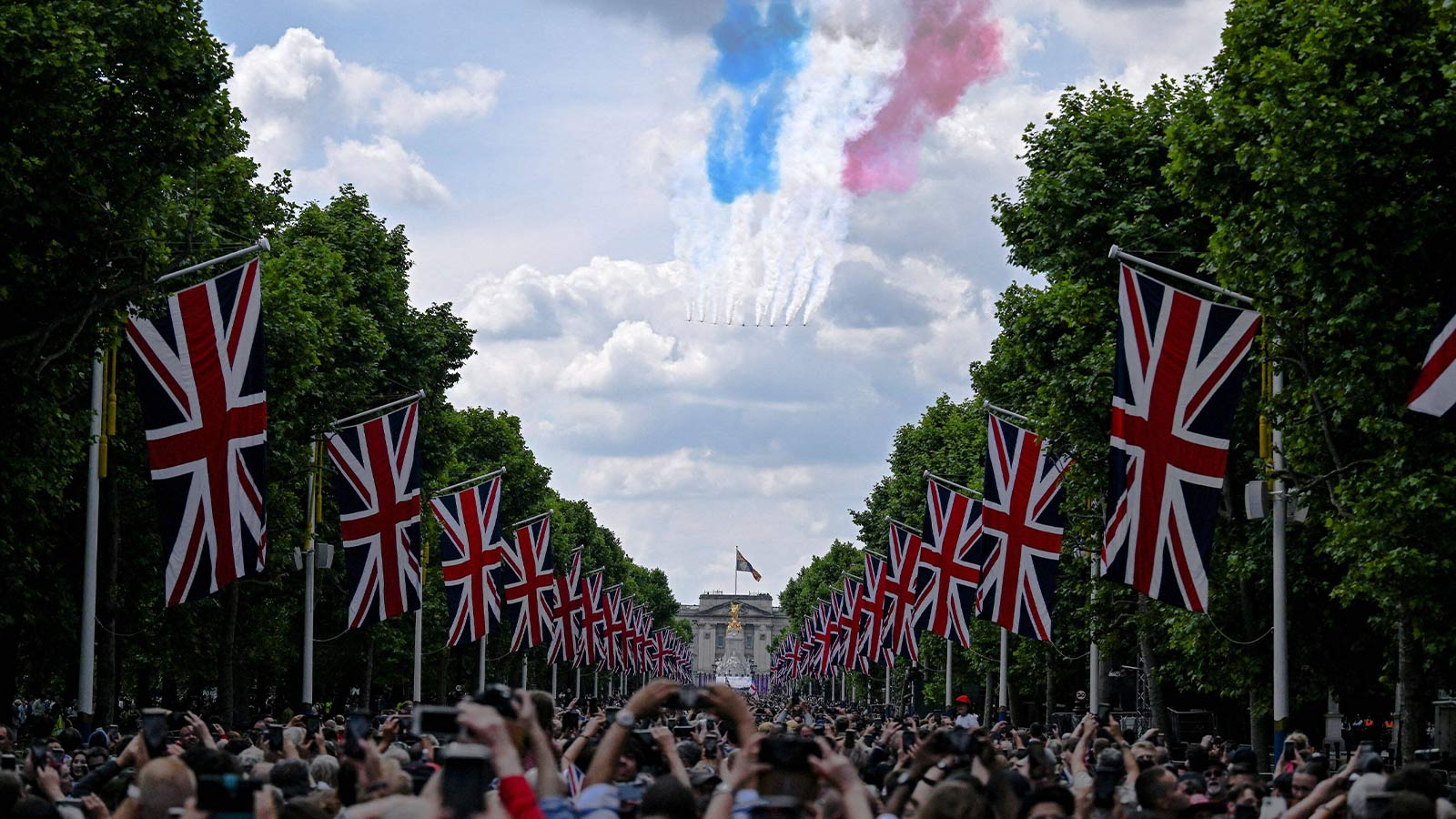 The Queen’s jubilee can’t shake the ghosts of empire

You Are Here: Home » Blog » Editors' Choice » The Queen’s jubilee can’t shake the ghosts of empire

From the moment she acceded to the British throne, Queen Elizabeth II was part of an imperial story that extended far beyond Britain’s borders.

When Queen Victoria celebrated her diamond jubilee in 1897, it marked the apex of British power on the world stage. Six decades since she had ascended the throne, Victoria, then half-blind and generally infirm, was at the top of an imperial chain that wound its way across every continent, binding together a quarter of the globe under the suzerainty of the British crown.

That world-spanning scope got represented in the ceremonies that unfurled across London. A multiracial army of 25,000 soldiers — featuring detachments from, among other places, India, the Natal in South Africa, and the far-flung islands of Trinidad and Malta — camped out in Hyde Park ahead of the jubilee parade, while some 3 million people journeyed to London for the festivities. Regiments of turbaned Sikhs and Canadian Mounties all marched in procession along with the carriages of Indian princes and the delegations of 11 colonial prime ministers.

“No one ever, I believe, has met with such an ovation as was given to me, passing through those 6 miles of streets,” wrote Victoria in her own diary. “The cheering was quite deafening & every face seemed to be filled with real joy. I was much moved and gratified.”

Mark Twain, a visiting Yankee not quite at Victoria’s court, grasped something deeper about the rapture of the crowd. At the time, Britain’s Parliament and its elected politicians already held greater daily control over matters of state. But Twain saw, through all the pageantry, the almost visceral link between the monarch and the many lands at her feet. The entire purpose of the jubilee in Victoria’s honor was as an ideological spectacle, a showcase of imperial preeminence.

“It was realizable that [Victoria] was the procession herself, that all the rest of it was mere embroidery; that in her the public saw the English Empire itself,” Twain wrote.

There’s no shortage of pomp and circumstance this week as Britain commemorates Queen Elizabeth II’s Platinum Jubilee. On Thursday, 1,400 troops in bearskin caps and an Irish wolfhound named Seamus filed past Elizabeth’s Buckingham Palace balcony. Seventy aircraft from the Royal Air Force carried out a noisy flyover. A four-day holiday weekend in Britain will see a surfeit of parties and parades.

But, as the spectacle of Victoria’s jubilee offered a vision of the world’s most powerful polity, the commemorations for Elizabeth’s long rule can’t hide Britain’s much-diminished state.

The sun set long ago on the British Empire, with the exception of a few wind-battered archipelagoes scattered around the oceans. The dozens of independent states that belong to the Commonwealth are, at best, apathetic about their ties to the British crown. And at home, the tangled politics of Britain’s break from the European Union has raised the possibility of the fracturing of the United Kingdom itself.

Far from possessing the epoch-defining power that Victoria did, Elizabeth and her kin now rule mostly over the realms of kitsch and gossip. They live their lives as bearers of centuries of weighty tradition in a far more banal present. To a gawking public, they are objects of curiosity and even pity. Sometimes, they serve as the subjects of excellent prestige television. More often, they are the source of tawdry tabloid intrigues, from the alleged sexual crimes of Prince Andrew to the House of Windsor’s internal family feuds.

Few Britons look to their royals for visions of grandeur and geopolitical might. Rather, their enduring love for the queen — who, opinion polls show, is undeniably popular — is about something far more cozy. “Celebrating ‘queen and country’ is a way for buttoned-up Britons to celebrate themselves, to wrap themselves in the soft patriotism of Union Jack bunting, as they move past the pain of the pandemic and the endless bickering over Brexit,” wrote my colleague William Booth.

But from the moment she acceded to the British throne, Elizabeth was part of an imperial story that extended far beyond Britain’s borders. After all, she learned of the passing of her father, King George VI, while at a wildlife lodge in Kenya, then still a British colony. In the seven decades since, critics argue that she has yet to show much awareness of the misdeeds of the empire for which she remains the ceremonial figurehead, including for the violent campaign of repression carried out by British authorities in Kenya in the 1950s during the anti-colonial Mau Mau uprising.

“To this day, she has never publicly admitted, let alone apologized, for the oppression, torture, dehumanization and dispossession visited upon people in the colony of Kenya before and after she acceded to the throne,” Patrick Gathara, a Kenyan political commentator, told the Associated Press.

In the same AP story, Jamaican academic Rosalea Hamilton explained her position on wanting to remove the queen as her country’s head of state. “When I think about the queen, I think about a sweet old lady,” she said. “It’s not about her. It’s about her family’s wealth, built on the backs of our ancestors. We’re grappling with the legacies of a past that has been very painful.”

Earlier this year, a trip to Central America and the Caribbean by Prince William and Kate, the Duke and Duchess of Cambridge, was marked by protests and scorn. In Jamaica, a letter addressed to the couple and signed by dozens of prominent leaders and intellectuals called for a formal apology from Britain, as well as reparations for its legacy of slavery and colonial exploitation in the region.

“We see no reason to celebrate 70 years of the ascension of your grandmother to the British throne because her leadership, and that of her predecessors, have perpetuated the greatest human rights tragedy in the history of humankind,” read the letter.

Thanks to Britain’s colonial history, Elizabeth remains the head of state of 14 countries outside the United Kingdom. But that number is certain to shrink further. Jamaica and five other Caribbean countries plan to follow the lead of Barbados and cut ties with the British monarchy. And republicanism simmers not far from the surface in major Western democracies like Canada and Australia.

Newly elected center-left Australian Prime Minister Anthony Albanese honored the queen in remarks delivered Thursday, saying that Australians continue to hold her “in respect and affection.” But he added that his country’s relationship with Britain “is no longer what it was at the dawn of [Elizabeth’s] reign.”

Hinting at his Labor Party’s pro-Republican agenda, Albanese said: “No longer parent and young upstart, we stand as equals.”

Equality, of course, is not exactly a principle that co-exists easily with a hereditary monarchy. Should they feel any disquiet about their political arrangement, most Britons will probably suspend judgment at least for this weekend of revelry and good cheer (though there are some notable exceptions).

Elizabeth’s advanced age and deteriorating health suggest that this may be one of the last moments to celebrate her long reign. Given the unpopularity of her immediate heir, and signs of growing anti-monarchism among young Britons, it may also be one of her country’s last royal jubilees.