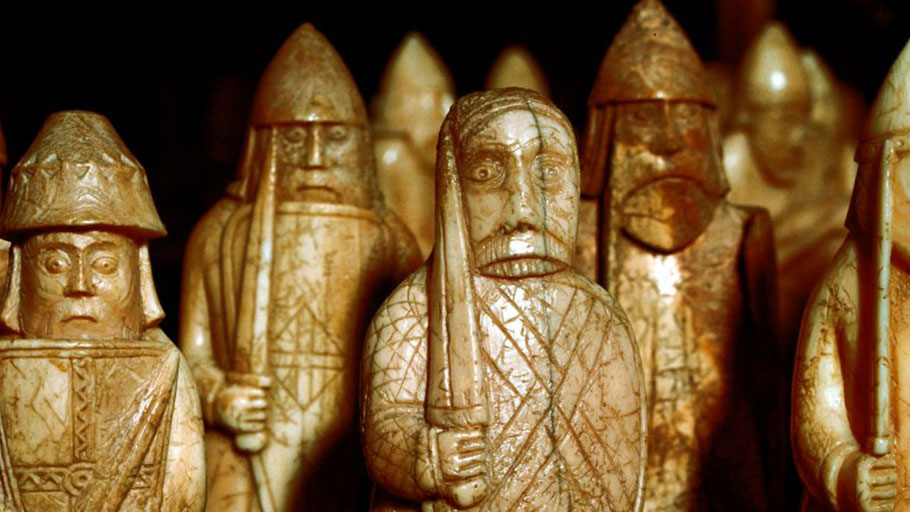 White Supremacists Have Weaponized an Imaginary Viking Past. It’s Time to Reclaim the Real History

You Are Here: Home » Blog » Editors' Choice » White Supremacists Have Weaponized an Imaginary Viking Past. It’s Time to Reclaim the Real History

Real Viking society was multicultural and multiracial. So where does the white supremacist vision of their genealogy come from?

After New Zealand passed new gun laws this week, most automatic and semi-automatic weapons have become outlawed there as of Friday — a swift response to the March 15 shootings in Christchurch that left 50 Muslim men, women and children dead at the hands of an alleged white supremacist terrorist. But guns weren’t the only weapon used by the shooter.

The shootings followed the release of materials some have called a manifesto but that has more accurately been called a “media plan.” In it are multiple medieval references, several involving medieval Vikings, which these days function as a signal to white supremacists. Along with much else from the European medieval world, the Viking past is part of the far right’s standard visual and textual imaginary. That vision of a Viking world depends on contemporary digital and filmic popular culture — such as the TV show Vikings and Viking-adjacent video games — as well as on academic and historical sources.

But far-right Viking medievalism is not about historical accuracy. Rather, it’s used to create narratives. So, to resist the medieval narratives that activate violent hate, we must create counternarratives — and to do that, we must understand the real Viking past and how it has been weaponized.

The term “Viking” possibly comes from the Old Norse word víkingr (sea warrior). As Stefan Brink and Neil Price’s The Viking World describes, historically, it referred to seafaring groups who traversed the seas, oceans and rivers to raid, trade and colonize around the 10th and 11th centuries. They established settler colonies across the Mediterranean, Caspian, Black, Arctic and North Atlantic seas and waterways, maintaining a presence in regions ranging from present-day Russia and Europe to the Americas. Crucially, they were not homogeneous seafarers as is often imagined; they were multicultural and multiracial. But until recently, scholarly discussions of the Vikings in relation to race and a Global Middle Ages had been sidelined.

So where does the white supremacist vision of Viking genealogy come from?

Despite the fact that real Viking history was multicultural, academic medieval studies have historically been to blame for the upholding of that imaginary past.

In the 19th century, Romantic German nationalism metastasized into the Völkish movement, which was interested in historical narratives that bolstered a white German nation state. The movement rewrote history, drawing on folklore such as that of Brothers Grimm, medieval epics and a dedication to racial white supremacy. Late 19th and early 20th-century scholars simultaneously drew from and reinforced this racialized imagination of the medieval past. Crucially, Vilhelm Grønbach’s multi-volume work Vor Folkeæt i Oldtiden (The Cultures of the Teutons) imagined an ancient Germanic genealogy that ran from Tacitus through the Middle Ages.

German scholarly work during the eve of the Third Reich then added to this idea, with authors like Gustav Neckel and Bernhard Kummer blaming socialism, Jews and class revolutions for the “decline” of a Germanic race they saw descending from this Viking past. Another German scholar, Otto Höfler, who based his work on Grønbach, wrote of the Männerbunde, which the scholar Stefanie von Schnurbein has described as “all-male warrior associations in so-called primitive societies.” His take on Männerbund would become used as an explanation of the past and current Germanic race, and fueled the idea behind Nazi groups such as the SS and SA.

After World War II, despite the defeat of the Axis powers, these ideas didn’t go away. Rather, they saw a resurgence in specific circles, including various far-right neo-pagan groups, like the Scandinavian Nordic Resistance Movement, known for their neo-Nazi violence. Grønbach’s multivolume work, translated and available online, and the works of his contemporaries have also influenced current far-right extremists in Europe and North America.

This neo-pagan resurgence intersects with many facets of extremism today, from eco-fascism — another term the Christchurch terrorist invoked — to groups like the Odinists, who practice a form of white toxic masculinity based on the belief that the “barbaric” warriors of medieval Northern Europe functioned as a violent warrior comitatus. Odinists follow a neo-pagan medieval Scandinavian religion that is unacknowledged by the official Icelandic pagan religion, Ásatrú. The man who is accused of attacking two teenage girls (one in a hijab) and murdering Rick Best and Taliesin Myrddin Namkai-Meche in Portland, Ore., in 2017 has linked himself to the idea of “Vinland,” the concept of a Viking North America onto which an imaginary Odinist past has been superimposed.

Nor is this use of Old Norse and Viking “history” limited to specific alt-right subgroups. In fact, it is a generalized social fixture in these circles. For example, when researcher Patrik Hermansson went undercover among the denizens of this world, he attended “gatherings where extremists drank mead from a traditional Viking horn and prayed to the Norse god Odin.” The Viking past contributes to a medieval toolkit of language, allusion and symbolism used to transmit white supremacist messages.

Communities of color have in the past fought white supremacist medieval narratives at the grassroots by spreading their own counternarratives, from W.E.B. Du Bois creating an African-American vision of the medieval past in Dark Princess to the Asian Americans who pushed back against racist medievalism during the period of Chinese Exclusion. Scholars and historians — not just medievalists — must also interrogate their disciplines from the inside, setting the record straight about medieval race and the Global Middle Ages.

So far, however, the most widespread, concerted and effective way to fight back against this historical white supremacist Viking genealogy has come not from academics or journalists.

Rather, it has come from Taika Waititi, the indigenous Maori director and writer. His movie Thor: Ragnarok — in which Thor’s hammer, a medieval item regularly brandished by extremists, is destroyed — was a multiracial and postcolonial counternarrative to the white Viking narrative circulating through the alt-right digital ecosystem. After decades of building up the violent Viking vision, more such stories will be needed to disrupt this medieval machine.

This article was originally published by the Times.

Dorothy Kim is an Assistant Professor of Medieval Literature at Brandeis University. She was a Fulbright Fellow in Iceland.