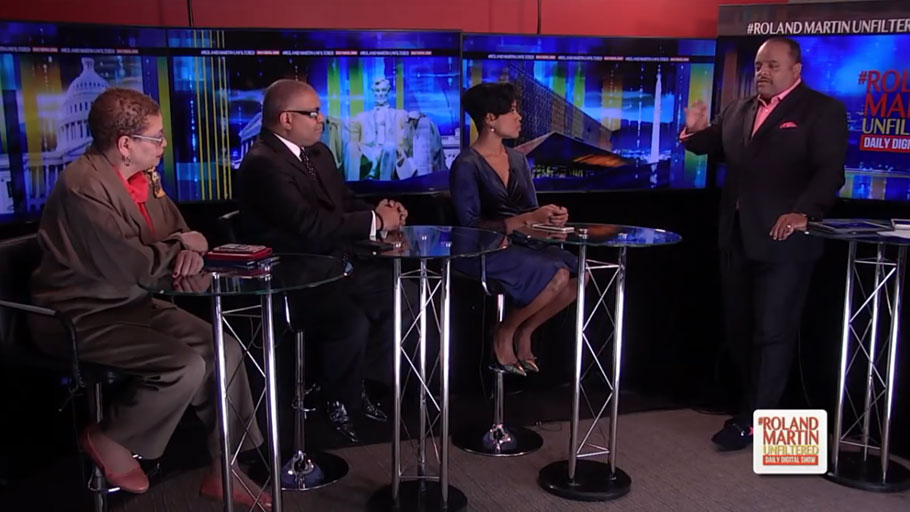 You Are Here: Home » Blog » News & Current Affairs » #RolandMartinUnfiltered is A Black News Platform with the Largest Audience in America

Roland Martin reaches more African Americans each day with news and information using his streaming platform than anyone else in the U.S. Martin, a veteran broadcast journalist who celebrated the one-year-anniversary of #RolandMartinUnfiltered in September, has over 100.7 million views with almost 435 million minutes viewed across YouTube, Facebook, Twitter and Instagram in that short timeframe. Martin believes he is providing a service digitally that is long overdue.

“I understand that African Americans are tired of mainstream media ignoring the many issues impacting us on a daily basis. Therefore, I conduct interviews with newsmakers and I produce and stream content related to criminal justice, health, politics and other topics that are extremely important to the Black community,” said Martin. “I fill the void left by mainstream media’s lack of resources and time to dedicate ongoing coverage of the myriad of issues facing African Americans. In addition, because my news program is streamed, viewers can watch the show anywhere using their tablets, mobile phones and other devices.”

Many are taking note and understand the significance and value of Martin’s efforts. Says National Urban League President and CEO, Marc Morial, “Roland Martin is one of the most important voices in Black America today. His insight and no-nonsense approach to bringing news and opinion to, for, and about Black America is a welcome alternative to the sameness of many other journalists. His voice is respected, vital and essential.”

“We would like to congratulate Roland and his team on a successful first year,” said Derrick Johnson, President and CEO of the NAACP. “Communities of color deserve to hear from their voices – journalists from the community, who are invested in shining a light on the issues that affect the community. Roland Martin has been a steadfast reporter with the utmost integrity, and is an important voice for Black America.”

Adds Melanie Campbell, President & CEO of the National Coalition on Black Civic Participation (NCBCP), “Despite the proliferation of sports, entertainment and news networks and channels in America, there is a tremendous void when it comes to Black news and information. Roland Martin has created a digital news platform that is filling that void. Although it has only been in existence for a year, #RolandMartinUnfiltered has become a critical voice, conduit and source of news and information for the Black community that brings a consistent Black perspective to the issues of the day important to Black America. Roland also provides opportunities for many more Black journalists, scholars, pundits and other experts to bring their perspectives to the news on a daily basis and that is a unique service that the National Coalition on Black Civic Participation is proud to support.”

States Lee Saunders, President of the American Federation of State County and Municipal Employees (AFSCME), “AFSCME is proud to support #RolandMartinUnfiltered because Roland has developed a digital news platform that provides a wide breadth of news and information to the African American community. In many ways, his platform goes well beyond the traditional news coverage that the current television networks and other digital platforms provide. And we are especially glad to see that as part of his ongoing reporting, he also includes news and information about the labor movement’s relevancy within the Black community.”

In August, the Pew Research Center published numbers that show 60% of African Americans still prefer getting their news from television while 25% prefer receiving news online with only 9% choosing radio and 5% print as their news sources. However, as a completely digital platform, and with the fast emergence of streaming technology, Martin is positioning #RolandMartinUnfiltered to be one of the major providers of digital Black news and informational content to the nation. With NBC News and Fox News launching streaming news services in the last year, as well as the digital expansion at CBS News, ABC News, CNN and other networks, Martin says he launched his venture at the right time.

“The numbers of Blacks watching television news reflects an older population of people primarily over 60-years-old,” said Martin. “The people who watch my show via streaming are usually between 18 and 55-years-of-age. We’re developing strategies to attract the Baby Boomers and Millennials to ensure they also receive news from an explicitly African American perspective. I believe more Black consumers are beginning to use digital platforms to receive news and I want #RolandMartinUnfilterd to be their first choice.”