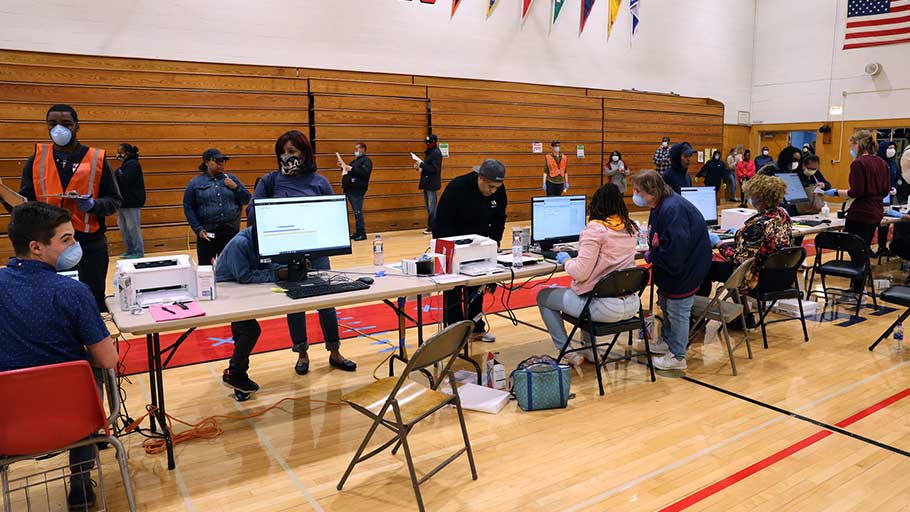 I have never been prouder of the people of my home state than over the last twelve days.

I went to John Marshall High School in Milwaukee, class of 1964. It was after coming home from school one day that I watched on television as non-violent Civil Rights protesters were attacked with dogs and fire hoses in Birmingham, Alabama. A few weeks after I graduated, James Chaney, Andrew Goodman and Michael Schwerner, activists in Mississippi Freedom Summer, were murdered.

It was in those years that the reality of Jim Crow first came crashing home to me: African Americans in the South were risking their lives when they tried to vote.

DÉJÀ VU ALL OVER AGAIN

This April 7, John Marshall High School was one of only five polling places in Milwaukee where people could vote in a bitter contest for a seat on the Wisconsin Supreme Court. The usual number of polling places is 180. Amid the COVID-19 pandemic a severe shortage of poll workers forced the cutback.

The Governor had ordered a postponement of the election, and a district court had ordered an extension of the period when people could request absentee ballots. Republican officials filed suits opposing both measures. The GOP was backed by the Wisconsin Supreme Court and, in a ruling that strained legal logic beyond its limits, the five “conservative” justices of the U.S. Supreme Court approved the Republican suppress-the-vote agenda. Neither of these measures were allowed.

The upshot: in long lines outside my high school, African Americans (and this time others too) again had to risk their lives in order to vote.

A week later there was a sign that they might follow in the footsteps of those whose courage overthrew Jim Crow in the 1960s in another way. The Wisconsin election results were announced, and they won. In a dramatic upset the candidate backed by the those who had placed Wisconsin lives in jeopardy lost by 160,000 votes.

As in the 1960s, the determination of African Americans to vote spearheaded a victory and expanded democracy for all.

A WHITE REPUBLIC FOR 350 YEARS

African Americans in Wisconsin 2020 were not up against unusual circumstances. From this country’s founding in 1619 until the mid-1960, the norm was a white monopoly on political power. Denying voting rights to people of African descent was standard operating procedure.

There were exceptions. Blacks in several pre-Civil War northern states fought for and won a (precarious) right to vote. During Reconstruction (1865-1876), African Americans in the South exercised the franchise and led in the formation of state governments more progressive than any that have existed in the U.S. before or since. W.E.B. Dubois saw them as so infused by working class democracy and pro-worker policies that he termed them a dictatorship of the proletariat. After Reconstruction was overturned by Klan violence and post-Radical Republican GOP betrayal, African Americans in the South still hung on to some elected offices for two decades. Large numbers of Blacks in the northern and western states were able to exercise the franchise and made some dents in white power.

But important as each of these experiences were, they were not defining features of the U.S. polity. In practice — and in the “this-is-the-nature-of-the-country” assumptions of most whites — the U.S was a White Republic.

Squarely facing that reality is necessary to gain a full appreciation of the depth of the 1960 Civil Rights Revolution.

The change went beyond winning long-denied rights for an African American population that had been central to the development of U.S. and global capitalism. The fight for equality, with voting rights at its core, galvanized a popular upsurge that made breakthroughs that threatened to replace the White Republic with a Multiracial Democracy.

The legal fruits of this upsurge were the 1964 Civil Rights Act and the 1965 Voting Rights Act, whose immediate spur was the bloody confrontation on Selma’s Edmund Pettus Bridge and the Selma to Montgomery March.

The upheaval’s driving force was the large, mobilized and strategically positioned Black community. Their struggle within U.S borders was connected to the left-led uprising against Western domination and white supremacy that swept through the Global South; and to the competition for hearts and minds between the U.S. and a then-powerful socialist bloc.

The energy of all constituencies with a stake in equality and peace was unleashed. Youth-led protests revitalized the long tradition of militant struggle in the Puerto Rican and Chicano/a communities. A new Asian American movement took up and meshed the banners previously carried by specific Asian nationality groups. The Native American struggle, the oldest resistance movement in North America, resurfaced in new militant forms. Women acted for liberation in massive numbers and the modern movement for LGBTQ rights was born. These movements and the surge of opposition to the Vietnam War were the entryways to socialism, Marxism and working class organizing for a new generation of revolutionaries.

A host of gains resulted: the end of racist immigration quotas; the enactment of Medicare; a sea change in women’s role in society; the opening of closet doors; Washington’s inability to “stay the course” in Vietnam, and more.

EXPANDING DEMOCRACY FOR ALL

The arc of the 1960s upheaval echoed a recurring pattern in U.S. history, most vividly in the progression from abolitionism through the Civil War to the passage of the 13th, 14th and 15th Amendments. The struggle for racial equality and political enfranchisement not only meant gains for those directly affected. It expanded the range of democratic rights for all, to the special benefit of workers and society’s most vulnerable members.

And it doesn’t stop there. Winning Multiracial Democracy not only means a better life for the 99% in the here and now. It gives us the most favorable platform for building a holistic and inclusive movement capable of challenging and eventually replacing capitalism with working class power.

No wonder the backlash against the gains of the 1960s — especially the crusade to roll back voting rights — began as soon as the defenders of Jim Crow could regain their bearings.

“I DON’T WANT EVERYBODY TO VOTE”

The first step was to reconfigure partisan alignments so that white backlash politics would gain control of one of the two major parties. That was accomplished by Richard Nixon’s “southern strategy” which moved white southerners from the Democratic Party into the Republican column.

The key was finding methods of signaling a commitment to white supremacy without an explicit frontal assault on the concept of racial equality. Top Republican strategist Lee Atwater explained how they did it:

“You start out in 1954 by saying, ‘N-r, N-r, N-r.’ By 1968 you can’t say ‘N-r’ – that hurts you, backfires. So you say stuff like, forced busing, states’ rights, and all that stuff, and you’re getting so abstract. Now, you’re talking about cutting taxes, and all these things you’re talking about are totally economic things and a byproduct of them is, Blacks get hurt worse than whites.…”

Ronald Reagan rode this “dog whistle” script to the White House in 1980. He chose Philadelphia, Mississippi to give his official “I’m for States Rights” speech but didn’t say out loud that he chose this spot because that’s where Goodman, Schwerner and Chaney had been murdered.

Reagan’s backers were not so discreet. At the founding convention of the Moral Majority that same year, Paul Weyrich — right-wing strategist and founder of the Heritage Foundation — laid it all out there to the white Evangelicals who four decades later would become Trump’s core base:

“Now many of our Christians have what I call the goo-goo syndrome – good government. They want everybody to vote. I don’t want everybody to vote. Elections are not won by a majority of people; they never have been from the beginning of our country and they are not now. Our leverage in the elections quite candidly goes up as the voting populace goes down.”

The GOP worked on that premise for the next several decades, gerrymandering and stacking the federal judiciary. Their investment paid off in 2013 when the Supreme Court ruled 5-4 that key sections of the landmark 1965 Voting Rights Act were unconstitutional.

Now it is Donald Trump’s turn and he just puts the line of his dog whistle segregationist forbears a bit more bluntly:

“The things they had in there [the stimulus bill] were crazy. They had things, levels of voting that if you’d ever agreed to it, you’d never have a Republican elected in this country again.”

It’s just the domestic side of Trump’s enthusiasm for governments whose power is maintained by racism across the globe: Modi’s Hindu Fascism in India, Orban’s anti-Semitism in Hungary, Israel’s apartheid regime.

Like their global counterparts, today’s Trumpified GOP sees majority rule — one person, one vote — in a society with a rising proportion of people of color, as an existential threat.

“Make America Great Again” is shorthand for “No to a Multiracial Democracy, Back to a White Republic.”

The experience Wisconsin just went through spotlights that danger. But the victory won indicates it is possible to push the country in the opposite direction.

The racist Court decisions and risk-your-life voting lines sparked immediate outrage. A column by liberal columnist Paul Krugman in the New York Times was headlined “America’s Democracy May Be Dying“; another by Jamelle Bouie was titled Trump Wants 50 Wisconsins on Election Day.

A hundred and fifty Civil Rights groups signed a joint letter demanding Congress fully fund protections for the November elections. Campaigns for vote by mail and other COVID-19 protection measures were launched or intensified by groups long immersed in the voting rights battle: the Brennan Center, ACLU, Fair Fight 2020 led by Stacy Abrams, Fair Vote, Reclaim Our Vote and more. More than 80 lawmakers and 900 organizations have signed on to the Five Principles formulated by the Peoples Bailout, one of which is “Protect our democratic process while protecting each other.”

And when Wisconsin’s unexpected results came in, there was good news across the board.

GOP turnout and the Republican percentage of the vote was down in traditionally conservative suburbs, small towns and rural areas.

Still, the core components of victory were the same as those that led to the breakthroughs of 1964 and 1965: effective grassroots organizing plus courageous action on the part of those most impacted by injustice.

A sophisticated voter turnout and protection campaign by the All Hands Brigade played a key role. (See Portent and Portal: The Wisconsin Election Is Both.) Years of work by Wisconsin Citizens Action across the state showed results. Especially important were the efforts of three organizations embedded in Milwaukee’s Black and Latinx communities: Black Leaders Organizing for Communities (BLOC), Leaders Igniting Transformation and Voces de la Frontera Action.

The New York Times wrote that all this sent a signal that it was possible to “organize and execute a winning get-out-the-vote program against strident Republican efforts to limit voter turnout in a narrowly divided state widely expected to be crucial in this fall’s presidential election.”

The challenge is to accomplish that not just in Wisconsin, but in every state, with particular attention given to the battlegrounds. To block re-establishment of a White Republic and restart forward motion toward a Multiracial Democracy and the potential it offers for going further toward a transformed socio-economic system.

Ousting Trump and the other advocates of Jim Crow 2.0 is how we can carry forward the struggle of those who risked life and limb on the Edmund Pettus Bridge and the streets outside John Marshall High School.

This article was originally published by Organizing Upgrade.