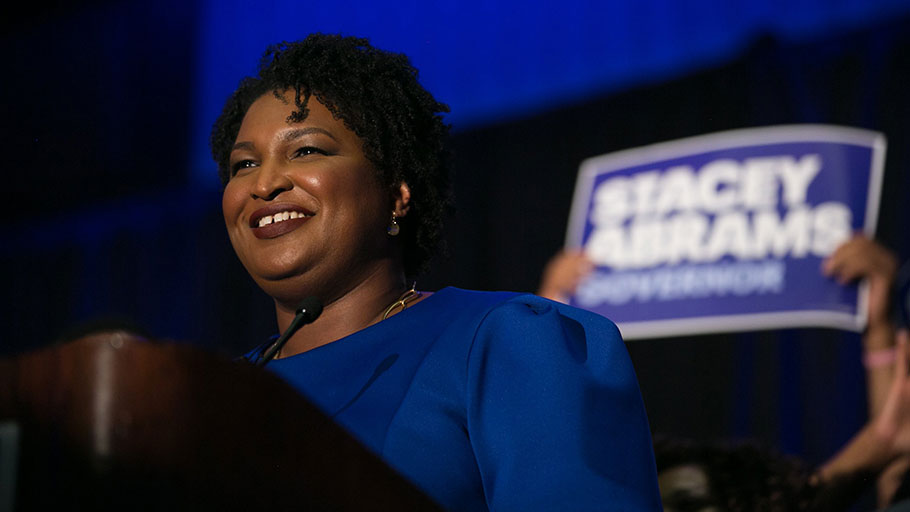 A large network of political groups and outreach initiatives, many of them helmed by black women, backed Abrams in Georgia’s May 22 democratic primary.

On Tuesday night, Georgians voting in the state Democratic primary overwhelmingly backed Stacey Abrams, bringing the 44-year-old former Georgia House minority leader one step closer to becoming the first woman governor of Georgia and the first black woman governor in the US.

But this historic win didn’t happen by accident.

It was the result of months of effort by an increasingly influential network of political groups and outreach initiatives, many of them helmed by black women, that are eager to build political power and influence in black communities.

“Black women are ‘sick and tired’ of being thanked by progressives for being their most loyal voting base. Black women are demanding that the progressive movement show us they respect our leadership and the power of our vote, by investing more in Black women running for office; and Black women-led organizing and institutions,” Melanie Campbell, president and CEO of the National Coalition on Black Civic Participation and the Black Women’s Roundtable, said in a statement hours before polls closed on Tuesday.

Campbell’s group was one of several taking part in an effort called the Unity ’18 Campaign, which aimed to mobilize some 100,000 black women ahead of the Georgia primary.

Throughout her campaign,Abrams frequently highlighted the historic nature of her candidacy, and noted that she wanted the party to better help black women, who make up a sizable portion of Georgia’s electorate. It was a message aided by the endorsement of several national political figures, including California Sen. Kamala Harris, former Obama adviser Valerie Jarrett, and others.

“As we look at stopping the rollbacks of the past 50 years of progress that are happening at the state, local, and federal level, we need more progressive voices in legislative bodies and in executive chambers,” Kimberly Peeler-Allen, the co-founder of Higher Heights for America, a national organization that works to get more black women involved in politics, told me in January. “The best way to do that is to elect black women.”

After Tuesday’s contest, it’s clear that the mobilization of black voters, and black women voters in particular, helped propel Abrams into the Georgia nomination. And these groups could play a major role in other contests in 2018 and beyond.

Abrams, who focused on issues like health care and spoke frequently about the importance of helping marginalized groups,beat Stacey Evans, a state legislator who campaigned largely on promises to restore a state scholarship program that helped high-achieving Georgia students.

But for the most part, as Vox’s Matthew Yglesias explained, the differences between Abrams and Evans were more rooted in tactics than in policy.

Evans emphasized the importance of persuading moderate Republicans and more conservative Democrats to vote for Democrats,while Abrams stressed the importance of reaching voters of color who sat out recent political contests. In the end, Abrams won 75 percent of the vote.

The Abrams-Evans primary race drew national attention, coming at a time when the Democratic Party is still figuring out how to engage voters ahead of the 2018 midterms. It also brought up the issue of race: High black voter turnout, with especially strong support from black women, has helped Democrats win recent contests in states like Virginia and Alabama.

As the Associated Press’s Errin Haines Whack put it earlier this week, Georgia’s election “presents black women voters with a rare opportunity: To give a Democrat who looks like them a chance at occupying the governor’s mansion in a Republican-controlled state.”

The past few months have seen a resurgence of a longstanding debate about the relationship between black women and political parties, particularly the Democratic Party. While black women are a crucial voting bloc capable of deciding close contests, they are sorely underrepresented in seats of political power.

Black women played a crucial role in the Georgia contest

“I always knew I would be here doing whatever I needed to help Stacey win,” says Brianna Brown, a Texas organizer who traveled to Georgia to help canvass for Abrams.

Brown, who serves as the deputy director of the community-based Texas Organizing Project Action Fund, spent the past few days in Georgia working with Glow Vote, a campaign that mobilized several black women community organizers and political strategists in support of Abrams.

In the week leading up to the primary, organizers traveled to Georgia to lead phone banks and knocked on thousands of doors in the hopes of convincing voters to show up and vote Abrams. Tracey Corder, the director of racial justice at the Center for Popular Democracy Action, and a lead organizer on the campaign, tells me that Glow Voteworked in collaboration with other efforts in the state, including the New Georgia Project Action Fund, a division of the New Georgia Project, a group Abrams founded to register voters of color and boost their turnout in elections.

Glow Vote is just one of many initiatives that backed Abrams. Last year, when Abrams announced her campaign, groups like Higher Heights and Democracy in Color quickly launched campaigns supporting her, even as critics argued that the campaigns were backing her prematurely.

But many saw Abrams as a potential winning candidate, partially because of her campaign’sefforts to connect with and persuade black voters who sat out the 2016 election. It’s something that groups like BlackPAC, which did polling and led voter engagement campaigns in black communities ahead of big victories in Virginia and Alabama last year, have stressed.

Earlier this month, BlackPAC released a poll of voters in several battleground states, finding that black voters are dealing with high levels of racial anxiety and are looking for politicians that can speak to issues like health care and the economy as well as racial justice.

In Georgia, the group poured considerable resources into Abrams, spending $1.2 million in an effort to connect with voters at the doors, over the phone, and online.

“The strength of our democracy requires diverse representation and candidates like Stacey Abrams who have a proven track record of fighting for the issues that matter to our communities,” Adrianne Shropshire, the executive director of BlackPAC, said in an email this week. “She’s run a campaign that is a model for candidates all across the country on how to engage and excite Black voters.”

It’s a model that groups like BlackPAC, Democracy in Color, and Collective PAC, which works with black political candidates, hope to see replicated later this year as candidates begin persuading voters to turn out for the midterms. And they hope it’s a strategy that will help elect black candidates, especially to the position of governor. In the history of the US, only two states, New York and Massachusetts, have had black governors. Many of these groups want to change that.

As for Abrams, the fight isn’t over. She’ll face off against the to-be-decided Republican nominee later this year. And even as she rides a wave of momentum — picking up endorsements from prominent national Democrats ranging from Hillary Clinton to Bernie Sanders — and leads a historic campaign, she’ll still be an underdog. Georgia is a state that hasn’t been very friendly to Democrats, and one where black politicians have been largely unsuccessful in their efforts to win statewide office.

But supporters of Abrams say that even if her candidacy ends in defeat, her campaign has already widened the political landscape for black women interested in running for elected office. “It’s important to be able to look to Georgia as an example both of the kind of candidate we deserve and an election that is rooted in our people,” Brown says.

Abrams, she believes, is just the beginning.

P.R. Lockhart is a Vox staff writer. “I write about race: how it intersects with gender, sexuality, and economic status, how it influences social justice movements, and how communities of color interact with and are affected by policy and politics. Before joining Vox, I covered race and politics for Mother Jones.”