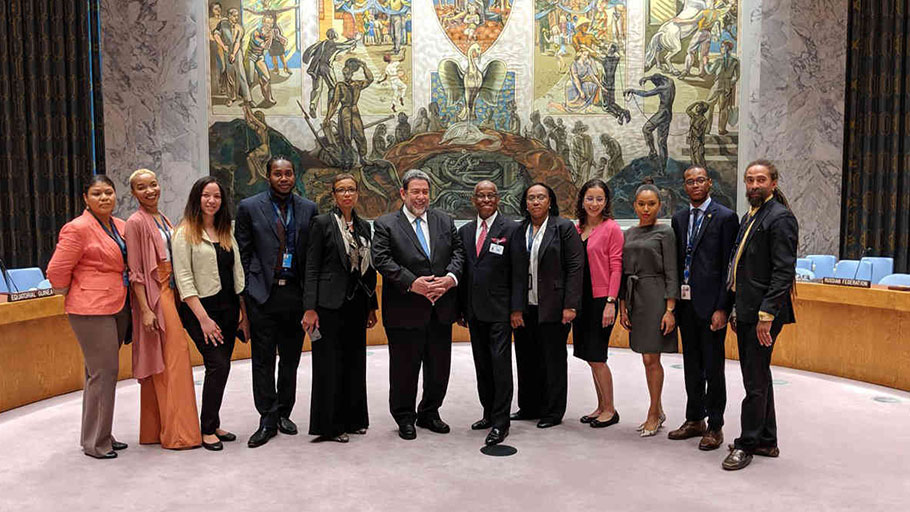 As St. Vincent and the Grenadines on Wednesday officially assumed a non-permanent seat on the United Nations’ Security Council, the country’s Ambassador to the UN, I. Rhonda King, says the “historic journey” begins with “Three Stories and a Prayer: The Manifestation of the Prophetic Imagination.”

“With the audacity of David, the widow’s faith, the spirit of Chatoyer, the prayer of Saint Francis of Assisi, we begin a historic journey,” said King in a statement, stating that St. Vincent and the Grenadines has become one of only 15 members of the most powerful organ of the United Nations.

She said that, just 40 years after achieving independence from Great Britain, St. Vincent and the Grenadines has become the smallest nation ever to serve on this prestigious body, “which is tasked with maintaining international peace and security.”

“On Jan. 2, 2020, we will plant our flag outside the Security Council chamber and take up our seat at the horse-shoe table within the chamber, where we will remain for the next two years,” said King, noting that St. Vincent and the Grenadines enters the Security Council “on the cusp of its 75th anniversary and at a time when the world is riddled with challenges, and the rules-based system is increasingly under threat on many fronts.”

While stating that St. Vincent and the Grenadines is “not without its own homegrown challenges,” King invoked “the spirit and audacity of hope,” and reflected on “what is possible and the transformative opportunity that is before us.”

The ambassador noted that, in 1763, Britain assumed suzerainty of St. Vincent and the Grenadines, and that, with the exception of a few years of French occupation (1779 – 1783), the country remained under British colonial rule until internal self-government in 1969 and constitutional independence in 1979.

On independence, she said St. Vincent and the Grenadines joined the international community, gaining “the right and assumed the immense responsibility to chart our own course in an increasingly complex world.”

King said some have even argued that small islands are not viable as independent states, but added that “we have seen, difficult though it can be, that this micro-, multi-island state has made great strides through strategic, creative and innovative measures and faith in Almighty God.”

“As a young nation, we will be remiss if we believe the fight for our independence to be [is] a done deal,” King said. “Small states, by definition, are vulnerable in a world, where international law is compromised and only might makes right.

“This makes us natural defenders of the international order that protects us,” she added. “Indeed, it is the responsibility of a small state.”

“The Small Island Developing State cannot afford to wait,” she added. “Our independence is an ongoing project that must be protected and defended, simultaneously, on all fronts.”

King said that charting St. Vincent and the Grenadines’ course through “the multifaceted challenges endemic to globalization is buttressed” by the country’s faith, alluding to a line from the national anthem: “Our faith will see us through.”

In the Bible, in 2 King 4, she noted that the prophet Elisha asked the widow: “’How can I help you? Tell me, what do you have in your house?’

“’Your servant has nothing there at all,’” she said, “’except a small jar of olive oil.’”

To that question, King said St. Vincent and the Grenadines has answered: “We have educated, creative and innovative, young men and women who speak the languages of countries from far flung places.

“We can, today, converse with the powerful, permanent five members of the Security Council, for instance,” she said. “We can speak Russian, Mandarin, French and English, and we speak Spanish, too.”

The Vincentian ambassador said small St. Vincent and the Grenadines takes “to the high table (of the Security Council) the fresh perspectives of a Caribbean society which, according to George Lamming, ‘was perhaps the first global experiment in human history’”. Lamming is a renowned Barbadian novelist, essayist and poet.

King said St. Vincent and the Grenadines is “a nation epitomized by the resilience of its people,” and that it is also “a nation forged through the resistance of a people led by (Carib) Chief Joseph Chatoyer (the sole national hero) to become the nation with perhaps the shortest period of organized slavery in the modern world.”

Additionally, the diplomat said the people of St. Vincent and the Grenadines are part of the Sixth Region of Africa, also known as the African Diaspora, stating that more than 50 percent of the United Nations Security Council’s agenda today comprises conflicts on the African Continent.

“Today, this nation (St. Vincent and the Grenadines) can stand up for and with the people of Africa as an elected member of the United Nations Security Council,” King affirmed, adding that it is “a manifestation of the prophetic imagination.”

“And, so, with ‘the songs of Caribs, the rhythm of Africa, the chords of Asia, the melody of Europe and the lyrics of the Caribbean itself, we go forth,” she said, waxing eloquence.

“This uniquely blended psyche makes our nation, Hairouna, the land of the blessed, ideally suited to the task up ahead,” she added. “We embody the world. We go forth to create transformative, resilient new realities by becoming more the transformed, resilient people we are destined to be.

“On Jan. 1 another important chapter in the history of our nation begins,” King proclaimed. “To God be the Glory. Peace Profound.”

In October, the Permanent Mission of St. Vincent and the Grenadines to the United Nations began its three-month observation period of the UN Security Council.

The mission said in a statement that the Oct. 1 to Dec. 31, 2019 observation was ahead of officially taking up the country’s two-year seat on the Security Council on Jan. 1, 2020.

“St. Vincent and the Grenadines is a small country that consistently punches above its weight in international affairs,” the statement said. “The state uses the tools of diplomacy and multilateralism to advance its interests in the global arena.

“While SVG (St. Vincent and the Grenadines) is small, the combination of our history, experiences, and perspectives – which we refer to as a ‘small island exceptiona­lism’ – compels us to lift our voices and share our unique opinions on the issue of climate change and its implications for global peace and security,” the statement added.

“This is why at the United Nations General Assembly (UNGA), 185 countries elected St. Vincent and the Grenadines for a non-permanent seat on the UN Security Council,” it continued. “We consider this not only a privilege but an important responsibi­lity.”

In the country’s 40th year of independence, the mission said St. Vincent and the Grenadines is “proud to be counted as an equal participant in the international community.

“We reiterate the position advanced by our prime minister that ‘we are not better than anyone, but no one is better than us’”, it said.

The Mission to the UN said it will continue to lift SVG’s international profile, as it works with its partners to uphold international law and the principles of sovereign equality.

“We are friends of all, and we continue to strive for a better world,” it said.

Jubilation ripped through the Vincentian community at home and in the Diaspora last June when St. Vincent and the Grenadines was elected as a non-permanent member of the United Nations’ Security Council.

“We had an excellent result,” Sir Louis told Caribbean Life in an exclusive interview. “We give God thanks and thank the GRULAC (Group of Latin America and Caribbean) and all countries. Many of them have come to us and said they were pleased with the result, notwithstanding El Salvador’s stance.

“It’s an historic occasion, and we’re very, very pleased,” added the Deputy Prime Minister, who was with Prime Minister Dr. Ralph E. Gonsalves, Culture and Sports Minister Cecil “Ces” McKie and other Vincentian diplomats at the UN for the extraordinary vote.

Sir Louis said just hours before the historic vote, El Salvador said it would challenge St. Vincent and the Grenadines for the one open seat in GRULAC.

UN diplomats had expressed surprise about El Salvador’s last-minute move in light of the fact that the regional bloc had agreed in December 2018 to endorse St. Vincent and the Grenadines as the regional candidate.

El Salvador only garnered six votes among the 193 cast by secret ballot.

UN General Assembly rules state that candidates running for a seat on the Security Council must win a two-thirds majority of votes to succeed, even if they are running uncontested.

With the historic vote, St. Vincent and the Grenadines became the smallest country ever to hold a Security Council seat.

St. Vincent and the Grenadines is 150 square miles in size and has a population of about 110,000.

Other countries elected in the June vote in the UN General Assembly were Estonia, Niger, Tunisia and Viet Nam.

The four states, along with St. Vincent and the Grenadines, took up their seats as non-permanent members of the Security Council on Jan. 1, 2020, replacing Cote d’Ivoire, Equatorial Guinea, Kuwait, Peru and Poland, the UN said.

Every year, five countries are elected to the 15-member Council (10 of whom are non-permanent) for a two-year term, according to a geographical rotation set by the General Assembly in 1963.

The UN said this is to ensure fair regional representation: five from African and Asian and Pacific States; one from Eastern Europe; two from Latin American States; and two from Western European and Other States (WEOG).

While Niger, Tunisia and Viet Nam were elected unopposed, according to the UN, two of the five seats were contested: El Salvador competed with St. Vincent and the Grenadines to represent the Latin American and Caribbean group (GRULAC); and Romania lost out to Estonia in the East European group.

Five permanent members of the Security Council are: China, France, Russian Federation, the United Kingdom and the United States.

“We’re committed to the principle of the equality of state,” Gonsalves said. “We intend to work closely with many countries of the Security Council.”

With St. Vincent and the Grenadines’ election, Straker re-emphasized that his country “will have a voice on the Security Council in terms of Climate Change.

“We’re now on the world’s stage, where we can make a contribution,” he stressed.

This article was originally published by Caribbean Life News.