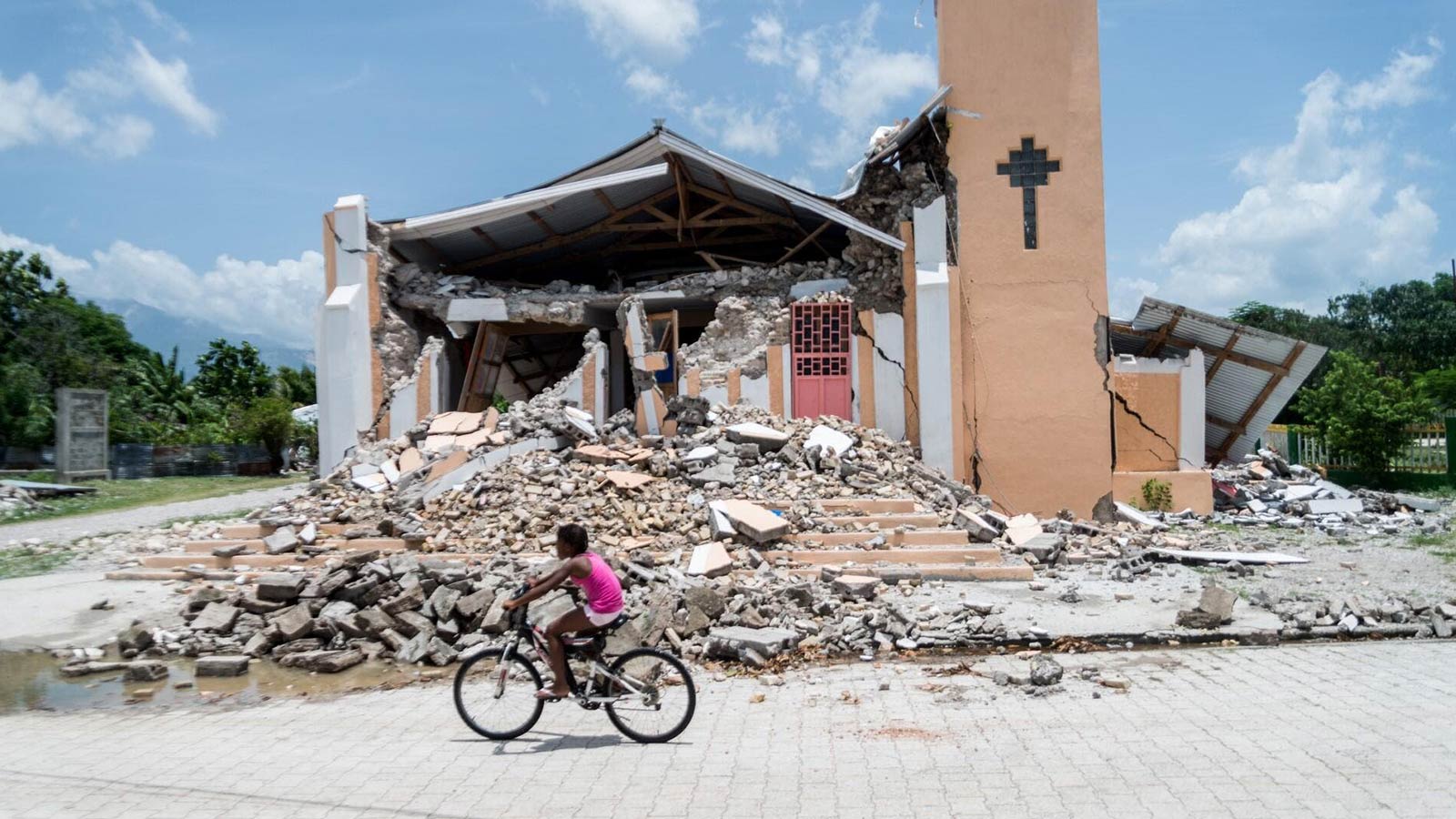 The disasters in Afghanistan and Haiti share the same twisted root

You Are Here: Home » Blog » Editors' Choice » The disasters in Afghanistan and Haiti share the same twisted root

Half a world away from one another, the citizens of two nations are suffering as a result of the corruption and incompetence of the U.S.

Last week, the world shook twice. The first shock hit Haiti, when a 7.2 magnitude earthquake erupted beneath the island’s southern peninsula. Homes, churches, and hotels crumbled in the cities of Les Cayes and Jérémie and in nearby villages. More than 2,189 people have perished; that toll is expected to rise.

The next disaster struck a few hours later and eight thousand miles away. After 20 years of war, the Taliban entered Kabul, as the U.S.-backed government and the Afghans who depended on it for protection fled for their lives. Video captured civilians clinging to the side of a U.S. Air Force transport plane, preferring to risk falling to their death rather than face the horrors that awaited them.

At first blush, these situations could not have seemed more different to Americans, watching events unfold on our devices from far away. But there is a deep and indelible connection between the two crises: an American one. Both Haiti and Afghanistan owe their sorry conditions to decades of direct U.S. control. Looking closely at the links between the two is essential for understanding how to respond to each in ways that help, rather than do more harm.

The longest continuous U.S. military occupation, until the record was surpassed in Afghanistan last year, had been in Haiti, which unlike other places the U.S. invaded and held for longer, was never formally colonized. (The start and end dates of the U.S. occupation of Nicaragua were technically further apart—beginning in 1912 and ending in 1933—but the force was reduced to just a hundred Marines in the capital for much of that time.)

Marines invaded the Black Republic in 1915, on the pretext of restoring order after a presidential assassination. The occupation, as the Wilson administration officially called it, would last 19 years. Its real goals were openly talked about in Washington: keeping out European influence, securing the route to the just-opened Panama Canal, and ensuring payments to U.S. creditors—especially the National City Bank of New York (now Citibank). At the same time, the Americans promised humanitarian dividends for the Haitian people: new roads and schools, public health, improved agriculture, and democratic development. Those same promises were dusted off 86 years later when George W. Bush justified the invasion of Afghanistan.

As in Afghanistan, the responses of the Haitian people to the U.S. invasion varied. Some were eager to collaborate, seeing an opportunity to outflank rivals, make money, and improve their lives with the help of foreigners who promised to respect the rule of law. Others were not as enthusiastic. Guerrilla fighters known as Cacos mounted an insurgency in the mountains of northern Haiti, a terrain almost as impenetrable to the Marines of that era as Afghanistan’s Hindu Kush mountains are in ours. In response, the Marines developed a suite of military, political, and psychological tactics aimed at crushing the resistance and cutting it off from the people. These became the basis for what is now known as counterinsurgency doctrine.

The Americans quickly realized that even with overwhelming force and these new tactics, they—and the Haitian puppet president they had chosen—would not be able to control the mountainous country on their own. They assembled a client army, the Gendarmerie d’Haïti, consisting of Haitian enlistees trained and commanded by U.S. Marines. This force would serve as the model for U.S. client militias across Latin America and, eventually, beyond. Their successors included the former Army of the Republic of Vietnam and, until this week, the Afghan National Security Forces, or ANSF.

The Gendarmerie served as shock troops against the Cacos, depending—as the ANSF later would in its fight against the Taliban—on U.S. air power. In the 1910s, that took the form of biplanes armed with machine guns and hand-dropped bombs. (The Marines invented dive-bombing during the campaign.) Whole villages were burned. Anyone suspected of organizing against the occupation was shot or imprisoned, often in forced labor camps.

After the Taliban swept through Afghanistan this month, some analysts singled out for criticism the Afghan Constitution—a document aimed at reshaping the country’s loose confederation of tribes into a Western-style centralized state, enacted in 2004 under Washington’s eye and based on a framework agreed upon at a United Nations conference in Bonn. In Haiti, the Americans imposed a constitution more directly: The Marine-led Gendarmes dissolved Haiti’s National Assembly at gunpoint, allowing a State Department–written constitution to be enacted without legislative approval. (That constitution’s most important provision was to permit, for the first time in Haiti, foreigners to directly own land.)

The U.S. occupation of Haiti ended in 1934, brought down not by Haitian resistance but by American discontent. Though then, as now, few Americans fully understood what their government was doing overseas in their name, enough reports of U.S. atrocities had made it back to the U.S. (thanks especially to the anti-occupation advocacy of the National Association for the Advancement of Colored People) to force congressional hearings. It took several more years for the administration of Franklin Roosevelt (who had helped oversee the occupation as assistant secretary of the Navy) to officially pull the plug.

While the U.S. government and private banks achieved many of their goals in Haiti, none of the benefits promised to Haitians were realized in a durable way. As Major General Smedley Butler—who founded the Gendarmerie and received his second Medal of Honor in Haiti, only to become a critic of war and U.S. foreign policy—would later say, the Marines’ chief accomplishment was to make Haiti “a decent place for the National City Bank boys to collect revenues in.”

The balance sheet is similar in Afghanistan, where the clearest winners of the war have been defense contractors, who made billions in revenue and whose workers outnumbered “soldiers in Afghanistan three to one.” As Sarah Chayes, who spent years living in and reporting on Afghanistan, and was later a special adviser to Admiral Mike Mullen when he was the chairman of the Joint Chiefs of Staff, wrote this week: “What flourished on our watch? Cronyism, rampant corruption, a Ponzi scheme disguised as a banking system, designed by U.S. finance specialists during the very years that other U.S. finance specialists were incubating the crash of 2008. A government system where billionaires get to write the rules.”

In Haiti, the institutions the Americans destroyed were never fully rebuilt. Just as in Afghanistan, where, journalist Anand Gopal has argued, U.S. tactics paradoxically broadened support for the Taliban, the legacy of U.S. abuses in Haiti planted the seeds for extreme ideological movements. One of those was an authoritarian Black nationalism, as exemplified by the dictator François Duvalier, who took power with the aid of the country’s American-made military in 1957. For 29 years he, and later his son, further centralized power and resources in the capital. They oversaw a kleptocratic regime that starved the Haitian state, often with the support of U.S. presidents who valued their anti-Communist leanings during the Cold War. In particular, the Duvaliers’ systematic theft from a government-controlled market of building materials led to a Haitian culture of builders “making do with less”—leading to the construction of buildings unable to withstand earthquakes, as the historian Claire Antone Payton has written.

Those factors, exacerbated by repeated U.S. interventions since, created the conditions that make Haiti so vulnerable to disasters. They are why, in January 2010, the earthquake that struck Port-au-Prince—a temblor that would have been largely survivable in San Francisco—became the deadliest ever recorded in the Western Hemisphere. They are why Haiti was vulnerable to further destabilization from a shambolic, self-serving, U.S.-led response that further weakened Haiti’s institutions. The vacuum of political legitimacy created by the assassination of President Jovenel Moïse—which further hollowed out the Haitian state just before the latest earthquake struck—stems in large part from direct U.S. manipulations in the elections that brought his tiny party to power.

Looking at both of these recent crises through that lens clarifies what kind of response is needed. It puts the lie to the idea that Haiti or Afghanistan are naturally “failed states,” waiting around for paternalistic aid, pity, or scorn. Instead, a bright light has been shone on our obligations: to make real restitution to the millions harmed in our name and to accept as refugees those we left behind. Grappling with the U.S. role in creating the emergencies that rocked the world this week isn’t easy. But it is the only way to start making amends—and to mitigate the next shocks before they happen.

Jonathan M. Katz is the author of the upcoming Gangsters of Capitalism: Smedley Butler, The Marines, and the Making and Breaking of America’s Empire. He was the Associated Press correspondent in Haiti during the 2010 earthquake and now writes the Long Version newsletter at katz.substack.com.