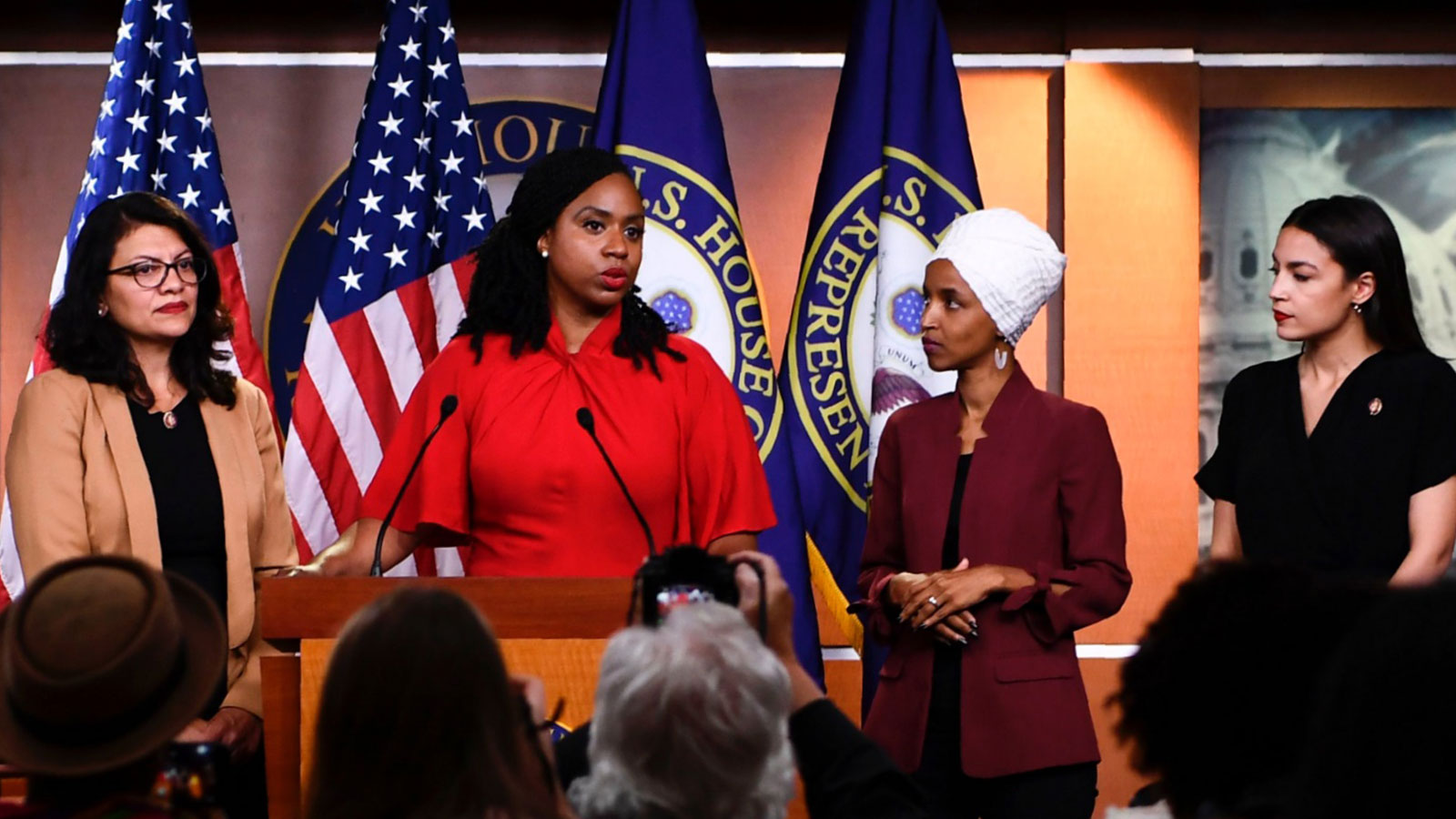 How women of color in Congress are pushing a grassroots agenda

You Are Here: Home » Blog » Commentaries/Opinions » How women of color in Congress are pushing a grassroots agenda

Despite roadblocks, “the Squad” has pushed progressive legislation, scrutinized the powerful, and changed the conversation around who gets to hold political power.

If Donald Trump’s 2016 presidential election victory was a political earthquake that shattered norms and expectations, the 2018 midterm wins by four women of color ought to be seen as a similarly earth-shattering occurrence. Alexandria Ocasio-Cortez of New York, Ayanna Pressley of Massachusetts, Rashida Tlaib of Michigan and Ilhan Omar of Minnesota won seats as Democrats in the House of Representatives, bringing with them a political sensibility that had traditionally been dismissed as too radical. Ocasio-Cortez and Pressley, in particular, beat incumbents who were establishment favorites within the Democratic Party, turning their lack of federal political experience from a liability into an asset.

Two years after their first wins, all four members of the so-call

ed “Squad” handily won reelection, suggesting that the progressive platforms they brought to the House of Representatives are indeed popular. Tlaib and Ocasio-Cortez’s membership within the Democratic Socialists of America may have even been an advantage among voters weary of pro-Wall Street lawmakers.

With two elections under their belts, how much success has the Squad had at enacting the change that its grassroots constituents want? And what is the potential for their progressive brand of politics to transform Congress?

There has historically been a tendency among left-wing activists to dismiss progressive change through electoral politics and to embrace the mantra that “change happens in the streets and from the ground up,” not through elections and political power. Barack Obama’s presidency is a case in point. What began with a visionary promise of defeating the regressive politics of George W. Bush ultimately resulted in a whimpering acceptance of the limits of pragmatism. Many on the left felt vindicated in remaining focused on organizing as outsiders.

But then came Trump, a political newcomer who demolished all notions of decorum, refused to adhere to the status quo, and ushered in a shockingly effective wave of White supremacy more terrifying than most of us had seen in decades. Trump wielded his executive power like a weapon, leaving communities of color reeling. Street protests alone were not enough to counter this level of authoritarianism. It seemed for many activists and nonvoters alike an opportune time to bring the movement into Congress. In a 2019 op-ed for The New York Times, historian Barbara Ransby referred to the Squad as, “products of the Movement for Black Lives, #MeToo, Occupy Wall Street, and an increasingly militant immigrant rights movement.”

Huwaida Arraf, a Palestinian American attorney and activist based in Michigan, campaigned for Tlaib and saw her as, “very connected to her constituency.” According to Arraf, Tlaib “has been advocating on racial justice and social justice issues long before she became a congresswoman.” In fact, Arraf sees Tlaib as deeply connected to her voters. “She shows up for them, and they show up for her,” she says.

Motivated to run for congressional office by Trump’s racist actions, Tlaib was among several women who confronted him during a campaign speech in 2016. She explained her actions later in an op-ed, “Trump has created an atmosphere wherein my sons are questioning their place and identity as Arab Americans and Muslims.” And after being elected to the House as the nation’s first Palestinian American representative, Tlaib, for two years, consistently demanded his impeachment.

She went on to open free neighborhood service centers in her district, and sponsor and introduce legislation to stop Trump from sending armed forces to Detroit to counter Black Lives Matter protests, and prevent water services from being cut off to low-income consumers during the pandemic—both of which passed the House. Tlaib’s Payee Fraud Prevention Act, which protects seniors was even signed into law, a rare victory for the progressive newcomers.

Together, the four congresswomen have backed “the BREATHE Act,” which was crafted by the Movement for Black Lives and takes on racist police brutality, reallocates police funding, and establishes a commission on reparations for mass incarceration (so far the act has not been formally introduced). They have also introduced the People’s Housing Platform to tackle rising rents and the lack of availability of public housing, and they continue to introduce and co-sponsor other bills furthering social justice in spite of opposition to most of them in the House and Senate.

The fact that these progressive women of color won their seats in Trump’s presidential tenure clearly implies a progressive backlash against conservatism and White supremacy. But it is also a definite break from the ineffective centrism of the Democratic Party that has paid lip service to progressive ideals and more often than not, has done nothing to enact them. The women have had to face the racist vitriol that became a signature of Trumpism and walk a tightrope within the Democratic Party by joining their colleagues in presenting a united front against Republicans while simultaneously trying to push a progressive legislative agenda from within, often in opposition to their fellow Democrats.

Making a Difference Despite Opposition

It is not as if Congress had no progressive women of color before the Squad emerged. Lawmakers such as U.S. Rep. Barbara Lee of California, and U.S. Rep. Pramila Jayapal of Washington have a track record of pushing progressive legislation. But numbers matter, and the emergence of the Squad arguably doubled progressive representation by women of color and went on to pave the way for more women such as Cori Bush (D-MO), who recently won an election as Missouri’s first Black congresswoman, as well as progressive men of color like Jamaal Bowman (D-NY) who is the sole man in the newly expanded Squad.

Nina Turner, former Ohio state senator and former national surrogate for Bernie Sanders’ presidential campaign, is now running for a special election in Ohio and hoping to increase the ranks of the Squad in the face of centrist Democratic opposition.

“The party is not homogeneous, so we know we have our moderates and we have our progressives, Turner told me in an interview. “We have some people who we might even question, are they really Democrats?” Among those Turner says are Kyrsten Sinema and Joe Manchin, Democratic senators from Arizona and West Virginia respectively. Both have emerged as obstructionists to progressive legislation, what Turner pinpoints as the greatest obstacle to forward-thinking lawmaking in D.C.

In light of the undemocratic nature of the Senate, where it is said that most progressive bills go to die, the question of whether or not the Squad has furthered a social justice agenda at the federal level is contingent on whether or not one can effect political change from within the system. It is possible, says Brooke Adams, the movement politics director at People’s Action.

“Federal strategy can be developed nationally… [but] organizing really has to be driven and led locally because it’s rooted in relationship-building,” Adams explains. People’s Action has a strong relationship with all four members of the Squad, and Adams says she believes the lawmakers have remained accountable to grassroots communities. For example, Ocasio-Cortez joined People’s Action’s “deep canvassing” work ahead of the 2020 election and helped to defeat Trump at the polls. Adams also cites Tlaib’s Payee Fraud Prevention Act victory as an example of how she has remained accountable to her constituents.

Beyond legislation, Adams goes on to explain how Squad members have “elevated critical ideas into the public consciousness such as the Green New Deal.” She adds that the progressive lawmakers have also been, “some of the most effective members in congressional hearings, digging into the issues affecting working families and holding powerful actors accountable.”

Ocasio-Cortez’s hard-hitting questioning of Facebook founder Mark Zuckerberg over his platform’s courting of White supremacists was one of many instances where Squad members have been formidable proponents of racial justice in the public sphere. U.S. Rep. Omar too has made waves by confronting her party’s tolerance for racist police brutality. The Movement for Black Lives in July 2021 hailed as a measure of its success, the fact that, “a new generation of movement-aligned Black leaders was elected to Congress,” and cited members of the Squad and some of its newer allies by name.

Even if sweeping progressive legislation has remained elusive, a case can be made about the cultural shift that Squad members have had via their mere presence in the House. “We can’t underestimate the power of representation,” says Arraf of Tlaib. “Just being a proud Palestinian American, a Muslim, and a woman of color in the halls of power, has given so many a feeling of having a seat at the table through her.”

Adams says their presence has definitely shifted the conversation about who gets to have power at the federal level. “They’ve changed the public’s idea of what it means to represent real, working people,” she says.

And Turner is campaigning on such representation. She describes herself as a “hell-raising humanitarian,” who “will not equivocate…on Medicare for All, on increasing the minimum wage, etc.”

The Long-Term Game for Progressive Change

Although promising that one will remain firm on important progressive issues is easy, once in office the reality is more complex. Some on the left denounced what they saw as Ocasio-Cortez’s capitulation on health care when she rejected their call to demand that U.S. Rep. Nancy Pelosi hold a vote on a Medicare for All in exchange for supporting Pelosi’s bid to remain House Speaker. Ocasio-Cortez maintained that there were simply not enough votes to pass such a bill—an argument that her leftist detractors dismissed.

If the Squad remains small, its influence will likely remain largely symbolic. “We need to elect more people like [them]. That’s how power works,” says Adams. “We need an actual slate that has enough power to govern for us to win meaningful legislation.” But she acknowledges that, so far, the progressive women of color and other progressive members in the House have won races in what are deemed “safely blue” districts where Democratic voters remain a strong majority.

“We actually need to be finding people like Rep. Bush in Republican-held swing districts,” says Adams, who admits that center-right Democrats like Sens. Sinema and Manchin, “are making the argument that the progressive agenda can’t win in places where it ‘really counts for the party.’”

The answer to whether one can effect change from the inside is inevitably complicated. In an institution that breeds concession, the Squad has its work cut out in representing its uncompromising base. But it’s not impossible.

Progressives may be able to achieve political change through the electoral system if the Squad remains true to its base and expands its size. Otherwise, social movements run the risk of exhausting their resources on elections for naught.

“There are many things that we can do together if in fact we are not so caught up on what is the particular ideological strata within the [Democratic] party and focus on the needs of the people,” Turner says.