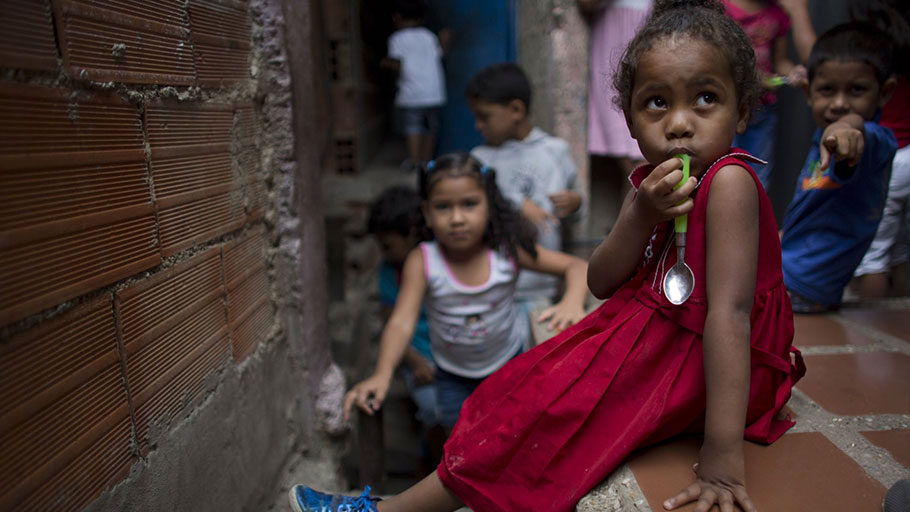 The fallen metropolis: the collapse of Caracas, the jewel of Latin America

You Are Here: Home » Blog » Editors' Choice » The fallen metropolis: the collapse of Caracas, the jewel of Latin America

Slum dwellers are fleeing the country because of the lack of food, medicine and work. Photograph: Ariana Cubillos/AP

Once a thriving, glamorous city, Venezuela’s capital is buckling under hyperinflation, crime and poverty

By Tom Phillips, The Guardian —

A portrait of Hugo Chávez and a Bolivarian battle cry greet visitors to the Boyacá viewpoint in the mountains north of Caracas. “It is our duty to find one thousand ways and more to give the people the life that they need!”

But as Venezuela buckles, Chávez’s pledge sounds increasingly hollow. Vandals have splashed paint into the comandante’s face and beneath him Venezuela’s capital is dying.

“A ghost town,” laments Omar Lugo, director of news website El Estímulo, during a night-time driving tour of a once-buzzing metropolis being eviscerated by the country’s collapse. “It pains me so much to see Caracas like this.”

A generation ago, Venezuela’s capital was one of Latin America’s most thriving, glamorous cities; an oil-fuelled, tree-lined cauldron of culture that guidebooks hailed as a mecca for foodies, night owls and art fans. 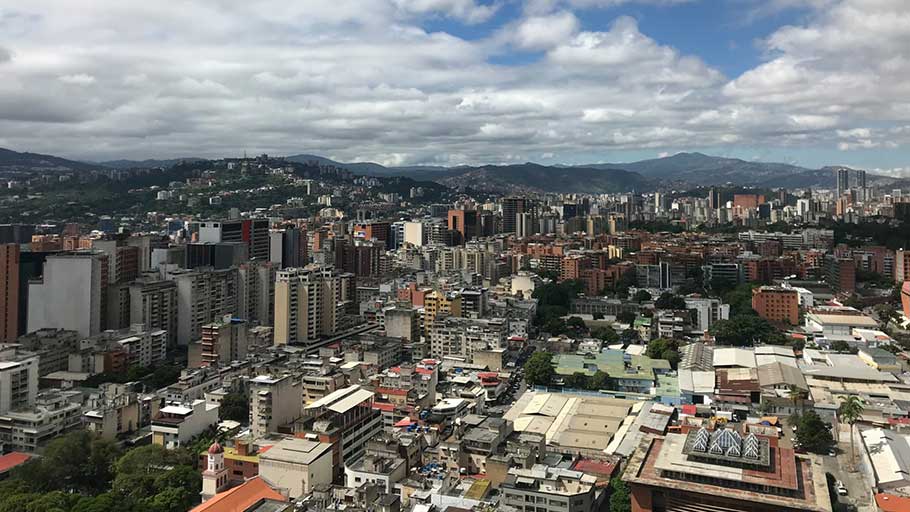 A view west across Caracas, which was once a buzzing metropolis. Photograph: Tom Phillips

Its French-built metro – like its restaurants, galleries and museums – was the envy of the region. “Caracas was such a vibrant city … You truly felt, as we used to say around here, in the first world,” says Ana Teresa Torres, a Caraqueña author whose latest book is a diary of her home’s demise.

In 1998, as the setting for his election celebrations, Chávez chose the balcony of the Teresa Carreño, a spectacular, brutalist style cultural centre. Built during the 1970s oil boom and reminiscent of London’s Queen Elizabeth Hall, it has hosted stars such as Dizzy Gillespie, George Benson, Ray Charles and Luciano Pavarotti, and epitomised the country’s new ambition. “Venezuela is reborn,” Chávez declared.

Twenty years after that upbeat address, an economic cataclysm experts blame on ill-conceived socialist policies, staggering corruption and the post-2014 slump in oil prices has given Caracas the air of a sinking ship.

Public services are collapsing, businesses closing and residents evacuating on buses or one of a dwindling number of flights still connecting their fallen metropolis to the rest of the world.

“It’s a feeling of historic frustration,” sighs Lugo as he steers through shadowy streets counting the apartments where the lights are still on. “A country that performed a miracle in reverse – it’s just impossible to believe.”

Caracas’s crash has left no community unscarred, from its vast redbrick shantytowns to leafy middle- and upper-class areas such as La Florida.

Luis Saavedra, a former oil industry security consultant, said his 13-storey apartment block had lost more than half of its residents since Venezuela entered an economic and political tailspin after Nicolás Maduro took power following Chávez’s death in 2013. 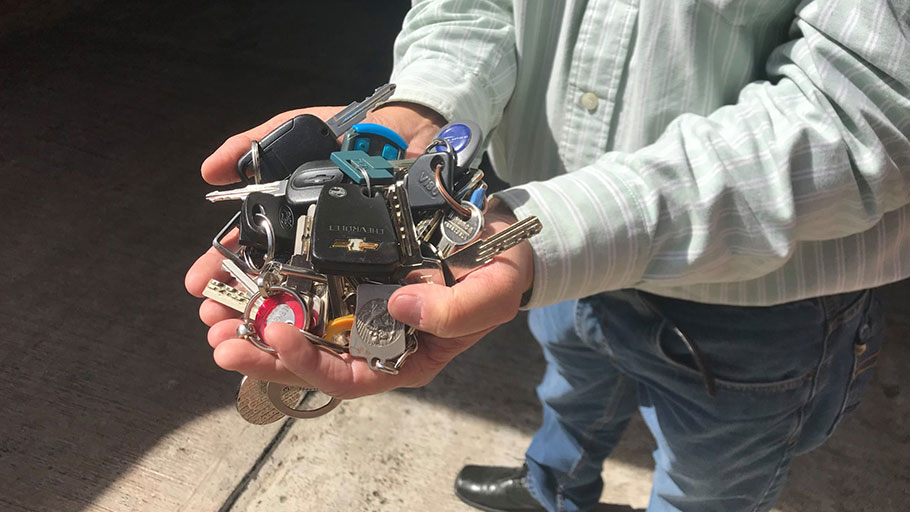 Luis Saavedra, 65, holds the keys to the apartments and vehicles he now cares for in Caracas after their owners fled overseas to escape the crisis. Photograph: Tom Phillips

“This populism – this so-called socialism – has finished off our country,” Saavedra, 65, complained as he showed the Guardian around one of five empty homes he now cares for. “It isn’t finishing the country off. It has finished it off.”

Inside the flat, cream sheets had been draped over sofas to shield them from dust. Abandoned family photographs offered hints of a life recently interrupted by Venezuela’s decline. “They couldn’t carry on living here. They’re in Porto,” Saavedra sighed. “Such a shame.”

Saavedra, whose two daughters live in Spain, said he was now reluctantly considering joining a historic exodus the UN says has swollen to 3 million – nearly 10% of Venezuela’s population or an entire pre-crisis Caracas – since 2015.

Soaring crime and the breakdown of a city where even those regarded as well-off now often live without water or power meant he saw few alternatives. “It’s astonishing. By 6 or 7pm you don’t see any more cars on the streets and by 8pm it’s completely deserted. This is a capital city that used to have a night life. Not anymore. Everyone’s holed up at home.”

Saavedra recalled returning from a recent trip to Miami to find Caracas’s international airport – once linked to Paris by six-hour Concorde flights – cloaked in darkness due to a power cut. “The people at customs couldn’t even inspect us because there was no light!” he scoffed. “We’ve stopped [in time], gone back 40 years and are heading back to the dark ages.”

When he took power in 1998 Chávez declared war on the “immense poverty” that blighted his homeland despite its vast oil wealth. But Caracas’ slum dwellers are now fleeing too, forced overseas by a lack of food, medicine and work, a collapsing public transport system and hyperinflation the International Monetary Fund fears will hit 10,000,000% in 2019.

Solangel Jaspe, the deputy head of a Catholic school in the deprived and notoriously violent Cota 905 neighbourhood, said she had begun the year with 909 students. “Today it is 829 and falling.”

Only that morning, the parents of nine children said they were dropping out: six because they were leaving the country – for Colombia, Chile and Peru – and the other three because they could no longer afford the fees or find transport.

We look like down and outs. There are people eating rubbish Music teacher, Armando Martínez

Staff shed tears as they described seeing children turn up for class only to faint because they had not been fed. “They are the future of our country,” said William Orozco, a 57-year-old teacher at Paulo VI College. “It breaks my soul.”

A colleague, Luisa Valdéz, said many were being cared for by grandparents because their parents were seeking “better horizons” overseas. “I don’t have the words to explain what is going on,” said Valdéz, whose sons live in Ecuador and Argentina, gasping and covering her face to mask her grief. “It’s horrible. I’ve never lived through anything like it … It’s so hard. But we have to ask God for the strength to go on.”

Armando Martínez, a music teacher who lost 8kg last year because of the so-called “Maduro diet”, said staff were also struggling. “A litre of milk costs 280 soberanos (about 73 pence), a box of eggs is 1,000, a kilo of cheese 1,000. If I buy this, that’s my whole monthly salary.”

New clothes had become an unthinkable luxury, added Martínez, whose left sole was peeling off his shoe. “We look like down and outs. There are people eating rubbish,” he said. “This is no life for a child.”

The elderly have been hit too.

One recent lunchtime, pensioners came to a food bank in the eastern district of Chacao to collect supplies provided by the local council and members of the diaspora. Among them was Rosemarie Newton, a retired language teacher who had signed up because she could no longer afford to eat. 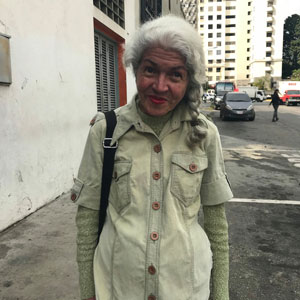 Rosemarie Newton, a former language teacher, has lost 14kg as a result of being reduced to eating one meal a day. Photograph: Tom Phillips

“My dear, I feel so sad about this because I lived the good times in Venezuela … the money ran everywhere,” the 73-year-old said, recalling when her country had been known as Saudi Venezuela.

No more. Newton said her weight had fallen from 50kg to 36kg. “I was so skinny my friends couldn’t believe it … I was reduced from three meals to practically one meal a day.”

“Every day food is more expensive. Prices change from week to week. The expected inflation for next year is a million per cent,” Newton added, in fact underestimating official projections. “Just imagine that. A lot of people are going to simply die of hunger.”

Newton, whose father was a British economist, said she would not abandon Venezuela, the country of her birth, for the UK. “It’s the climate that makes me think twice,” she joked.

But political change was needed, fast. “The government has shown us that they cannot manage – everything has gotten out of hand,” Newton said. “The situation is unbearable.”

Even the Teresa Carreño, the once dazzling theatre where Chávez launched his Bolivarian revolution, has been laid low.

Former director Eva Ivanyi recalled it being conceived in the 1970s as South America’s answer to Milan’s La Scala. “It symbolised the future. It signified civilisation. It signified Europe. It signified success,” she said. “It was like a step towards modernity – the future the country aspired to.”

Today the cultural complex has fallen into disrepair and neglect, and is used mostly for political galas singing the praises of a socialist party that has overseen Venezuela’s collapse. “What was the continent’s most notable cultural centre has become a platform for a bunch of swines and liars,” one Venezuelan journalist recently fumed.

Outside, the stairwell to the balcony where Chávez delivered his post-election address reeks of urine and has been defaced by taggers who have written “Fuck police”. In a squatted building over the street – once the HQ of Venezuela’s state-run airline, Viasa – special forces recently gunned down at least eight people, a reminder that Caracas has become one of the world’s deadliest cities.

Ivanyi said she believed the good times would one day return: “There are some things that you just can’t destroy.” 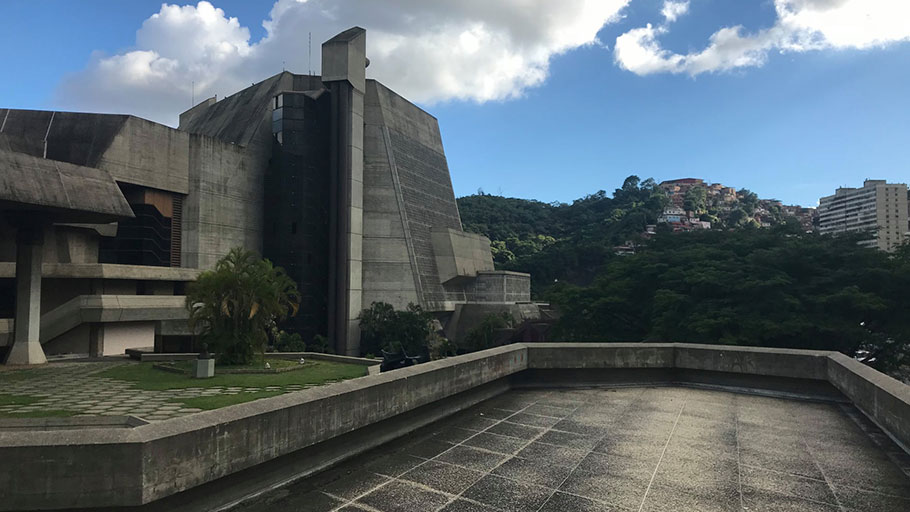 But when might that day come? “Ah, I don’t know. When this government is over and we have someone who starts to think about restructuring the country,” she said.

“The day that the water, the electricity, the food distribution system – the basic things human beings need to exist – start to work better then we can start thinking about culture again. Right now, it’s clearly not a priority.”

Orozco, the teacher, took part in last year’s fruitless anti-government demonstrations and said his priority was to stay and fight for his pupils and country. He saw two possible solutions to Venezuela’s woes – international help and Maduro’s exit. “We want Maduro out because he has turned this country upside down.”

Torres, the author, imagined either the optimistic path of a political transition that brought some economic stability, or the realistic one of continued collapse, deprivation and, perhaps eventually, some kind of foreign intervention. “If nothing changes [Venezuela] could become the poorest country in the world,” she warned. Torres said she remained reluctant to abandon Caracas even though her children left for Canada a decade ago: “I belong to this country, for better or worse.”

But as the crisis worsened and “diplomatic pressure” from her offspring intensified she sensed the day of her exit was drawing nearer.

“It will be very painful, very difficult to go through with – but I suppose this is what will end up happening in the end,” she admitted.“[Caracas] is a city that is dying, little by little.”